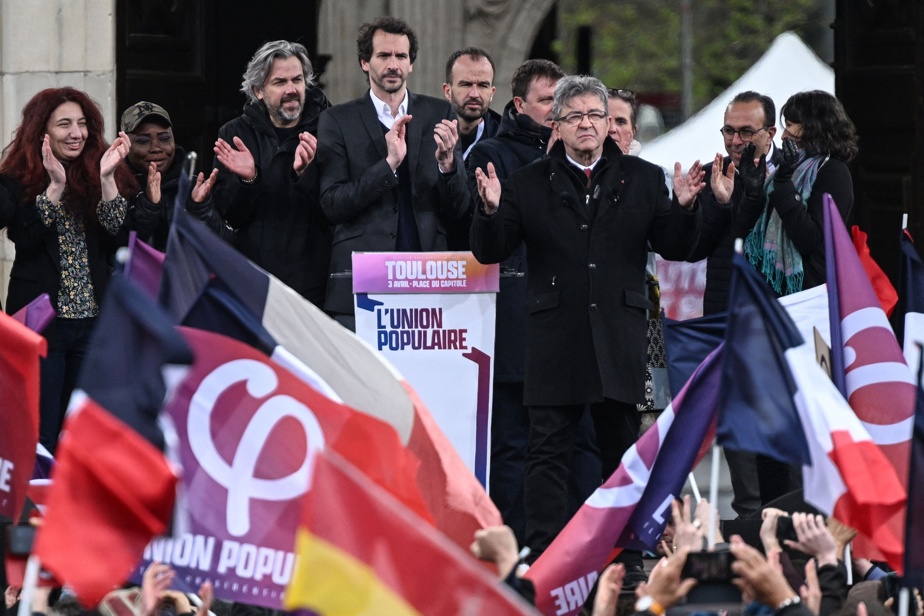 (Paris) Five days before the first round of the presidential election in France, Jean-Luc Mélenchon, leader of the radical left, is trying to interfere between his far-right rival Marine Le Pen and outgoing President Emmanuel Macron, whose gap is closing in the polls.

The leader of the party La France insoumise (LFI) does not want to believe that the second round will be played, as in 2017, between Mr. Macron and Mr.me Le Pen: “That will not happen, Macron / Le Pen”, he estimated on Sud Radio on Tuesday.

Given third in the polls, he held Tuesday evening in Lille, in the north, the last major rally of his campaign by multiplying in 11 other cities thanks to holograms, a scenography already adopted during the 2017 campaign, in order to reach as many voters as possible.

“I think I have a very serious chance of getting there and that Mr. Macron would do well to ask himself if he is really certain that he will be there. Look at the curves,” he said.

Credited with more or less 16% of the voting intentions, Jean-Luc Mélenchon thus completes a marathon of weekly gatherings started in January, which each time brought together thousands of people.

This French presidential campaign is extraordinary, in times of COVID-19, hit hard by the war in Ukraine. The 12 contenders for the French presidency must mobilize their supporters, seek out the undecided and those tempted by a potentially high abstention.

For Mr. Mélenchon’s party, the objective is to impose it as the only left capable of qualifying for the second round and embodying the “useful vote”. Enough to attract the wrath of the socialist candidate Anne Hidalgo, who accuses her rival of having “fractured” the left and of having “never wanted to make an alliance”.

The fact remains that he is still outdistanced by the candidate of the National Rally (RN), Marine Le Pen, on an upward dynamic in recent weeks, credited with 20-23% of voting intentions while Emmanuel Macron gives ground to 27% or 28%, according to recent polls.

It is precisely to the voters of Mme Le Pen that Jean-Luc Mélenchon addressed on Tuesday evening. “Listen to you, the angry not fachos, where do you find anything in the speech of this woman that is not entirely tinged with class contempt”, thundered the leader of LFI.

Macron absent from a political program

In the second round, the president-candidate continues to be ahead of the far-right candidate, according to two opinion polls published on Tuesday: 56% against 44%, for Ipsos Sopra-Steria and 53% against 47%, according to Elabe.

A gap reduced to three points in a Harris Interactive poll on Monday: 51.5% for Emmanuel Macron, 48.5% for Marine Le Pen.

“The last points that separate you from the 50% are the most difficult to win”, underlines political scientist Jean-Yves Camus, specialist in the far right.

After a giant rally on Saturday, Emmanuel Macron hit the road with a trip to Brittany.

The outgoing president referred to “other candidates” their “complacency vis-à-vis Vladimir Putin” and their “funding on the side of Russia”.

Mr. Macron was referring to Marine Le Pen received by the Russian president in 2017 and whose party continues to repay a loan of around nine million euros (12.2 million Canadian dollars) to a Russian creditor.

The president-candidate again defended his record and his vision of a strong France in “a strong Europe”, claiming to have “kept” the commitments made at the start of his five-year term.

Mr. Macron has been criticized by his opponents, being the only one of the 12 presidential candidates to decline the invitation to the program “Élysée 2022” Tuesday evening on the public channel France 2, officially for “reason of agenda”.

The death of a young Jewish man hit by a tram in the Paris region in mid-February, after being beaten by young people, also burst into the campaign this week, after candidates, including the two far-right candidates , pointed to a possible anti-Semitic act.

Emmanuel Macron asked for “complete clarity” on this affair, believing that it should not give rise to “political manipulation”.

Subsequently, the Bobigny prosecutor Eric Mathais affirmed that nothing at this stage supported the thesis of an attack “committed for discriminatory reasons”.