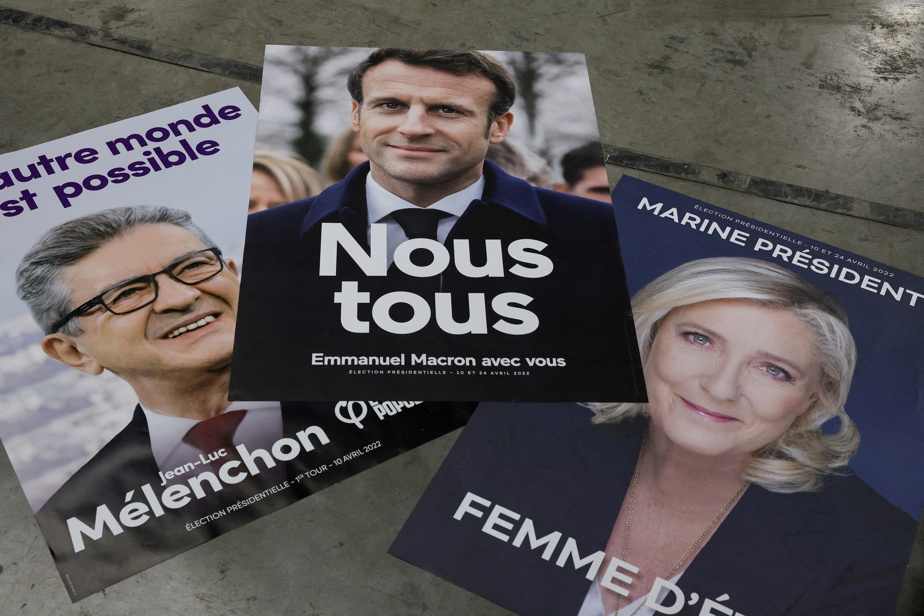 (Paris) The candidates threw their last forces into battle on Thursday three days before an uncertain first round, the gap narrowing more and more between the two presidential favorites, Emmanuel Macron and Marine Le Pen.

For the 12 contenders for the Élysée, two major challenges are in order before the official end of the campaign on Friday at midnight: mobilizing their supporters when abstention could approach or exceed the 2002 record (28.4%) and go look for the many undecided, who represent a third of those sure to vote.

Sunday’s election comes in a very tense international context, with the war in Ukraine and its repercussions, which have very concrete effects on the daily life of the French with a surge in energy and food prices. An election also against the backdrop of the COVID-19 pandemic.

Having entered the campaign late and after being very mobilized by the situation in Ukraine, the presidential candidate is still given as the favorite with around 26/27% of the voting intentions in the first round, and given as the winner in the second round by the polls, but day day by day, his lead is shrinking against far-right candidate Marine Le Pen (23/24%).

“We see the dynamics of Marine Le Pen, we will have to put the turbo at 2and tower, “recognized to AFP an adviser to the Macron campaign. “We have to stay mobilized until the last moment, it’s not won until the end”.

“Our objective is first of all to consolidate our lead, to prevent her (Marine Le Pen) from being in front in the first round”, added a member of the presidential majority.

“It’s not because Marine Le Pen has wrapped herself in a cloak of banality for a few months that she has changed in depth, she remains the representative of an extreme right in France, but above all she is someone who claims to be President of the Republic by proposing anything and everything, ”said Christophe Castaner, leader of the LREM deputies, on Sud Radio.

For her part, the far-right candidate, who has worked hard to smooth her image even if her project remains as “radical” on the migratory and institutional level, held her last rally in the largest stronghold of the RN, in Perpignan. .

The Catalan city is an example to follow: his former companion and vice-president of the party, Louis Aliot, is the only RN mayor to lead a city of more than 100,000 inhabitants having defeated a “republican front” organized by the mayor LR outgoing.

In full swing in the polls in recent days, around 23/24%, Mme Le Pen wants to mobilize a largely popular electorate, in the face of the threat of abstention, which could be particularly important in the lower classes.

“I urge you to go and vote,” said the RN candidate in front of some 4,000 supporters according to the organizers, who chanted “Marine president”, or “we are at home”.

“In the presidential election, we do not abstain, take back control! “because” no result is acquired until you have voted”, insisted Marine Le Pen.

Determined to invite himself to the second round, the rebellious candidate Jean-Luc Mélenchon, up around 16%, is also working hard. LFI multiplies public meetings, at least one in each department.

A notch below, around 6%, the ecologist Yannick Jadot on the move in Loire-Atlantique hopes that “the French will seize the election” after a “confiscated campaign”.

The “ecologist vote is always effective”, he hammered at a rally in Nantes, trying to dissuade left-wing voters from voting “useful” for Jean-Luc Mélenchon.

“Sunday, I call for a wake-up call, for general mobilization for the climate, for nature, for our children,” he said.

LR candidate Valérie Pécresse and her far-right rival Eric Zemmour (Reconquest!), both around 8/9% after starting from much higher, are fighting a fierce battle for a recomposition in their camp.

Traveling in the Rhône, Mme Pécresse called on the French to choose “neither immobility nor extremism”.

“The French want a right-wing program” but “Emmanuel Macron is not right-wing”, assured the candidate whose electorate is very courted by the president-candidate but also by the far right.

Valérie Pécresse will hold her last evening gathering in Lyon, and her rival Eric Zemmour at the Palais des Sports in Paris.

Around or below the fateful 5% bar, which determines the reimbursement of campaign expenses, the communist Fabien Roussel, who deplored that the campaign ended “under morphine”, will be at a meeting in Lille and, for the far left, Philippe Poutou (NPA) in Toulouse.

“We don’t let go”, launched Anne Hidalgo to activists during a visit to Rouen, given a historically low score (2%).