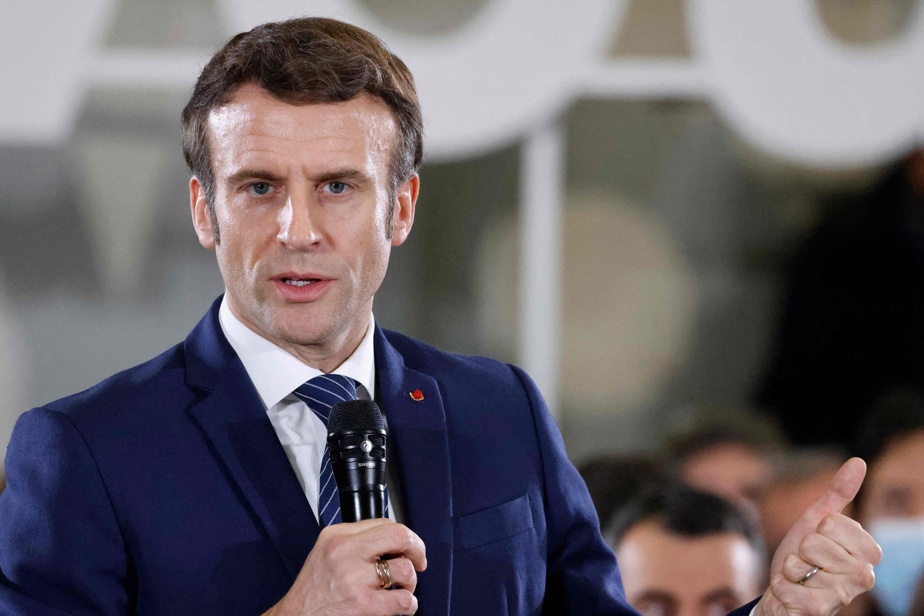 (Paris) The “at the same time” taken to its climax: Emmanuel Macron alternated on Monday between the presidential campaign, with a first trip of the candidate to the field, and intense diplomatic activity about the war in Ukraine.

“I will be president as much as I have to and I will be a candidate as much as I can”, he indicated at the start of the evening in Poissy (Yvelines), during a “conversation” with 200 inhabitants, in a context “which is very heavy” with the “return of the war in Europe”.

This expression often used by the outgoing president sums up this presidential campaign hit like never before for more than half a century by an international crisis, forcing the 12 candidates to move from very concrete proposals to the complexity of geopolitics.

Emmanuel Macron thus spoke in the afternoon with American President Joe Biden, after his Russian counterpart Vladimir Putin the day before, and before the Chinese Xi Jinping on Tuesday. The multiple diplomatic meetings will culminate Thursday and Friday in Versailles for a European summit.

In the evening, he declined, during a meeting with the air of great debate, his first candidate proposals, while he is given well ahead of the voting intentions of the first round, even exceeding the 30% mark in some surveys.

He has thus undertaken, if he is re-elected, to abolish the TV license fee and to triple the ceiling of the “Macron bonus” which so far allows companies to pay up to 1000 euros without charge or tax.

Before him, right-wing candidates Valérie Pécresse (LR) and far-right Marine Le Pen and Éric Zemmour had also announced their intention to abolish this fee.

“At the rate at which Emmanuel Macron is copying my program, he may soon be proposing the end of immigration! choked the former polemicist in a tweet.

Resuming his president’s hat – “because I can’t wait, we have to give visibility for the days to come” – Emmanuel Macron announced that government aid for gasoline would be “improved” around “the mileage allowance approach and inflation compensation”, while energy prices are soaring because of the war.

“It is more relevant than the measures to reduce long-term taxation because taxation on fuel is used to finance our energy transition”, he continued.

As in response to Marine Le Pen, her most serious rival according to the polls, who is in favor of a “permanent reduction in VAT from 20 to 5.5%”.

After this meeting and before “spinning off” to give “an urgent phone call on the international context”, the candidate president told an LCI journalist that he “would not debate with the other candidates before the first round. . No incumbent president who is standing for re-election has done so.”

“I do not shy away from the debate. Rather than having rallies where people applaud you because they are already convinced, I prefer the debate with the French, that’s what I owe them, ”he explained.

The possibility of a rally next Saturday in Marseille is no longer on the agenda.

Meanwhile, several of his rivals were struggling with their pro-Russian positions in the past.

The leader of LFI Jean-Luc Mélenchon, in a rally on Sunday in Lyon, for example said “stop the war, stop the invasion of Ukraine”.

This earned him the wrath on Monday of the environmental candidate Yannick Jadot who attacked the “indulgence” of Mr. Mélenchon and his “capitulation” vis-à-vis Vladimir Poutine, accusing him of “grandiloquence speeches” aimed at concealing its positions.

Socialist Anne Hidalgo and Mr. Jadot, who also called on Emmanuel Macron to “impose Russia’s withdrawal on Total”, particularly criticize Mr. Mélenchon’s opposition to the delivery of arms to the Ukrainians. The candidate of the Insoumis is at the head of the voting intentions on the left.

Éric Zemmour, who received support on Sunday from Marion Maréchal, the niece of Marine Le Pen, is also taken to task for his pro-Russian tropism.

In this race for the Élysée, there will finally be 12 candidates, one more than in 2017, the Constitutional Council having validated the sponsorship of the far-left candidate Philippe Poutou.

The right-wing candidate Valérie Pécresse won the gold medal for sponsorships (2,636 signatures). She overtakes the president-candidate (2098), Anne Hidalgo (1440) who, although struggling in the polls, takes third position.