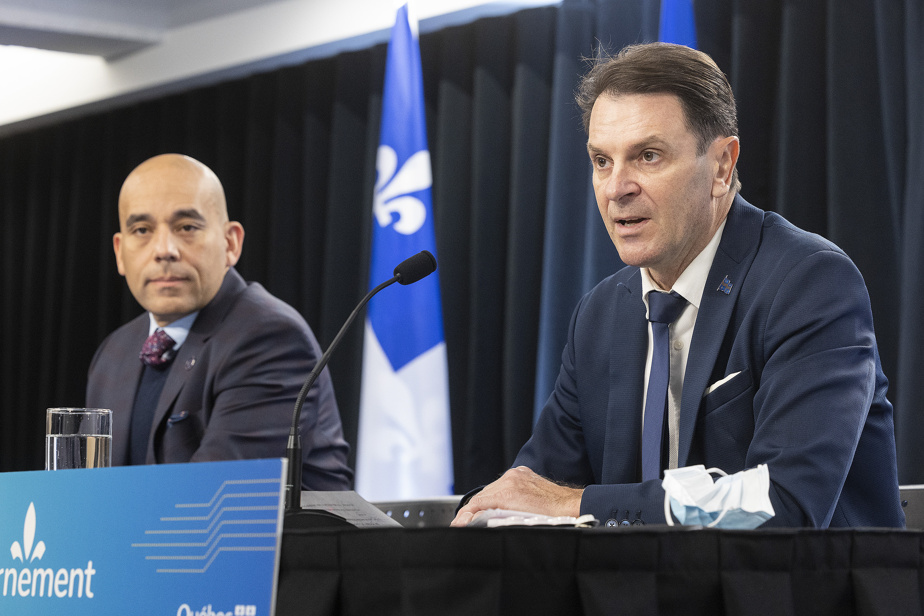 (Montreal and Quebec) Claiming to be “aware that the line is thin” between support for police work and the fight against racial profiling, the Legault government confirmed on Friday that it will appeal the judgment of the Superior Court ordering the end of the random interceptions. However, Quebec intends to present a new version of the bill tabled in the last term by the former Minister of Public Security, Geneviève Guilbault, who died on the order paper.

“We consider it unjustified to abolish such an important article for police forces. We believe there is a better way to use it. […] The status quo is unacceptable, ”explained the Minister of Public Security, François Bonnardel, at a press conference on Friday.

Accompanied by the Minister for the Fight against Racism, Christopher Skeete, Mr. Bonnardel revealed that he intends to reopen the Police Act in order to introduce new measures to combat profiling. Among them, Quebec intends to impose “continuing education” on police officers on discrimination and racial profiling, and “make more accessible” processes in police ethics for the population.

“We are also going to fund the police forces for experimenting with new innovative practices to fight against racial profiling,” said Minister Bonnardel, citing the example of the Immersion project, set up in recent years by the new chief. SPVM police officer, Fady Dagher, in Longueuil.

Overall, Quebec intends to “extend the minister’s power to establish guidelines on any subject relating to police activity and to make them public”. These guidelines “will focus on the absence of discrimination in police activities,” the government is assured.

Training specifically on the issue of racial and social profiling will also be developed at the National Police Academy, in addition to the 45 hours of training already offered on police interventions with marginalized communities. “We will not sit idly by,” promised Mr. Bonnardel. For the rest, “if people have been victims, have confidence in police ethics”, he said.

Minister Skeete promised the imminent launch of a “consultation tour” of actors concerned by racial profiling, including communities, organizations and police forces, in several regions of Quebec. “We will find better ways to do it,” he said.

“We realize there is a fine line between giving police tools to do their job and the scourge of racial profiling. Our government will draw the line. We want to find concrete solutions”, persisted the elected official, calling to “hear the cries from the heart of the communities, of which I am a part, who are tired of feeling excluded from our Quebec”.

A former customs officer by training before being elected provincial, the deputy for Sainte-Rose admits that he still has fears when he crosses borders because of the color of his skin. “I understand them,” he said, speaking directly to members of racialized communities.

But according to him, “we must distinguish between a police tool and the deep desire to abolish the scourge of racial profiling”. “We can keep and maintain an essential tool for the protection of Quebecers and, at the same time, fight against profiling,” he insisted.

In his decision handed down on October 25, Judge Michel Yergeau argued that the rule of law authorizing traffic stops without a real reason violates the rights of citizens under the Canadian Charter of Rights and Freedoms. “Racial profiling does exist. It is not a laboratory-constructed abstraction. It is not a view of the mind. It manifests itself in particular with black drivers of motor vehicles”, he had hammered, judging that the random arrest serves for certain police officers as “safe conduct for racial profiling against the black community”.

On Friday, Mr. Bonnardel spoke instead of “possible situations of racial profiling”. The day after the Court’s decision, Prime Minister François Legault argued that random arrests can be explained in certain contexts, particularly in the fight against armed violence. “We have to let the police do their job,” he said.

There is no law as such that allows a police officer to intercept a person without reason. This power essentially stems from two Supreme Court decisions handed down some 30 years ago. The highest court in the country then concluded in the Ladouceur case – split 5 to 4 – that random stops could be justified under the Charter given the number of road accidents caused by impaired faculties.

A project that died on the soap opera

In December 2021, Geneviève Guilbault, then Minister of Public Security, tabled a bill on the police aimed, among other things, at Quebec establishing “guidelines [pouvant] in particular on the absence of discrimination in police activities”. However, this legislative text has never been studied by the National Assembly. He therefore died on the soap opera.

This provision of the bill was intended as a response to a recommendation by the Anti-Racism Action Group that Prime Minister François Legault created in June 2020 in the wake of the death of American George Floyd. In its report tabled in December 2020, the action group, made up of three ministers and four Caquiste deputies, asked to “put an end to cases of police discrimination”. One of the action group members was Christopher Skeete.

“Despite all the efforts undertaken, the issues of racial profiling during police arrests and police violence linked to racism still seem to be present and continue to arouse many reactions in the circles that are victims of it”, can we read in the report. He added that it is necessary “to make the prohibition of random police arrests mandatory”.

“For an arrest to take place, there must be a clear reason on the part of the police. This practice does not have the force of law, it also read. The Action Group recommends that it be made mandatory, by integrating it into the police code of ethics. It will thus be possible to sanction in ethics or discipline a police officer who does not respect it. This measure will significantly reduce racial profiling, if not eliminate it. »

At that time, the group’s co-chairman, Minister Lionel Carmant, gave a personal testimony. “When I was younger, I experienced racism. I was stopped a few times randomly because I was driving my parents’ car. I always said to myself afterwards that I didn’t want my children and my grandchildren to have to go through this in their lives. »