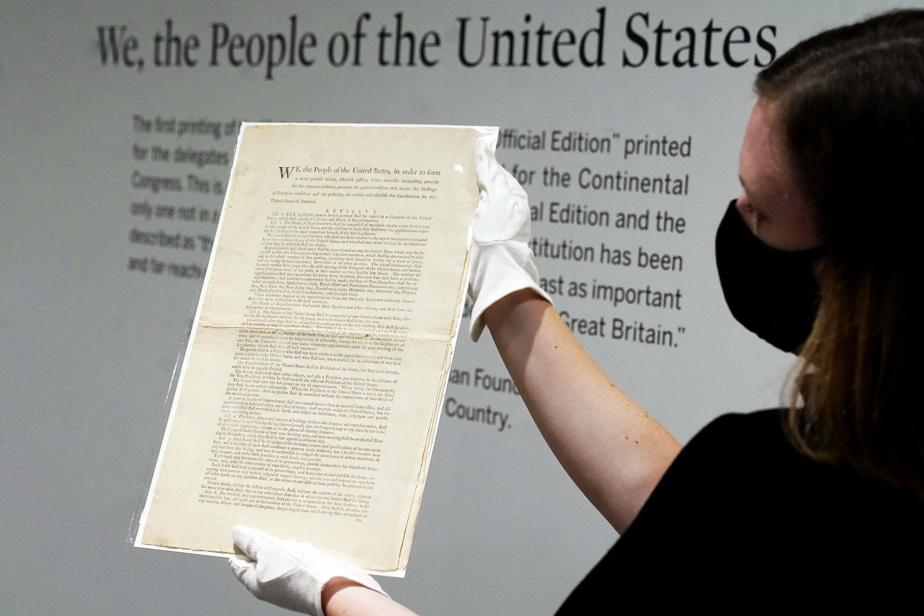 (New York) An extremely rare original copy of the US Constitution of 1787 was auctioned Thursday night in New York for $ 43 million, but cryptocurrency enthusiasts who coveted this exceptional document failed at $ 40 million.

The house Sotheby’s, which organized this unprecedented sale, announced that this amount constituted a “world record for a historical document offered at auction”.

A spokesperson said that this foundational piece of political history in the United States of America was sold for exactly “$ 43.2 million”, commissions included.

Only “13 known copies” of the first printing of the Constitution of the United States, signed September 17, 1787 in Philadelphia, remain, according to Sotheby’s, although 500 had probably been printed at the time.

The original copy sold Thursday evening – one of only two still belonging to an individual, in this case the American collector Dorothy Tapper Goldman – was estimated last September between 15 and 20 million dollars.

It left for more than double in just eight minutes with auctions taken in the room in New York, but also on the phone from all over the world in this atmosphere so particular to trading rooms.

Sotheby’s did not release the name of the buyer, but the prestigious house said a group of cryptocurrency enthusiasts had lost their bet.

In fact, the group called ConstitutionDAO (DAO for “decentralized autonomous organization”) admitted on Twitter that despite their efforts, they had “not won the auction for the copy of the Constitution of the United States.”

In recent days, the group had organized a flash fundraiser reaching $ 40 million on the ethereum cryptocurrency network (second largest cryptocurrency after bitcoin) so that “We the people, for the people, we buy the Constitution at Sotheby’s ”.

“However, it is a historic evening. This is the largest fundraising by crowdfunding in crypto for a physical object, ”said ConstitutionDAO.

Sotheby’s had specified in advance that the copy of the Constitution could not be purchased directly in cryptocurrency, but that the sum would have to be converted into conventional currency.

This text signed by the “Founding Fathers” of the United States of America, including George Washington, Benjamin Franklin and James Madison, was part of a private collection of American constitutional documents dating from the revolutionary period from 1776 to 1789.

Selby Kiffer, a historian expert in manuscripts and ancient books at Sotheby’s, hailed in a press release “the monumental and historic opportunity for the sale of this exceptionally rare print”, probably off the press on the evening of September 16, 1787.

This famous constitutional text, which begins with the famous formula “We, the people of the United States, with a view to forming a more perfect union, […] we decree and establish this Constitution for the United States of America ”, was then ratified by the Federated States between December 1787 (beginning with Delaware) and May 1790 (Rhode Island).

Sotheby’s chose to exhibit this collection last September for the 234e anniversary of the Constitution, but also in a hyperpolarized political climate in the United States, between supporters of former President Donald Trump and the slim Democratic majority of President Joe Biden.

At the time, Mr. Kiffer told AFP “find it very interesting” that the Constitution is still “as much debated today as it was when it was ratified” more than 230 years ago.