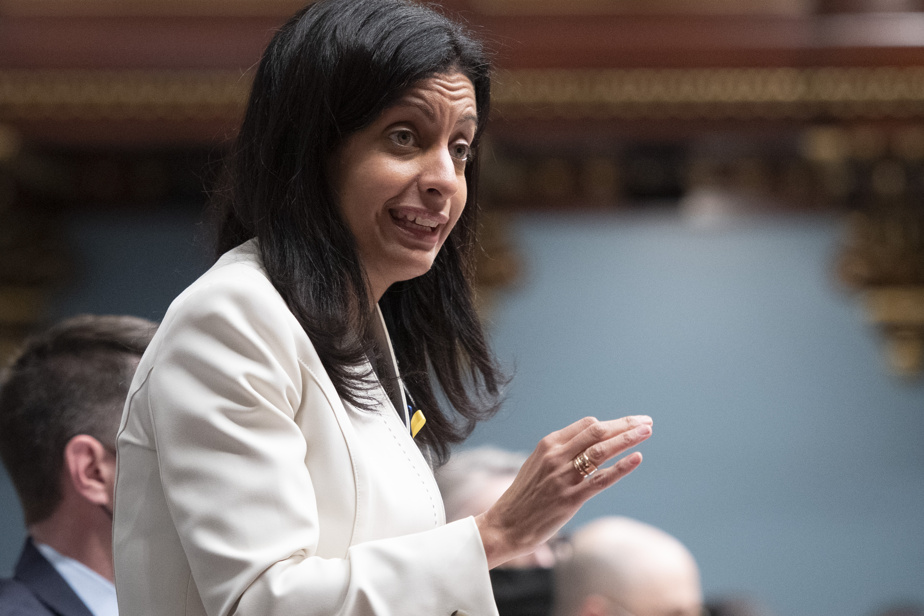 (Quebec) Dominique Anglade backs down on a controversial amendment passed by his party to the reform of Bill 101 and which is causing a stir within his caucus. This blunder motivates an English-speaking militant group more than ever to found a political party.

In a scrum on Tuesday, the leader of the Liberal Party asked Quebec City to withdraw a subamendment presented by her French protection critic, Hélène David, which would have the effect of imposing on all students of English-speaking CEGEPs , including rights holders, to take courses taught in French to obtain their diploma. The issue has since been hotly debated in the Liberal caucus, where some MPs have expressed their displeasure.

Bill 96, which amends the Charter of the French language, is at the detailed study stage in a parliamentary committee. A few weeks ago, while elected officials were studying the articles concerning CEGEPs, Liberal MNA Hélène David proposed modifying an amendment tabled by Minister Simon Jolin-Barrette so that “all students who attend an English-speaking CEGEP, they are francophones, allophones or rights holders, that is to say, having studied mainly in English in elementary school [et au] secondary, [suivent] at least three courses in French, and not French”, as part of their college studies.

In the amendment originally proposed by the government, English-speaking students (known as “rights holders”) were excluded from this measure. Liberal MP David Birnbaum welcomed the subamendment proposed by his colleague Hélène David.

“We are talking about institutions that are funded by taxpayers, by the state. We are talking about students who choose to continue their studies here in Quebec. That they have this obligation, which would in most cases be added to their secondary studies, where they would have had to succeed [des cours] in French, the second language, is completely dignified and normal,” he said.

It’s up to the government to correct the error

In a press scrum on Tuesday, Liberal leader Dominique Anglade said she now realizes “how much [cette mesure] does not apply”. She then admitted that her party had not consulted the Anglophone groups before proposing this subamendment. If the situation is not corrected, students could experience failures, she warned.

“The ball is in the CAQ’s court,” she said, asking the government to correct the situation. In a scrum on Tuesday, Prime Minister François Legault recalled that the Liberal amendment had been supported by all parties. He then stressed that he was looking at “the situation with the other parties” before responding to Ms.me England.

“This reversal is above all an illustration of the political disorientation of the Quebec Liberal Party. There was the nationalist turn, the progressive turn, the green turn. All these are fine slogans, but I have some news for Dominique Anglade, no poll in life replaces convictions, ”said the parliamentary leader of Québec solidaire, Gabriel Nadeau-Dubois.

“This reversal on French courses for Anglophones is just an illustration of the fact that it is a party that is completely confused politically,” he added.

The Parti Québécois and Québec solidaire, which supported the subamendment proposed by the Liberals, do not intend to support the Liberal Party in its request to the government. The minister responsible for the French language, Simon Jolin-Barrette, did not comment on the subject. When the subamendment was adopted, however, he welcomed the Liberal initiative.

The PLQ “in free fall”

Colin Standish, a jurist in a law firm in Sherbrooke and an activist with the Exploratory Policy Options Committee, believes that the “incoherent” policies proposed by the Liberals give ammunition to those who believe that a new party defending the rights of minorities and Anglophones must be founded in Quebec.

According to Mr. Standish, “the Liberal Party is in free fall”, he said, adding that the official opposition “is going in circles”.

“Our thinking is moving in the right direction,” he then added regarding the creation of a party that would compete with the Liberals in the next election campaign. A decision would be announced in the coming weeks.