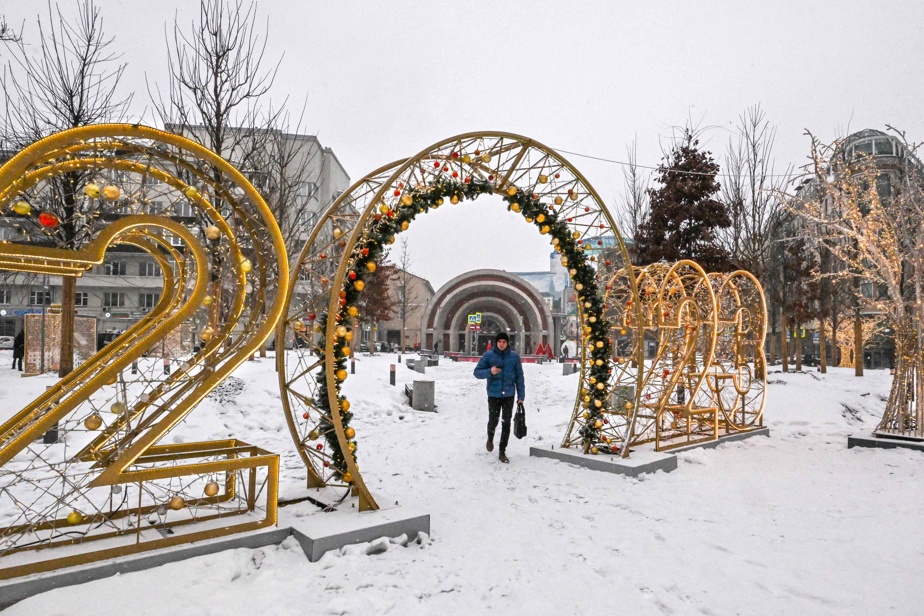 (Moscow) In Russia, the transition to the new year, which announces the beginning of the winter holidays, usually gives rise to celebrations that are as joyful as they are spectacular. But as 2022 comes to an end, marked by an offensive against Ukraine with deaths, military setbacks and economic difficulties, few Russians have the spirit to celebrate.

Rather than spend money on grandiose festivities, Nadezhda Arkhipova, a resident of Moscow, calls for equipping the reservists mobilized in the fall, some of whom were sent to the front without the required equipment.

“Above all, our soldiers must not lack quality equipment,” Ms.me Arkhipova, 40 years old.

A sign that this state of mind is widely shared, the city of Moscow canceled its December 31 fireworks display, after an online vote in which a majority of residents voted against large-scale celebrations.

If illuminations try to brighten up the snowy streets of the capital, portraits of soldiers deployed in Ukraine rub shoulders with electric garlands, bringing the Russians back to reality.

On the iconic Red Square, Christmas stalls selling hot drinks and sweets have been set up as usual around an ice rink. But President Vladimir Putin canceled his usual year-end hockey game.

The Russian leader also chose not to hold his annual year-end press conference. His New Year’s greetings should nevertheless be broadcast on December 31 at midnight.

As the conflict in Ukraine drags on, Irina Chapovalova, a 51-year-old childcare worker, hopes for only one thing: “Peace above our heads.” “A lot of people are suffering,” she adds modestly.

How to celebrate the New Year has posed a dilemma for authorities, with some officials wanting to hold celebrations as if to maintain some semblance of normalcy, others seeing it as an inappropriate luxury amid the conflict.

While Moscow Mayor Sergei Sobyanin called off major protests, he nonetheless called on Muscovites to celebrate the New Year, pointing out that the city held celebrations even during World War II.

Vladimir Azarotchkin, from Siberia, walks with his girlfriend in Gorky Park in the center of the capital and says the illuminations lift his spirits. “I hope that all the difficult times will remain in the past and that a new chapter will begin for all of us,” said the 22-year-old student.

This year, the decorations also adopt the symbols of the offensive in Ukraine, such as the letter “Z”, plastered to buildings or suspended along the roads.

But this politicization of the decorations is not unanimous: in Saint Petersburg (north-west), the authorities had to remove an installation glorifying the conquest of Mariupol, a port in south-east Ukraine, after it was vandalized.

The public broadcasting group VGTRK promised viewers that they would be entitled to “a New Year’s atmosphere, despite the changes in (the) country and in the world”.

But this year, the flagship New Year’s Eve program, Golouboi Ogoniok (“Blue Light”), broadcast since the 1960s under the USSR, indicated that it would invite “heroes from Russia, back from the front”.

Some emblematic figures of the end-of-year shows will however be noticed by their absence, such as Maxime Galkine, an actor and presenter who left the country after condemning the attack in Ukraine. Or his wife, the very famous singer Alla Pougatcheva who also denounced the conflict.

Ten years ago, for the transition to the year 2013, the state channel Pervy Kanal invited a young Ukrainian actor to co-present its show. A certain Volodymyr Zelensky, now President of Ukraine. Another era.