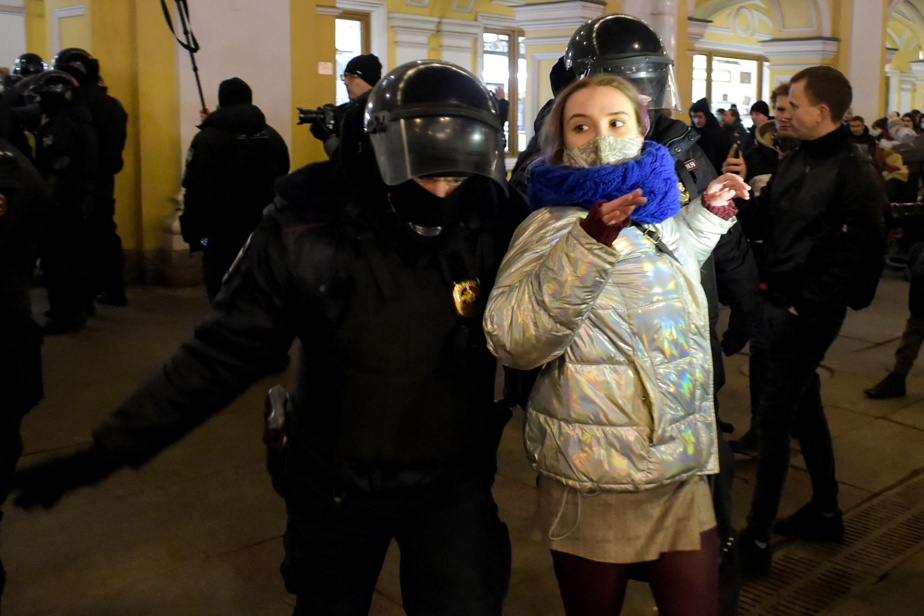 (Moscow) Dozens of people were arrested on Wednesday evening during rallies against the invasion of Ukraine organized in Moscow and Saint Petersburg at the call of imprisoned Russian opponent Alexei Navalny, journalists from the AFP.

In the Russian capital, at least seven people were arrested near Place du Manège, a stone’s throw from the Kremlin, where an anti-war demonstration had been announced for 11 a.m. (EST). Large police forces were deployed to the scene well in advance, and metal barriers were installed to prevent any entry into the square.

“No to war! “, shouted a woman in a red down jacket, before being taken away by the police, according to an AFP journalist.

“It pained me to see what is happening (in Ukraine, editor’s note) and to do nothing,” a 51-year-old man told AFP, before being arrested with his son. 17 year old who said he took to the streets “for peace”.

In Saint Petersburg (north-west), a hundred people came to demonstrate against the war in a square in the city center, and dozens of them were arrested.

“I couldn’t stay at home, because we have to stop this war,” Anton Kislov, a 21-year-old student, told AFP.

Imprisoned Russian opponent Alexei Navalny on Wednesday encouraged his compatriots as well as Belarusians to brave the intimidation of the authorities and demonstrate every day against the invasion of Ukraine.

He thus called on all Russians to meet every weekday at 7 p.m. local time in the main square of their city, as well as on weekends at 2 p.m.

“I call on everyone to go out on the streets and fight for peace,” Navalny said in a message made public on social media.

Imprisoned since January 2021, on his return to Russia after a serious poisoning which almost cost him his life and of which he accuses the Kremlin, Alexeï Navalny is serving a prison sentence of two and a half years for a case of fraud which he denounces as politically motivated.