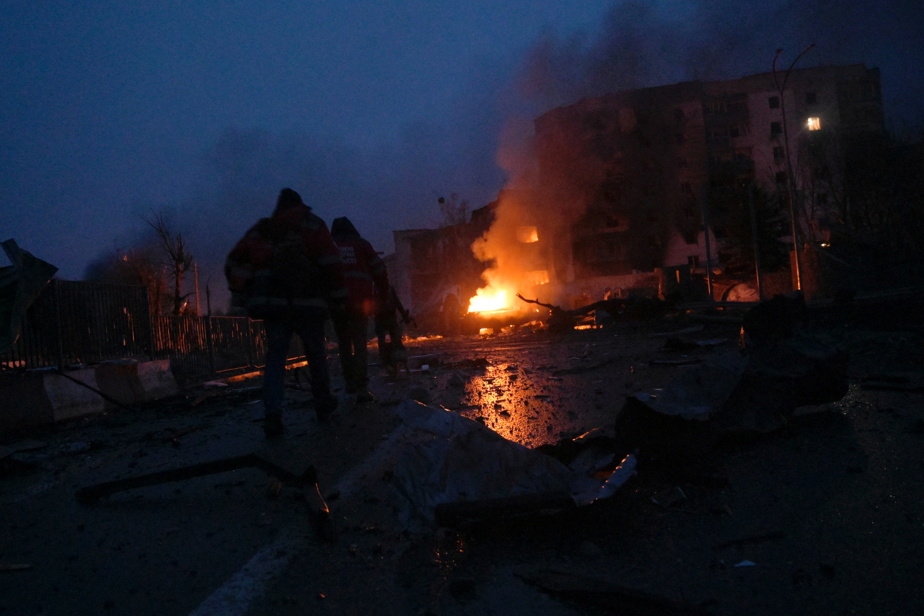 The Russian army continued Wednesday to relentlessly pound several major cities in Ukraine, responding with a new wave of deadly attacks to a resolution of the General Assembly of the United Nations. It condemned “in the harshest terms” the offensive launched last week by President Vladimir Putin.

The resolution in question, which also demands the “immediate” and “unconditional” departure of Russian troops, was supported by a very large majority of member states, ie 141 out of the 193 in the organization. Apart from Russia, only four countries among the most repressive on the planet, namely Belarus, North Korea, Eritrea and Syria, voted against, testifying to Moscow’s relative isolation on the international scene.

Before the vote, the Ukrainian ambassador Serhiy Kyslytsya drew a parallel between the actions of the Russian president and those of Adolf Hitler, noting that the master of the Kremlin wanted to deprive his country of the “even right to exist”.

His Russian counterpart, Vassili Nebenzia, retorted that the current “special military operation” was aimed at “pacifying” Ukraine and that the non-binding UN resolution would prolong the fighting by encouraging “Kyiv radicals” to cling to power.

Moscow, using its right of veto, had blocked a similar text last week at the Security Council, again dismissing without flinching the multiple condemnations of the offensive.

“You are on the right side of history”

The verdict of the member countries of the United Nations was welcomed by Ukrainian President Volodymyr Zelensky.

“You are on the right side of history”, assured the Head of State, who gave his approval to the holding on Thursday of a second session of talks with Russia where the possibility of a ceasefire must in particular be discussed. -fire.

A first meeting taking place on Monday at the border with Belarus ended without result after the Russian camp reiterated its objective of “demilitarizing” Ukraine and demanding a change of government in Kyiv.

Alongside these developments, the leaders of several major Ukrainian cities sounded the alarm on Wednesday about the intensification of strikes and the growing number of civilian casualties.

Vadym Bouchenko, mayor of Mariupol, said artillery fire had been launched continuously for more than ten hours on Wednesday, making it impossible to come out to help the injured.

The city of Kharkiv, in the northeast, was also hit hard, but remained under the control of the Ukrainian authorities. In Kyiv, also pounded, a loud explosion occurred near the Central Station, crowded with residents seeking to flee to the west of the country.

According to the UN, Russian attacks have claimed 227 civilian lives and injured more than 500 since the start of the conflict, with the actual toll likely being “significantly higher”.

The offensive has forced several hospitals to move their patients to the basement or to bunkers and risks causing a major humanitarian crisis, the World Health Organization warned on Wednesday, which is alarmed by the fact that establishments are beginning to run out of basic equipment.

The evolution of the military situation makes several analysts fear that the Russian army seeks to besiege the cities it covets by multiplying artillery and rocket fire without taking into account their potential impact on the population, as it l had done in particular in Syria.

Lawrence Freedman, a military analyst attached to King’s College London, pointed out in an analysis published on Wednesday that the Russian army had sinned with arrogance last week in thinking that it could take important cities “by speed and surprise” with a fraction of the available troops.

It has since changed its strategy to focus on casualty-minimizing strikes, but risks being forced to launch perilous urban offensives if it really wants to win.

A prolonged siege can be a way to bend the population, but it risks taking too long for Vladimir Putin, who needs, judges Mr. Freedman, to “finish this war as soon as possible”.

The extent of the sanctions imposed by Western countries is undermining the Russian economy and will hit the country’s population hard, which risks, according to the analyst, multiplying the protests by taking the measure of the fall in its purchasing power and the cost, human and material, of war.

The Russian regime has already arrested thousands of people demanding an end to hostilities, including children and the elderly, and may be tempted to further toughen its approach to minimize the risks of destabilization, a Russian analyst wrote on Twitter on Wednesday. , Tatiana Stanovaya.

In the Western countries supporting Kyiv, conjectures are rife about the state of mind of the Russian head of state, who has multiplied warnings against them for a week, going so far as to brandish the nuclear threat on Sunday.

The United States, which sees in this exit the “peak of irresponsibility”, has decided to postpone ballistic missile tests scheduled for this week to ensure that it does not fuel tensions and risk a skid.

The American Secretary of State, Antony Blinken, must also go to Poland on Thursday before meeting the leaders of the Baltic countries and Moldova, who fear being victims after Ukraine of the expansionist aims of Vladimir Putin.