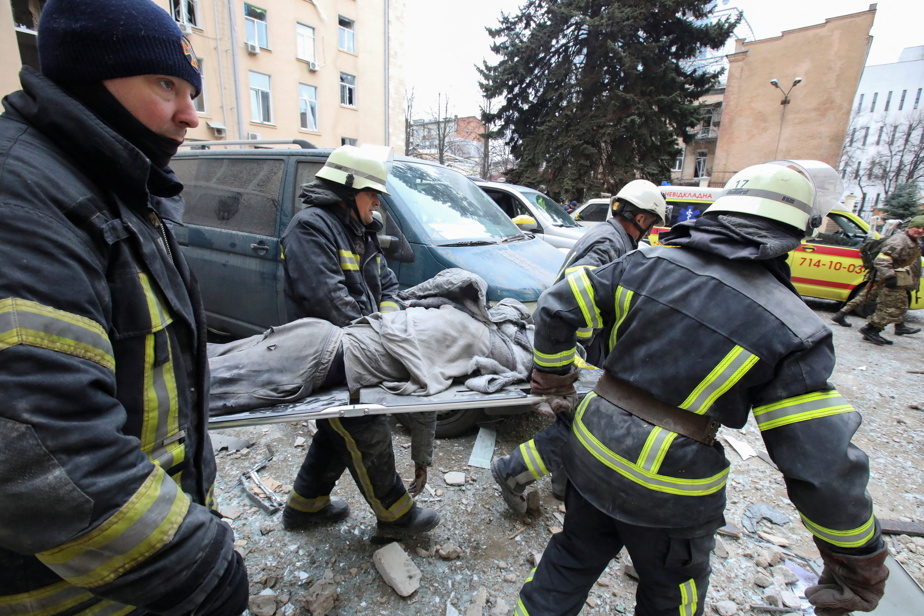 (Kiev) Russia further intensified its offensive in Ukraine on Tuesday, targeting cities including Kiev and Kharkiv where the bombings have claimed many civilian victims, pushing the Europeans, urged to act by the Ukrainian president, to further toughen their sanctions against the Russia.

On the sixth day of the Russian invasion of Ukraine, deadly strikes followed one another on Kharkiv, the country’s second city, which Russian forces are storming.

A strike hit the central square of this city of 1.4 million inhabitants, close to the Russian border, hitting the headquarters of the regional administration, Governor Oleg Sinegoubov said, in a video on Telegram showing the explosion .

In Kiev, the capital around which Russian forces are massed, a strike hit the television tower in the afternoon, interrupting the broadcast, said the Interior Ministry.

President Volodymyr Zelensky denounced “a war crime” in Kharkiv, and stressed that the defense of Kiev was “the priority”.

The likelihood of a major assault on the capital, normally strong at nearly 3 million people, seemed to be increasing by the hour.

Satellite photos released overnight from Monday to Tuesday by the American satellite imagery company Maxar showed a Russian convoy stretching for tens of kilometers and heading towards the Ukrainian capital from the northwest.

In the early afternoon of Tuesday, the Russian army called on Kiev civilians living near Ukrainian security services infrastructure to evacuate, saying it wanted to strike to stop “computer attacks against Russia”.

Witness to the Russian advance, the forces of the Ukrainian army, lines of trucks and tanks, were concentrated to the west and north of the capital, noted AFP.

In the city center, where snow had fallen during the night, the basic necessities stores still open were always full. Residents who did not flee have erected barricades and dug trenches in recent days.

The Russians also seemed to have advanced in the south of the country, on the Sea of ​​Azov, where several major Ukrainian metropolises are located.

In the port of Mariupol, the Russian forces “strike all the districts of the city”, indicated the governor, speaking of 21 injured and dead in unspecified number.

The Russian Defense Ministry claimed that its troops advancing along the coast from Crimea managed to join those coming from the pro-Russian separatist territory of Donetsk, giving strategic territorial continuity to Russian forces.

The information was not immediately verifiable. Shortly before, the Ukrainian army had claimed to have thwarted this attempt.

The Russian army also controlled the entrances to the coastal city of Kherson (290,000 inhabitants), further west, according to its mayor, Igor Kolikhaïev. Videos from locals on social media show Russian soldiers in the locality.

Russian Defense Minister Sergei Shoigu seemed to confirm these multiple offensives, stressing that “the special military operation” – an expression used by Moscow to designate the invasion – would continue “until the set objectives are achieved”.

Faced with this development, President Zelensky, who is now calling for his country’s “immediate” integration into the EU through a special procedure, asked the Europeans to “prove that they are with Ukraine” during an intervention by videoconference in the European Parliament, which gave him a standing ovation.

If a rapid admission of Ukraine into the EU seems difficult, the Europeans indicated on Monday evening, after a new exchange with US President Joe Biden, that they were ready to further toughen the sanctions against Russia, already from historic magnitude.

“We are going to cause the collapse of the Russian economy,” French Economy Minister Bruno Le Maire, whose country holds the presidency of the European Union, said earlier.

The Western camp is trying to deprive Russia of all its international funding and to freeze the assets of Vladimir Putin and his entourage.

With the planned exclusion of major Russian banks from Swift and sanctions against the Russian Central Bank, the retaliatory measures are already having “a massive impact on Russia” and “Putin’s war chest is seriously dented”, estimated Tuesday. German Finance Minister Christian Lindner, after a meeting with his G7 counterparts.

After a series of measures to support the economy and the ruble, which fell to historic lows, the Russian government was preparing a new decree on Tuesday to stem the flight of foreign investors. The Moscow Stock Exchange remained closed.

World markets – especially European – are also suffering the blow. Oil prices continued to rise in particular, before Wednesday’s meeting of the Organization of the Petroleum Exporting Countries (OPEC) and its allies.

In addition to economic sanctions, Russia is now excluded from a multitude of cultural and sporting events, including the 2022 World Cup in Qatar.

British Prime Minister Boris Johnson has denounced the “absolutely sickening” bombardment of Kharkiv, comparing it to deadly strikes that targeted Sarajevo in the 1990s.

In Geneva, US Secretary of State Antony Blinken stressed that “violations of international humanitarian law committed by Moscow are increasing hour by hour”, and also suggested an exclusion of Russia from the Human Rights Council of the UN.

Even China, which has so far not condemned the Russian invasion, expressed “deep regret” over the conflict on Tuesday, during a meeting between its foreign minister and his Ukrainian counterpart.

But despite this unprecedented pressure, to which must be added demonstrations of solidarity with Ukraine in many countries, Vladimir Putin seemed determined to continue the offensive and put an end to aspirations of membership of the EU and the Atlantic alliance of this former Soviet republic.

During an exchange on Monday with French President Emmanuel Macron, he laid down as conditions, to stop the invasion, the recognition of Crimea as Russian territory, the demilitarization and the “denazification” of Ukraine. The Russian president has previously called Ukraine’s leaders “neo-Nazis”.

He reiterated his demands as the first Russian-Ukrainian talks were held. Talks that lasted a few hours, before ending on the only commitment that they would resume “soon”.

Since the beginning of the Russian invasion on February 24, the conflict has displaced a million people in Ukraine itself, and pushed more than 660,000 Ukrainians to neighboring countries – mainly Poland, but also Hungary, Slovakia and Romania. , according to the UN High Commissioner for Refugees.

Long lines of cars continued to head towards the Polish border, from the big city in western Ukraine, Lviv, which had become a gateway and center of retreat for Ukrainians as well as for Western embassies.

Women refugees in Lviv, leaving the men of their family “to defend Ukraine”, mobilized to support them, by donating their blood or by making camouflage nets.

The outcome of the conflict remains uncertain. The UN on Monday cited 102 civilians killed and 304 injured, adding that the actual figures were “significantly” higher.

Ukraine on Monday reported 352 civilians killed and 2,040 injured since Thursday and said thousands of Russian soldiers had perished.

The Russian forces have acknowledged losses, but without quantifying them.