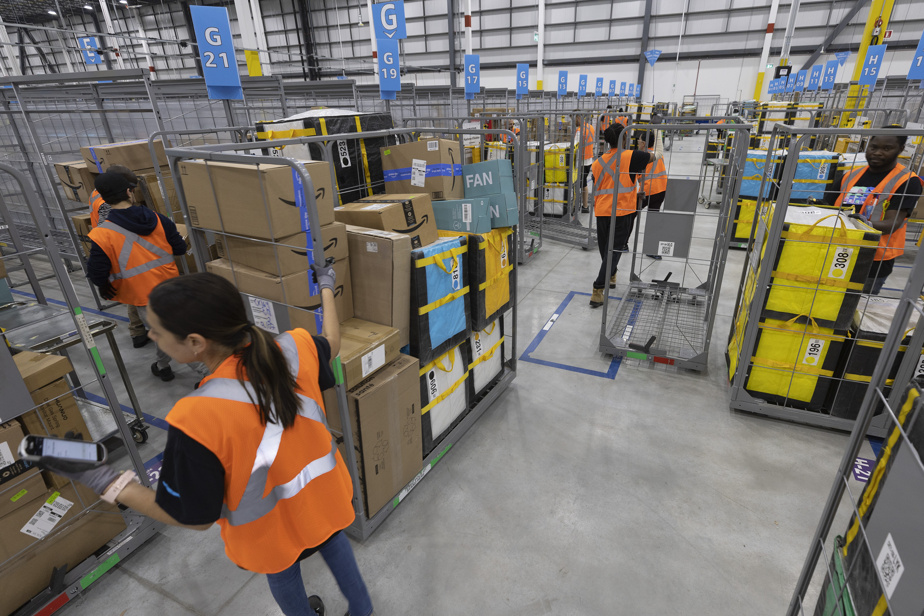 Former Amazon.com workers and union organizers visited some of the e-commerce giant’s Quebec sites on Friday as part of a global movement urging the company to stop “pinning down” workers, communities and the planet.

Mostafa Henaway, a former Amazon worker and Immigrant Worker Center union activist, said he and others would approach workers at YUL2 and DXT6 facilities in Lachine to remind them of their rights and encourage their employer to do better. .

“We are here today, along with other Amazon associates around the world, to say enough is enough,” said Henaway, who worked at the DXT4 delivery center in Laval.

“At what cost do we have fast and free delivery? »

The visit, timed for Black Friday — one of the busiest times for the Seattle-based company — aims to push Amazon to pay fair wages and taxes and be more mindful of its impact on the environment.

It’s part of the movement Make Amazon Paywhich will see Amazon workers and workers’ rights groups in at least 30 countries, including the US and England, strike or rally in support of fair wages and action against change climatic.

Workers in these countries denounce an alleged drop in wages, while Amazon reaps record revenues. The company pays no income tax in Europe and has seen its CO emissions2 increase by 18% last year.

For workers and consumers, all prices go up. And for everyone, the temperature is globally getting higher and our planet is under pressure. But rather than supporting its employees, communities and the planet, Amazon squeezes them to the last drop.

Excerpt from a text on the website of Make Amazon Pay

In response, Amazon spokeswoman Kristin Gable pointed out that the company is investing significantly in all areas the protesters criticize.

The company has pledged to be carbon neutral by 2040 and offers “competitive salaries and excellent benefits” while “inventing” ways to keep staff healthy and safe, she said. added.

Although we are not perfect in any area, if we look objectively at what Amazon is doing on these important issues, we see that we take our role and our impact very seriously.

Mr Henaway, who wrote an expose about the month he worked for the company in 2021, disagrees.

He said new hires were bombarded with perks and said it was meant to make them feel like the company was making history, but they were slowly becoming “burnt out” from Amazon’s demands.

“It’s expensive to do the same job, minute after minute, second after second,” he said.

“There’s this constant rush to complete tasks in a given time, and you’re constantly monitored. »

The pressure is even greater on Black Friday, which he describes as one of the busiest days at Amazon, except for the December holiday season.

“Amazon creates a system where you’re told you’re special, you’re part of the family, and at the end of the day you’re kind of kicked out if you don’t meet certain quotas,” he said. affirmed.

Several have complained about Amazon’s labor practices in the past.

In 2019, Local 175 of the United Food and Commercial Workers in Canada (UFCW Canada) accused an Amazon fulfillment subsidiary of engaging in unfair labor practices by encouraging subcontractors. contractors not to support unions. Contractors who had workers willing to unionize saw their contracts drastically reduced, resulting in layoffs, closures and bankruptcies.

A U.S. judge on Monday ordered the company to stop retaliating against employees engaged in workplace activism, after the National Labor Relations Board sued Amazon to force it to reinstate a New York warehouse worker who had been laid off for his union activities.