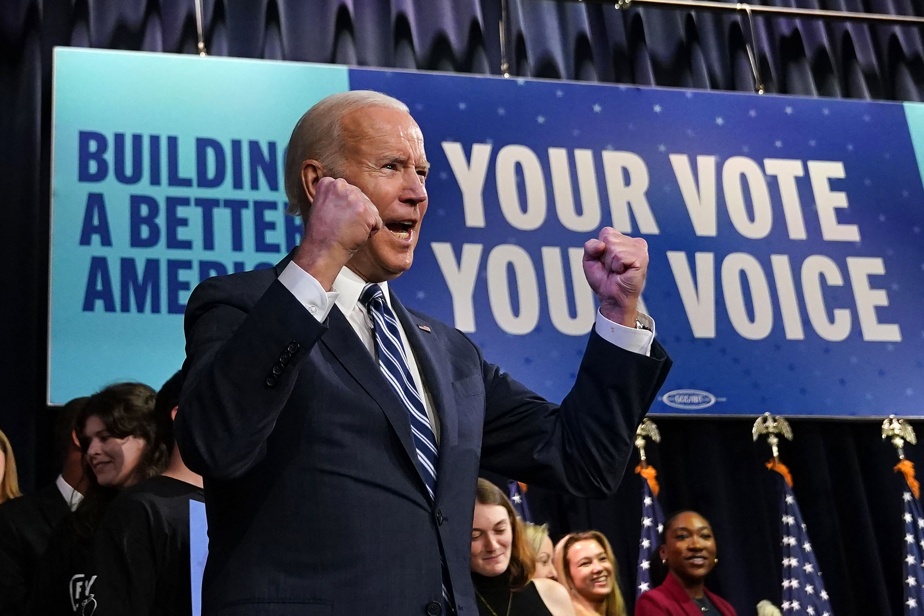 (Washington) The Democrats rejoiced Sunday to have kept control of the United States Senate, a verdict which opened the hour of accounts among their Republican rivals.

“It’s such a cause for celebration”, launched, all smiles, Nancy Pelosi the leader of the Democrats in the House of Representatives, whose party has just snatched the seat it lacked to keep the upper house of Congress.

“Who would have thought two months ago that this red wave would become a very small droplet, and again…”, she quipped on CNN, in reference to the color of the Republican Party.

Banking on inflation and the unpopularity of President Joe Biden, the tenors of the opposition had predicted with great confidence such a wave, even a “tsunami”, during the mid-term elections organized on Tuesday.

Former President Donald Trump, omnipresent in the campaign, even intended to surf the Republican wave to announce a new candidacy for the White House.

He’s still planning a “big announcement” this Tuesday, but his mood has changed.

“Fuck in the Air”

On Sunday, he very aggressively blamed the rout on Mitch McConnell, the leader of the Republican group in the Senate, who was a strong ally during his tenure but has distanced himself since the assault on the Capitol.

“He screwed up the election and everyone despises him,” he belched on his Truth Social network, criticizing Mitch McConnell for not investing enough money in the Blake Masters campaign. , a candidate he supported in Arizona.

The defeat of the latter, like that of another of his foals in Nevada, allows the Democrats to keep 50 seats out of 100 in the Senate, and therefore the upper hand since Vice President Kamala Harris has, under the Constitution , the power to decide between elected officials.

This epilogue brightens the horizon for President Joe Biden.

“I feel good and I look forward to the next two years,” he commented from Phnom Penh, Cambodia, where he met with Asian leaders before flying to a G20 summit in Bali.

The Democrats even begin to dream of keeping their majority in the House of Representatives.

“We still think we have a chance of winning,” said Nancy Pelosi, while the results in about twenty constituencies are still awaited.

According to CNN and ABC, the Republicans currently have 211 of the 218 seats needed for a majority, and the Democrats 204 to 206.

Among the Republicans, Donald Trump is not the only one who wants to settle his accounts.

“The old party is dead, it’s time to bury it,” tweeted Senator Josh Hawley, a figure on the party’s right wing, calling for “Building something new.”

The day before, other relatives of Donald Trump had seemed to want to challenge the leaders of the party in Congress, whose positions will be put into play soon.

Among the moderates, the governor of Maryland Larry Hogan, presented as a possible rival of Donald Trump before the presidential election of 2024, attributes this fiasco to the Republican billionaire.

“This is the third election in a row that Donald Trump has made us lose,” he said on CNN on Sunday. “I’m tired of losing,” he said, taking up a little music that has been gaining strength in the past few days in the conservative media.

The 76-year-old real estate magnate, however, retains undeniable popularity in part of the Republican electorate and the polls have so far always given him the winner of a Republican primary.

Florida Governor Ron DeSantis, triumphantly re-elected and new star of the hard right, arrives shortly after and could win if the former president’s legal troubles end up disqualifying him.

Donald Trump is the target of several investigations for his role in the attack on the headquarters of Congress on January 6, 2021 or his management of the White House archives. A declaration of candidacy on Tuesday, however, would make a potential indictment more delicate.