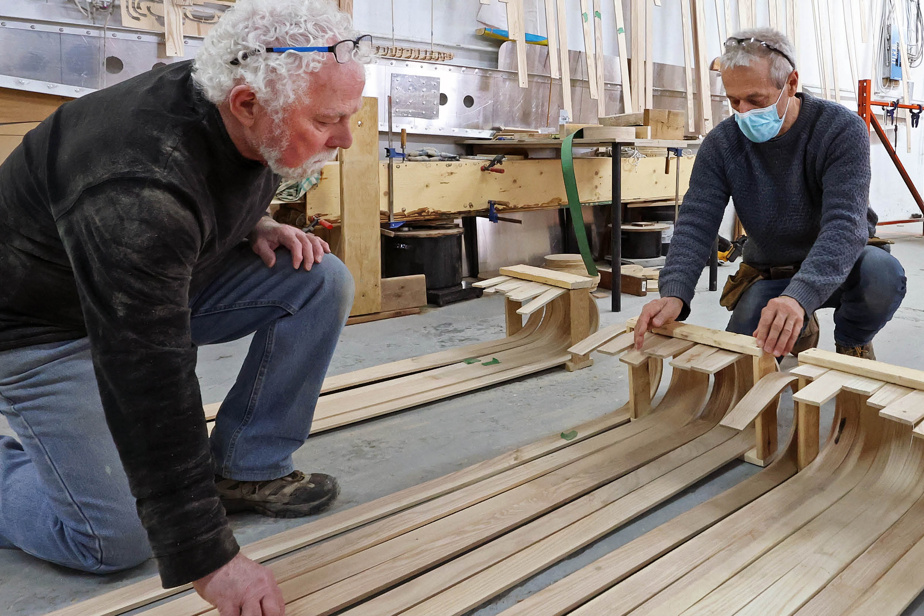 A few lucky ones will be able to hurtle down a snowy hill this Saturday on hand-made toboggans in Montreal, with the wood of ash trees cut down because they were infested with the borer.

These slides took shape in the workshop of the organization Jeunes marin urbains (JMU), in the Hochelaga district, where boats are usually built.

“Since we couldn’t hold our sail-oar construction workshops at the beginning of winter, because of COVID, we thought it was the perfect time to see if we could make slides” , says the president of JMU, Yves Plante.

“We have expertise in bending wood, so we wanted to use it for something else. »

In the workshop, curved wooden slats wait to be assembled. Several traditionally designed slides line up vertically at the bottom – the longest is over 10 feet and can accommodate eight or nine children.

Before arriving at the finished product, ash slats, whose wood was provided by the City of Montreal, must be soaked before steaming them for a few hours.

Once the wooden slats are made more flexible, they are bent to take a rounded shape, on a jig where they remain stuck for 24 hours. They then dry in a frame for a few days. It is then necessary to assemble the slats: six are used, connected by crosspieces. Yves Plante adds two guides under the slide, to direct the descent properly. It is then enough to varnish it and to affix the acronym of the JMU to it.

The Rivière-des-Prairies–Pointe-aux-Trembles borough purchased three of these slides for $1,300. This Saturday, they will be made available to the public at Saint-Jean-Baptiste Park, as part of the Zone active equipment loan program.

“Adults find that it makes them think of their youth, while children see the potential of being able to have fun together,” says Yves Plante, who tested his creations on a few mounds in the city.

Our goal is to make waterslides accessible to everyone.

Other boroughs are considering acquiring slides to make available to residents.

The sale of toboggans is a way for the organization to finance its activities.

The JMUs, which have been around since 2015, usually make sail-rowing boats large enough to carry 10 people. Their fleet now has 10, which are used during various events aimed at discovering the St. Lawrence.

“Montrealers are islanders, but they don’t realize it because they can’t see the river,” notes Mr. Plante. When we take them on the water, they are very surprised. It gives them a whole new perspective. »

Workshops allow you to learn how to make a real boat, or a model for the youngest.

Other events (day camps, initiation to navigation sessions, etc.) allow you to go on the water, from Pointe-aux-Trembles, and learn more about this river that bathes Montreal .