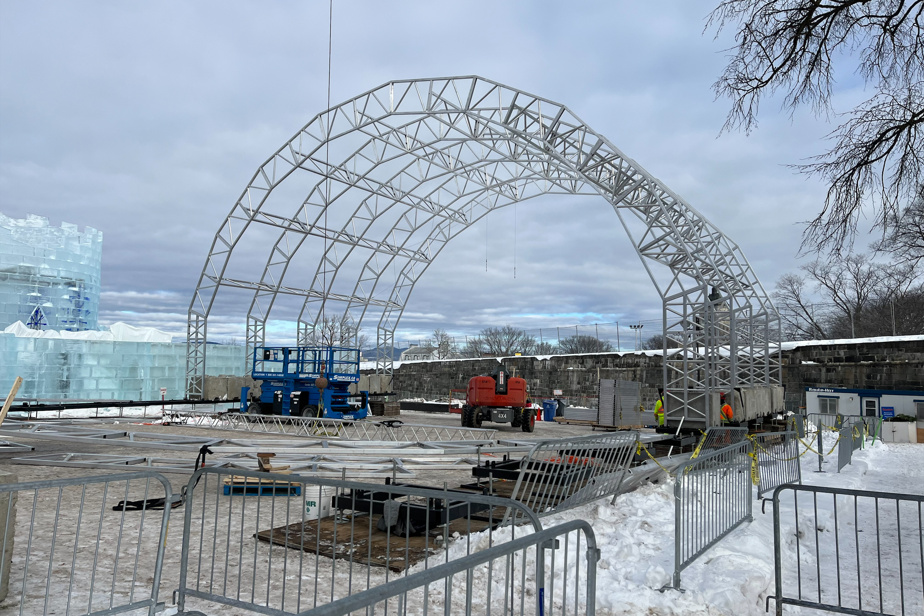 It is the most imposing temporary dome ever erected in Quebec, they argue. And perhaps in the world for those erected in winter.

The structure designed, manufactured and installed by the Quebec company Unisson for the Quebec Carnival will host gatherings and shows in front of the Parliament, in the courtyard of the Palais de Bonhomme. His erection has just ended.

“At Unisson, we export around 80%,” says Olivier Jobin, vice-president of business development. When the Carnival called us, we were very happy to be able to work for a local company and a Quebec flagship. »

It is called a dome for the sake of simplification, but it is in fact a barrel vault: a semi-cylinder made up of a row of arches stretched by a membrane.

Unisson is used to imposing structures and reputable clients. Founded in 1977 by Pierre Jobin, the Saint-Roch-de-l’Achigan company has created stage structures for the halftime show at the Super Bowl and for the tours of artists such as Beyoncé, Lady Gaga and Céline. Dio.

But this time, the mandate for the no less famous Bonhomme Carnaval included two unusual challenges.

The first was the timeline.

“The Carnaval de Québec contacted us in October,” says Olivier Jobin. They arrived with a small design on a napkins, then they told us about the concept they wanted to do. »

This drawing on napkins is an image. A metaphor. The document was in fact a very schematic illustration of the Carnival’s intentions.

The company has two factories in Saint-Roch-de-l’Achigan, including a new one built in 2019, and another in Quebec City, in the Saint-Augustin-de-Desmaures industrial park. All three are dedicated to the manufacture of triangulated frames in aluminum rods and steel bases.

“It’s still incredible, notes Olivier Jobin. We’re going to use one word: it was brutal, production-wise. To be able to design and manufacture in such a tight time frame, we had to prioritize the project. »

For more than two months, all of the company’s 70 employees and some thirty suppliers, or about a hundred people, worked on the smiling but demanding Bonhomme Carnaval project.

Do not fart at the fret

The other difficulty resided in the well-known fact that the Carnaval de Québec takes place during the cold season.

Low temperatures, the risk of winter storms and snow accumulation posed problems that a temporary summer structure does not encounter.

“All the engineering and design were done differently, and we had a lot more parameters to take into account,” explains Olivier Jobin.

“What’s really special about this project is that it needed a load capacity of 45,000 pounds to hang the lights, the stage equipment, plus the weight of the snow. At the engineering level, a lot of work has been done. »

The membrane had to withstand extreme cold and its surface had to let the snow slide to the ground to prevent it from accumulating too much.

In short, the Olympic Stadium effect had to be avoided. “Exactly, that was our challenge,” he says.

The Carnival also requested that the stage be heated “to allow the artists to perform without having their fingers frozen on their guitars”. Five directional electric heating modules will adapt to the scenography of the different shows.

The assembly of the dome, which began on Monday, January 16, is to be completed in seven days. “As we speak, the structure is three-quarters up,” he said in the interview held on January 19. “We would have been able to assemble it in three and a half days if we had wanted to work day and night. »

But while the dome of the Pantheon in Rome is still holding strong 20 centuries after its construction, that of the Carnival will only last as long as the snow lasts, for the space of a winter.*

Unison has other temporary exploits in the works, however, including one to be delivered at the end of April and which will be announced within a few weeks. “It’s something grand! », already promises Olivier Jobin.

Firebarns, the Quebec specialist in hot sauces, has piqued the curiosity of French grocers: in a few weeks, you will find on the supermarket shelves of the food giant Carrefour, its Sriracha sauce, its BBQ sauces and four of its spices. “For the moment, we serve the French branches of Carrefour but we are aiming, in the short term, for Europe as a whole,” said Pierre-Olivier Drouin, co-owner of Firebarns, in a press release. Firebarns, whose brand should appeal to French ears as much as its sauces to their taste buds, has established its strategy: it wants to make recipes with chefs. “The best springboard for becoming known to the public are very often restaurants,” added Frank Ménard, the other co-owner of the company they founded in 2015. To this end, the Firebarns team has participated from January 19 to 23, 2023 in the Sirha show in Lyon, which aims to be “the world reference event” for hotel and food catering. Firebarns has about twenty employees in Quebec. Its BBQ sauces, condiments and spices entirely prepared in Quebec are offered in more than 1,000 points of sale in Canada.

Contrary to what we thought, the pie maker was not cooked. The ovens of Pâtisserie Gaudet, which announced its bankruptcy last August, could soon heat up again, following the acquisition of its assets by the American company Table Talk Pies, announced on December 22. A former competitor of Pâtisserie Gaudet, Table Talk Pies owns three factories in the United States. Its 300 employees produce nearly 250 million tarts and 25 million pies, distributed in the 50 US states, Puerto Rico, Mexico and Canada. Its president, Harry Kokkinis, has expressed his intention to reopen the Acton Vale plant and get it back up and running “as quickly as possible” to make pies for the Canadian market again. The resurgent company will take the name of Table Talk Canada. Table Talk has entrusted the former general manager of Pâtisserie Gaudet, Georges Berbari, with the task of restarting production. “It is out of the question that the activities of the Acton Vale factory will be relocated in favor of the three American factories of Table Talk Pies”, assured the latter in a press release. But we do not yet know how they will share the pie of the Canadian market.

The managers of Creopack, a company specializing in the design and manufacture of custom-made protective packaging for the transport of industrial, aeronautical and electronic products, have announced the acquisition of Montreal-Express Packaging (EME), which is dedicated to its involved in the handling, packaging and storage of large format equipment. By adding to its services the storage space of 35,000 sq.⁠2 of EME and its high-capacity overhead crane, Creopack is now able to offer its customers the complete specialized packaging sector, from the design and manufacture of the container to the packaging, storage and secure containerization of large format parts. The company, whose head office is located in Mount Royal, now has three plants totaling 140,000 sq.⁠2 and more than 120 employees. Emballages Montréal-Express (EME), located in Châteauguay as its corporate name does not indicate, employs about twenty people. They will continue to work on site.

The Transrapide Distribution Center, owned by the Huot Group, will add ten new buildings in 2023 to the four that make up its storage facilities on the South Shore of Quebec. In response to strong growth in demand, its storage area will triple to nearly 1,250,000 sq.⁠2. The investment totals more than $100 million.