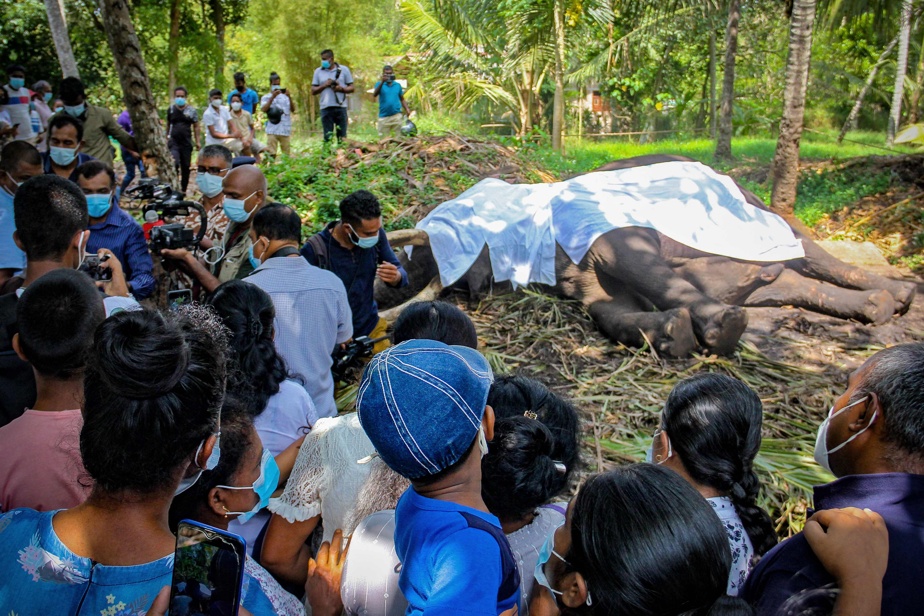 (Colombo) Nadugamuwa Raja, Sri Lanka’s holiest elephant, died on Monday at the age of 68, prompting a wave of emotion as well as a presidential order that the enormous remains be stuffed and kept for posterity.

On Monday, a mourning procession paid homage to Raja, including schoolchildren and saffron-robed Buddhist priests who recited prayers and marched to touch his mighty ivory tusks.

President Gotabaya Rajapaksa decreed that the animal be declared a “national treasure” and ordered that its remains be stuffed “for future generations to witness”, his office said.

The sacred animal was the leader of the 100 illuminated elephants that take part in Esala Perahera, an important Buddhist festival in the central city of Kandy, every year.

Raja carried during night processions a golden chest containing Buddhist relics. He had assumed this role from 2006 to 2021.

The pachyderm had enjoyed an armed escort from elite commandos since 2015, after a motorcyclist nearly ran into it during one of its outings for a temple ceremony.

Raja was due to be delivered to taxidermists later on Monday to be stuffed after performing Buddhist burial rites, his owner said through a spokesperson.

The choice of his successor could require a long process, the elephant must belong to a particular caste and present specific physical characteristics.

Its four legs, trunk, penis, and tail should all touch the ground when it stands up. It must have a flat back, measure approximately 3.60 meters, its tusks must have the rounded shape of the traditional rice fan.

An exception was made for Raja, who was only 3.20 meters tall, but was still the tallest in the country at the time.

Raja was born in India and gifted to Sri Lanka by an Indian prince.

When the latter died in 1988, aged 72, the then government declared a day of national mourning and the remains of the elephant were also naturalized. A museum is dedicated to him within the grounds of the Temple of the Tooth in Kandy, where a tooth of the Buddha is said to be preserved.

The elephant is a protected species in Sri Lanka where the laws have been tightened, and where the capture of wild elephants is punishable by death.

However, many elephants are treated as pets, seen as symbols of high social status. Animal rights activists claim these elephants in captivity are often abused, which their owners and temples deny.