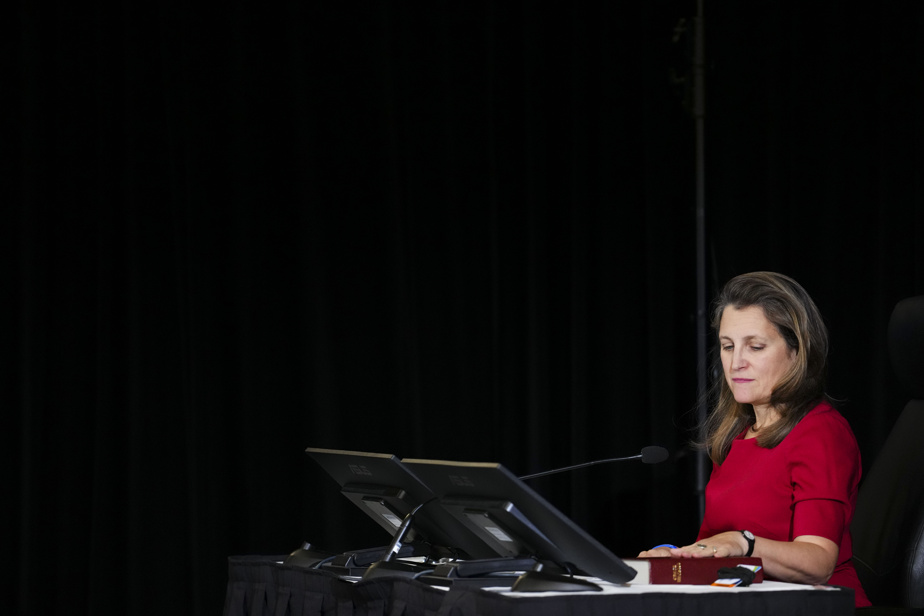 (Ottawa) Finance Minister Chrystia Freeland feared that the United States would impose protectionist measures in response to the blocking of the Ambassador Bridge, which would have had a domino effect on the Canadian economy. A call from White House economic adviser Brian Deese on February 10 crystallized that concern.

“They are very, very, very worried,” the minister wrote in an email after their conversation. “If it’s not settled by 12 noon, all of their auto factories in the northeast of the country will shut down. »

The document was presented in evidence Thursday at the Commission on the state of emergency during the testimony of Mr.me Freeland, who is also deputy premier. This public inquiry must determine whether the historic use of Emergency Measures Act to end the “freedom convoy” in Ottawa and blockades of border crossings elsewhere in the country was justified.

“It was a dangerous moment for Canada,” she said. Very, very dangerous. »

Pressure from car industry and banks

She added that Mr. Deese had just realized how integrated the auto industry in Canada and the United States was. The parts needed for crafting cross the border several times during vehicle construction.

The presidents of major Canadian banks also feared a devastating effect on the Canadian economy and Canada’s reputation. They were urging the federal government to put an end to truck convoys the day before the use of the Emergency Measures Act.

A meeting had been organized between them and the Minister of Finance on February 13. The objective was to discuss solutions to end the “freedom convoy” and, above all, the blockages of trade corridors.

An account of that discussion presented by the Commission’s co-chief prosecutor on Thursday gives some insight into the mindset of bank executives. Their names and those of their institutions are redacted.

One of them had just returned from a stay in the United States where an investor had told him: “I will no longer invest a penny in your banana republic in Canada. »

“If the investor you’re talking about is American, tell him we’re not like the United States where people have outright invaded the seat of legislative power,” Ms.me Freeland referring to the invasion of the Capitol on January 6, 2021.

“I had an imperative duty at that time to stand up for the Canadians,” she said during her testimony, taken briefly by emotion.

“We didn’t save NAFTA just to ruin it”

She explained that the anxiety was then at its peak. The Canadian economy was barely recovering from the pandemic. The government was preparing for a trade war with the United States and feared that the closure of the Ambassador Bridge at Windsor, Ontario, would further fuel protectionism south of the border. President Joe Biden’s Build Back Better program was already threatening the Canadian auto industry.

The minister testified Thursday that the Canadian government had already prepared a list of retaliatory measures that would have affected $100 billion in US imports into the country if this program went ahead.

“We didn’t save NAFTA just to be ruined,” she wrote on the morning of February 14 to Flavio Volpe, who heads the Auto Parts Manufacturers Association. . She then said she was “determined to take strong measures”. Mme Freeland led the renegotiation of the North American Free Trade Agreement with the United States and Mexico in 2019.

In cross-examination, Allan Honner, lawyer for the group Democarcy Fund, which represents demonstrators arrested in Ottawa and Windsor, asked him if the government had used the Emergency Measures Act because he was “completely overwhelmed by events” and under “tremendous pressure from the United States”.

The Minister rejected this argument. “I absolutely disagree with that,” she replied.

Canadian Constitution Foundation lawyer Janani Shanmuganathan asked her how the economic harm she described met the definition of national security threat in the legislation. The law instead mentions espionage and sabotage, foreign interference, use of serious violence and activities that aim to overthrow the government, and contains no mention of the economy.

The minister had testified earlier that “the weakening of a country’s economy can fundamentally harm the security of that country”. She also argued that Canada had become “a powder keg” and that violent clashes between exasperated citizens and protesters could happen at any time.

Canadian Civil Liberties Association lawyer Ewa Krajewska argued that in a democracy like Canada, “economic security does not trump” the right to protest.