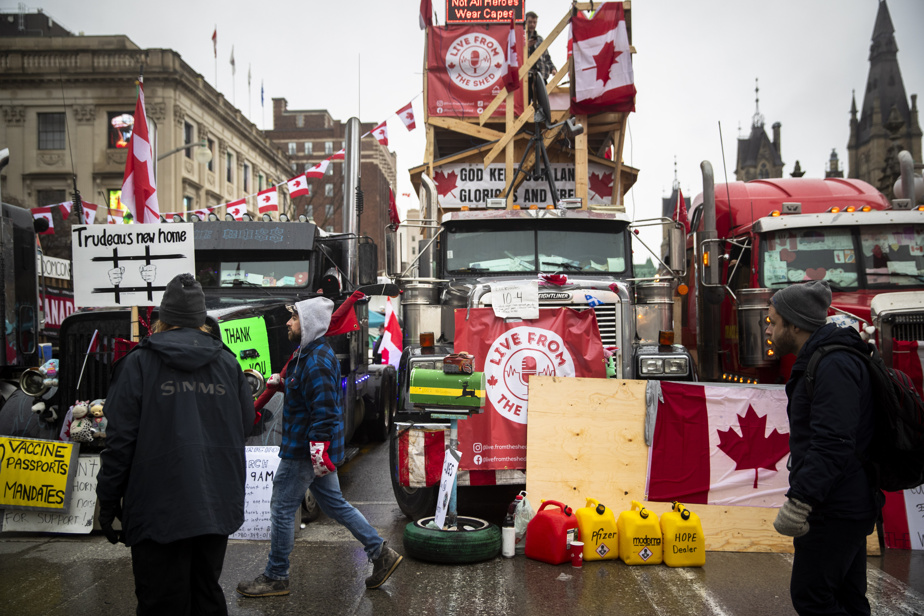 (OTTAWA) Neither the “freedom convoy” paralyzing downtown Ottawa nor the trucks blocking border crossings elsewhere in the country posed a threat to national security, according to the director of the Canadian Intelligence Service of security (CSIS), David Vigneault. Part of his written statement was entered into evidence at the Emergency Commission on Monday.

The federal government had justified the use of Emergency Measures Act to put an end to these demonstrations by the serious threat they posed to the security of the country. However, they did not fulfill the criteria defined in Canadian Security Intelligence Service Act to be considered a threat to national security. These include espionage and sabotage, foreign interference, the use of serious violence and activities aimed at overthrowing the government.

The public inquiry led by Judge Paul Rouleau must determine whether the historical recourse to Emergency Measures Act was justified in the circumstances. Under this legislation, security threats sufficient to declare a state of emergency must meet the CSIS definition.

Mr. Vigneault’s testimony to the Commission on the state of emergency is only expected next week, but the lawyer for the organizers of the “freedom convoy” gave a glimpse of his opening statements during interviews with the commission prosecutors. He then questioned Rob Stewart, who at the time was Deputy Minister of Public Security, and Dominic Rochon, who held the position of Assistant Deputy Minister for the same department.

“It’s the Cabinet that makes that decision and its interpretation of the law is what prevails here as well as the advice it receives,” said Mr. Stewart. His decision was obviously that the threshold [législatif] was reached. »

During his testimony on Monday, this senior Public Safety official admitted that he was concerned that the use of Emergency Measures Act cause an outbreak of violence. The CSIS had also advised the federal government that the use of this legislation was likely to increase the number of Canadians who “hold extreme anti-government views and would lead some to believe that violence is the only solution”, we were told. learned last week.

“One of my concerns at the time was the potential for serious violence,” Stewart said. He later claimed in his testimony that he had underestimated the Emergency Measures Act and that calls for further protests across the country subsequently ceased.

The idea of ​​using the Emergency Measures Act had been circulating for about two years because it had been considered during the pandemic. This time, the government was discussing using it to put an end to truck convoys in Ottawa and at several border crossings across the country. Mr. Stewart admitted in cross-examination that there were “several other tools in the toolbox”.

Washington was worried about truck convoys

The US Department of Homeland Security inquired about the “freedom convoy” crippling downtown Ottawa and other truck convoys blocking border crossings. Two senior Canadian officials from the Department of Public Safety participated in telephone conversations with their American counterparts.

“The previous year, with the events of January 6 on Capitol Hill, they still had potential extremist elements and there was also the possibility that convoys were happening around Washington,” said Dominic Rochon, who was then under – Deputy Minister in the Department of Public Security of the Canadian government.

The United States wanted to know how the Canadian government was dealing with a potential threat to national security, and worried about seeing the Canadian capital paralyzed by hundreds of trucks and blocked border crossings.

In all, three calls were made, including the first with Elizabeth Sherwood-Randall, Homeland Security Advisor for the White House. Those conversations with U.S. Homeland Security officials were briefly touched on Monday during the two senior officials’ testimony to the State of Emergency Commission.

After dissecting the police response and the motivations of the protesters, the public inquiry now enters into the analysis of the federal government’s response. Prime Minister Justin Trudeau and seven of his ministers are due to testify next week.