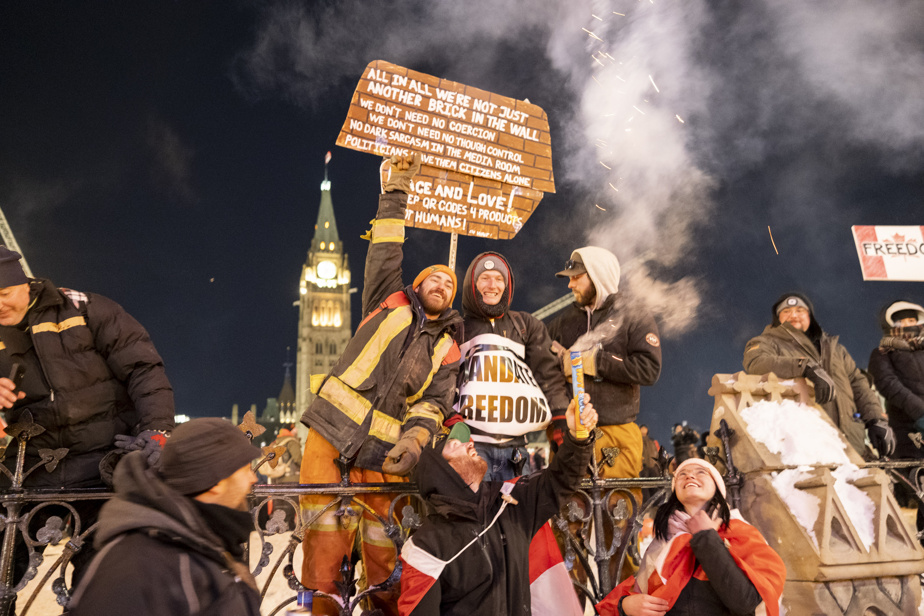 (Ottawa) Several fundraising campaigns have allowed the “freedom convoy” to raise more than 24 million through crowdfunding campaigns, transfers and bitcoins. Only a fraction of this money was returned to the truckers during the protest since much of the funds had been frozen.

The money was often deposited in personal bank accounts, which raised questions from banks and crowdfunding companies. Most of the funds ended up being returned to the donors. A smaller portion has gone into receivership.

Dan Sheppard, one of the lawyers for the State of Emergency Commission, profiled on Thursday the various fundraising campaigns set up to support the convoy of trucks that paralyzed downtown Ottawa for three weeks. .

One of the organizers of the demonstration, Tamara Lich, had launched a crowdfunding campaign on January 14 on the GoFundMe site, two weeks before the arrival of the first trucks in the city center of the federal capital. She also accepted money transfers by email. Of the $10 million raised, $1.4 million had been deposited into his personal savings account. Only $26,000 was distributed to the truckers because the TD Bank froze the funds.

Another campaign was launched on US crowdfunding platform GiveSendGo after GoFundMe froze funds to reimburse donors. It also raised nearly US$10 million, almost half of which came from the United States and about $500,000 from other countries. An undetermined amount was deposited in an account created on the Stripe payment platform by an American named Jacob Wells and 3.7 million Canadian dollars were deposited in the Stripe account of Chad Eros, the treasurer of the “convoy of the freedom “. The payment platform has placed 3.4 million in receivership after the court issued an injunction to freeze the funds of the “freedom convoy”.

Adopt-A-Trucker, another crowdfunding campaign on the American platform GiveSendGo was launched on January 18 by Chris Garrah, another participant in the “freedom convoy”. He was also receiving money transfers by email that totaled just over $30,000. Nearly $800,000 was raised on GiveSendGo, of which just over $330,000 was deposited into his RBC Bank account. Just over 40% of the funds came from the United States. Withdrawals of $200,000 were made, including $150,000 in cash. Just over $10,000 was used to pay for hotel rooms.

A person named Serge was also soliciting cryptocurrency donations for Adopt-A-Trucker. Other cryptocurrency fundraisers had been launched by various groups. The Commission has identified three. Besides Adopt-A-Trucker, there was also Honk Honk Hodl and Freedom Convoy Token launched on February 13 by Patrick King which did not work. In the end, the protesters received the equivalent of $8,000 in bitcoin from Honk Honk Hodl.

This account was started by a man named Nicholas St. Louis. Benjamin Dichter, the first witness heard Thursday on Day 16 of the State of Emergency Commission, explained that he had helped coordinate and promote this cryptocurrency fundraiser.

Mr. Dichter said he had traveled to the capital in January, at the invitation of Tamara Lich, one of the organizers of the “freedom convoy”, to be the spokesperson for the protesters. Its aim was to remove mandatory measures related to the COVID-19 pandemic and spread a message of “peace, love, freedom and unity”. However, he found himself in conflict with other convoy organizers over protest communications.

This public inquiry must determine whether the historic use of Emergency Measures Act by the federal government was justified in order to end the “freedom convoy” and blockades of border crossings elsewhere in the country. Tamara Lich and fellow protest organizer James Bauder are due to appear on Thursday. Hearings continue until November 25.

Mr. Bauder, for his part, created the “Canada Unity” group, which had participated in the development of the initial convoy plan. He had circulated a memorandum of understanding to overthrow the government of Justin Trudeau with the help of the Governor General and the President of the Senate. According to the scenario devised by this group, Mary Simon and George Furey would have formed a committee with this group to govern.

Canada Unity then demanded the lifting of all health measures against COVID-19 and the vaccination obligation imposed on truckers who had to cross the Canada-US border, considered “a violation of human rights”.