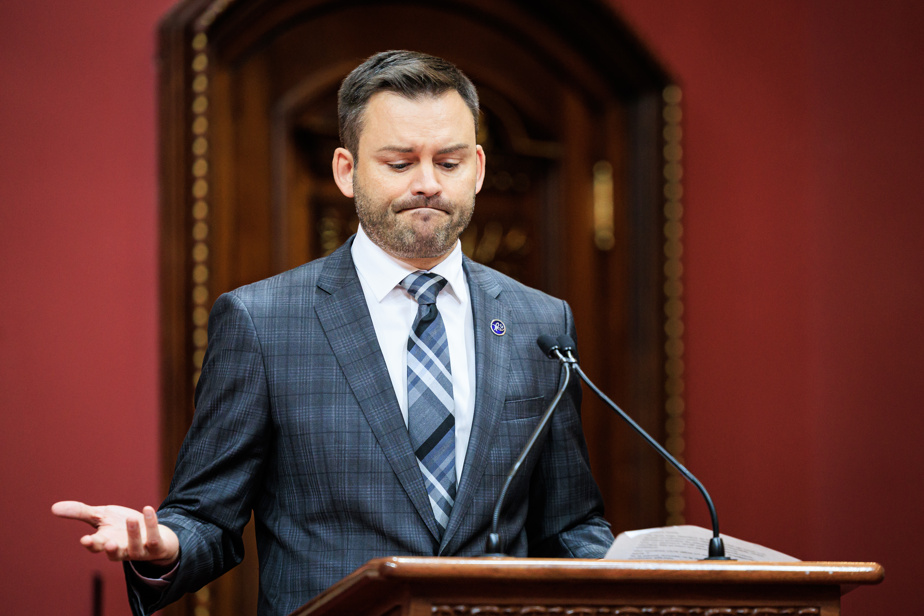 (Quebec) The Parti Québécois has signed a “discount agreement” for its budget and its speaking time in the National Assembly, deplores its leader, Paul St-Pierre Plamondon, who is now turning to public donations to hire political staff. The parliamentary leader of the Coalition avenir Québec, Simon Jolin-Barrette, deplores this exit.

“Under impossible conditions and having no other leverage, we managed, at the last minute, to make some modest gains before signing a discount agreement,” denounced Mr. St-Pierre Plamondon in a message broadcast on the social networks. He declined an interview request from The Press.

The PQ leader estimates that an annual budget of $570,000, a position of parliamentary leader and 7 questions per cycle of 100 questions will not allow him to do his job properly. He therefore launched a fundraising campaign to raise $120,000 by the end of the year to fill the two positions that “he [lui] missing” for “complete [son] crew “.

He harshly criticized the negotiation dynamic between the political parties, which resulted in “a generalized refusal to [ses] initial applications and a financial proposal making [son] almost impossible work”, and attacked the CAQ directly. He believes that the party of François Legault is actively working to eliminate the PQ.

“The CAQ wants to be certain that the PARTI QUÉBÉCOIS will not rise again,” he wrote.

“Vote of no confidence”

CAQ parliamentary leader Simon Jolin-Barrette deplores the exit of the Parti Québécois, which he finds “a pity”. “Mr. St-Pierre Plamondon, when he makes such an exit, it is a vote of non-confidence in his negotiator [le député] Joël Arseneau”, he launched.

We have already given more to the PQ. According to the regulations, the Parti Québécois had nothing, only the budgets of independent deputies. We, on the government side, have improved our offer three times. They end up with a budget of almost double. They have a parliamentary leader, with a leader’s cabinet, with full speaking time plus security, a company vehicle and all the perks that go with that.

For Mr. Jolin-Barrette, the agreement is “fair for all political parties”. His party, he said, had undertaken to recognize Québec solidaire and the Parti Québécois as parliamentary groups. “They are, with the resources to do opposition work,” he said.

But in the eyes of Paul St-Pierre Plamondon, the situation is unfair. The Parti Québécois and its three deputies obtained almost as many votes as Québec solidaire and its 11 elected officials (15.4%), and more than the Liberal Party (14.3%) which had 19 (21 the day after the elections) .

This point of view is shared by the interim leader of the Liberal Party, Marc Tanguay. “We didn’t get everything we wanted. We got what was reasonable to have. It is the same as the other three parties. I don’t agree with Paul St-Pierre Plamondon,” he said.

To see what the PQ leader writes on social networks about the agreement, “I wonder why he signed it,” said Mr. Tanguay. “The Parti Québécois will have a lot of speaking time. And it is clear that Québec solidaire will have more than the PQ, and we, more than Québec solidaire. It works that way. It is a basic rule, we work by the number of deputies who are ready to stand up and speak, ”he added.

The parliamentary leader of Québec solidaire, Alexandre Leduc, said he was satisfied with the agreement. His training is making significant gains there. QS gets 31 questions per cycle of 100, compared to 19 in the last legislature, and its budget climbs to 2.7 million. “We are very satisfied, especially since we were starting from a scenario where we were not sure of being recognized. I was a little worried,” said Mr. Leduc.

He said he understood Paul St-Pierre Plamondon’s frustration, but added “not having a magic solution to fix the distortion”. “Rightly or wrongly, the percentage of vote is not taken into account in the distribution of questions [à] The national assembly. The danger for us is that if we didn’t have an agreement and we had to go and plead before the presidency, we risked ending up with not much,” said Mr. Leduc.

“I preferred to use a strategy where I was going to secure recognition, and have speaking time representative of my weight in the opposition parties. I played my cards well,” he added.