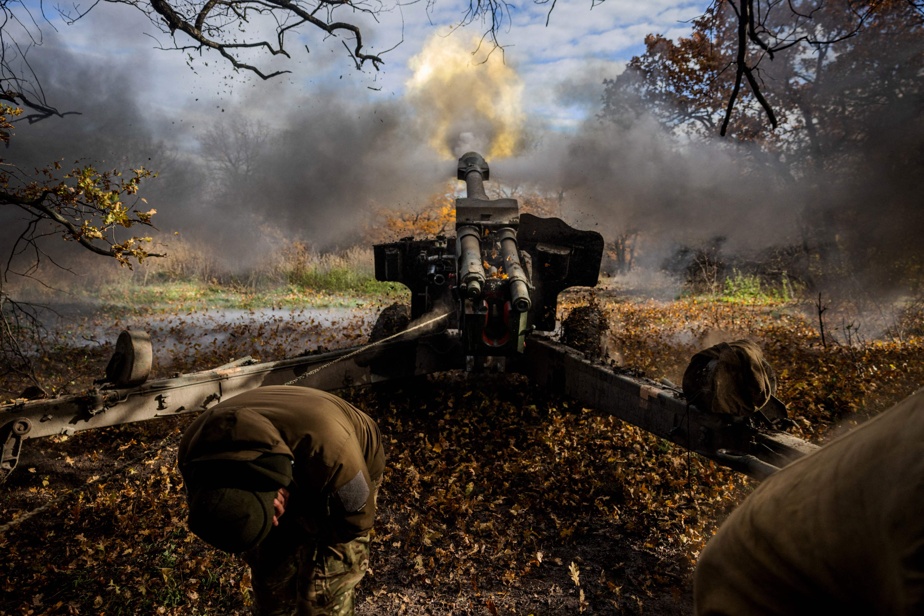 (Bakhmout) Bakhmout, in eastern Ukraine, 15 km from the Russian positions: “Ready”. The four Ukrainian gunners bend down, hands over their ears. ” Fire ! “. The warhead is expelled in a crash of flames and smoke towards a Russian position.

“According to the coordinates received, the target is infantry,” said Oleksandr, 37, between two orders on the radio. He commands this small group of gunners from the 58e motorized infantry brigade of the Ukrainian forces.

Less than 30 seconds later, perhaps more, the 50 kg shell, recovered from the Russians after their withdrawal from a nearby town and said to be “fragmentation”, will explode in the sky about 15 km away, covering munitions the position of a group of Russian soldiers.

In support, a Ukrainian drone ensures “in real time” the effectiveness of the shooting of the old Soviet D-20 cannon, and helps to refine the next one.

In Bakhmout, a city in the Ukrainian Donbass, the battle has been going on for four months in its active phase. Since the start of the Russian invasion, it has been one of the longest and said to be one of the most lethal for the two armies, without the losses being quantifiable.

But the front has now remained almost static since the beginning of October, despite some captures which can be counted here in meters, and immediately lost, by one side or the other.

On the Russian side, Moscow supports with all its strength, supplemented by contingents of mercenaries from the paramilitary group Wagner, sent daily to the death on the front line, and renamed “single-use soldiers” by the Ukrainians.

The latter, on the counter-offensive on the other southern front, contented themselves with maintaining their lines, trying to lose as few men and equipment as possible in this battle of attrition, led by the Russians.

“The military proverb says that the sweat of the artillery saves the blood of the infantry”, argues Oleksander, who, after the deadly strike on the enemy line, hopes to have been able to save the lives of some of his.

The gunners now have a few minutes to decamp before the Russian reply. In the meantime, they open and share a packet of sunflower seeds to celebrate their strike.

5 km from the Russian positions: in a partly devastated part of the city (with 70,000 inhabitants before the war), the basement of an anonymous building houses the command and the garrison of the 58e brigade.

This is the “Monday rotation”. Fifteen infantrymen have just arrived, guiding themselves in the underground by the light of the mobile phone. The mines of the soldiers are very tight. Bakhmout quagmire has a bad reputation.

The 58e motorized infantry brigade of the Ukrainian forces, whose motto is “Together until victory”, fought the first part of the war on the southern front of Donbass, in Peske, before being deployed between May and September in Bakhmout.

In the cigarette smoke and candlelight when the generator fails, a soldier sits on a chair, in charge of filling the ammunition, another goes to get the barrel of borscht (soup), another takes a nap, again in his gear, straight in his chair.

What do they expect there? “The less we know, the better,” notes Bullet, a 25-year-old volunteer soldier, assistant “grenade launcher”, sweat and fog under his glasses.

Above them, the morning bombardment intensifies. From there, any movement of the brigade to the line of contact will be by armored transport.

Outside, “the limousine” has arrived. In the BMP-1 – a Soviet infantry fighting vehicle with not the most modern armor and sometimes called “the tomb of our brothers” – between superstition and common sense, soldiers avoid sitting on the side which will roll exposed to the Russian positions.

The tracks of the BMP-1 cross the river and engage towards the field of ruins of this part of the city to reach the north-eastern sector of Bakhmout, of which the 58e charging brigade, the 93e holding it southeast.

1.5 km from the line of contact: the last Ukrainian covered position, in the northeast of Bakhmout, is sheltered in the ruins of an industrial warehouse.

From this hideout, from the “first line”, the last before the “zero line”, a group of five soldiers is in charge of high-risk daily outings, to supply the line of contact with ammunition or logistics, but also with evacuation of the dead and injured.

AFP was not allowed to go any further.

“We go out in two (armored) vehicles, one covers the other,” explains “Demon”, 29, with sunken cheeks and hair stuck to her face, taking off her helmet.

All the interventions of the group of 58e take place under Russian fire, and are covered by salvoes of fire from the RPG rocket launcher in the direction of the enemy. From 200 meters, not before to avoid the friendly fire accident.

“Our mission is to leave as quickly as possible and without losing anyone,” adds Demon.

“Petrokha”, their sergeant, smokes a cigarette, two fingers grinding the filter, an eye on the sky from the door of the hangar, to watch for any tracking of Russian drone on its hiding place.

“Total, because we’re using everything, artillery, air force and…” his men, he says, his voice choking.

“They (the Russians) dump human meat, men they no longer consider as men, but as ammunition,” he continues.

“It’s been 70 years since we’ve seen that,” concludes the sergeant, very moved.