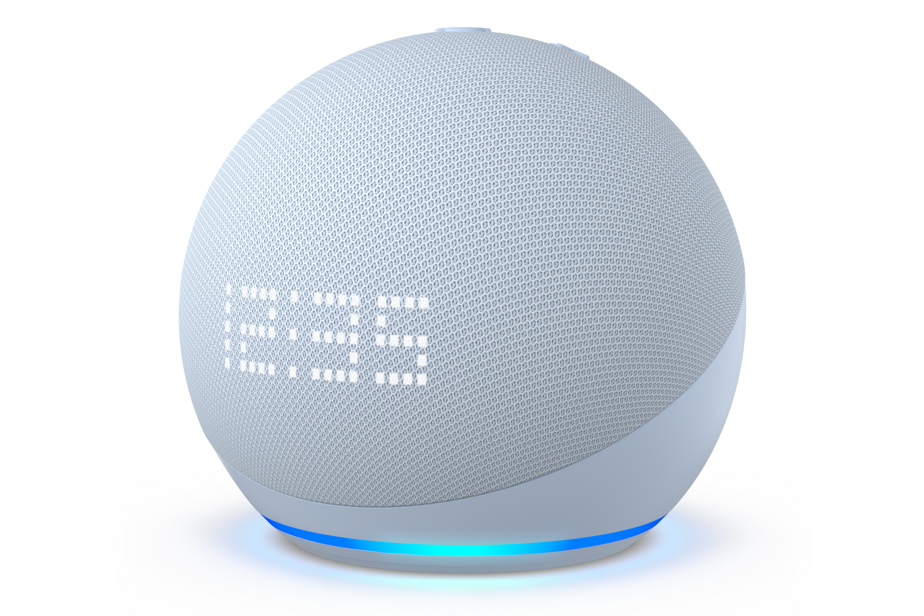 For its fifth generation, Amazon’s affordable smart speaker, the spherical Echo Dot with Clock, inherits notable small improvements, like a motion sensor, thermometer and new languages. But while its LED display is now versatile, it’s so bright you won’t want it on your nightstand.

Amazon didn’t just launch the smart speaker market in 2014, it’s also the most prolific manufacturer today, with 10 models where its competitors have pruned their catalog. The most affordable of the group is the Echo Dot, which became spherical in 2021, for which a slightly more expensive version with an LED strip to display the time has been planned.

Here we are in 2022 with the fifth generation of the Echo Dot: in addition to the time, the band made up of large luminous dots now displays small additional information. If we ask Alexa, the voice assistant integrated into the Echo Dot, her weather forecast, she answers aloud and the temperatures are displayed. If asked for a rock song, she plays it and scrolls through the name of the band and the play.

The sound quality is satisfactory, superior for a price comparable to that of a Google Nest Mini, but lower than that of an Apple HomePod Mini almost twice as expensive. We’ve got a handy little speaker here that will sound good in a closed room, but you won’t be raising a party with its 100mm speaker, unless paired with other compatible devices.

This little ball is controlled by four buttons on the top: two for the volume, one to manually activate Alexa and the other to mute the microphone.

For home automation, the possibilities are dizzying. This Echo can react to different noises – barking, baby crying, coughing, water noises, movement – ​​and trigger the chosen reaction.

By running water near the Echo Dot, we turned on one of the lights in the living room. When a presence is detected, it plays classical music in the office.

Fortunately, this potentially disturbing motion detection function can be deactivated and the microphone muted.

Alexa manages hundreds of “skills”, or skills, linked to as many manufacturers. Managing home automation devices seems easier and more efficient with Alexa than with the Google Assistant. Grouping together all the Christmas lights to turn them on half an hour after sunset is for example very easy with Alexa.

As for the quality of voice interaction with this voice assistant, it’s pretty much on point, especially since we added “Canadian French” in 2019. No need to speak international French to ask for the time or the distance to Quebec City, and most general, topical, scientific or cultural questions are answered satisfactorily. Alexa in Canada understands both official languages ​​interchangeably, but seven have been added to it, including Italian, Hindi, Portuguese and Arabic. However, it should be noted that certain features are not supported: the request for music in Arabic, for example, which is done by Spotify in our case, practically does not work, as do the home automation controls for devices named in French.

The Echo Dot now includes a thermometer which allows for example to trigger the heating from a certain interior temperature, or simply to check the temperature.

While the Echo Dot with Clock is touted as the perfect bedside table companion, three nights was enough for us to kick it out of the bedroom. Its light-emitting diodes are so bright, even in minimal light, that it seems as if you’ve forgotten a switched-on cell phone nearby. You can turn off the display completely, but not on a schedule. We then lose the main selling point of this device.

Where Alexa falls far short of the Google Assistant is in grocery list management, probably our favorite feature. While you can consult your Google list simply by creating a web browser favorite shared between several Android users, you have to go to the application Alexa and create multiple accounts.

Our experience of the Echo Dot with clock replacing an alarm clock was irritating, but perhaps some users will be less sensitive to its harsh light. One thing is certain, apart from this aspect, this is a versatile little device that often turns out to be very useful, well designed and offers satisfactory sound for its low price.