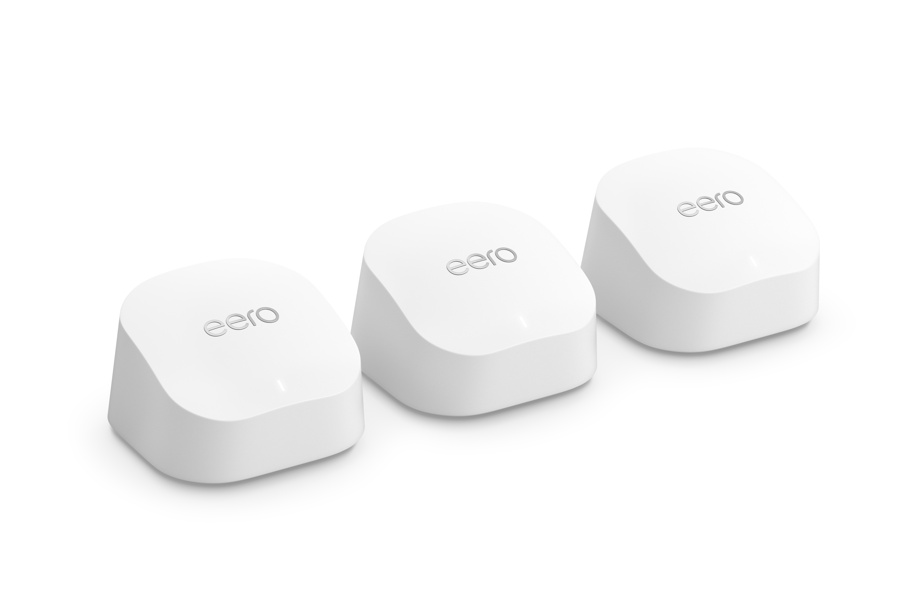 At the start of the test, Amazon’s three lovely eero 6+ routers gave us a fast, stable, whole-home mesh network. Everything went wrong the last few days with an incomprehensible bug. Shame.

Disclaimer: This review is dichotomous. It reflects as faithfully as possible our experience, largely enthusiastic at the beginning.

Amazon’s three eero 6+ routers form a mesh network, capable of covering up to 460m2 and connect 75 devices simultaneously. They are WiFi 6 rated and have access to 160 MHz bandwidth.

First observation: they are very pretty and discreet, these routers, small white boxes 97 mm wide and 65.9 mm high. Their price is in the average for this type of product, at $429 for three units.

We begin the installation by connecting the first router eero 6+ directly to the modem, by Ethernet cable. We download the application eero and we add the other two routers. The additions went smoothly and we effectively had a full WiFi signal everywhere in the house. Better, because secondary routers can be placed near the windows, the signal traveled farther than ever in the yard and in front of the house.

First test, the most crucial for a mesh network, successfully passed.

This network has proven to be extremely stable for two weeks, providing signal without slowing down to several users at the same time. We pushed the machine on three occasions with a large video game download, two teleconferences and two films broadcast live: an impeccable result, without delays and without cuts. The WiFi can deliver a total of 1.3 Gb/s wirelessly and each router also has two Gigabit ports, which of course exceeds the capabilities of our home internet.

The management interface offered in the application eero is pretty straightforward, with each router showing up in the homepage and showing where each device plugs in. A glaring strength of eero was that barely one in ten devices was not recognized automatically. Most of the other routers we tested showed a lot more “unknown devices.” At a glance, you can see a dashboard of network activity, with total downloads and network speed. For one month, you are entitled to the eero Secure+ service free of charge, which then costs $12.99 per month. eero monitors network traffic and intercepts threats. In our case, it stopped 14 in two weeks and performed 168,513 analyses. It is difficult to say whether these threats were serious.

The first bug appeared precisely on April 22, when a Google Home mini that serves as an alarm clock had no internet connection at the most important time of its day, in the morning. We later discovered that our four Google Audios were no longer connecting to the internet.

This was a major bug, since these devices were unquestionably the most frequently used by the family.

Strangely, the Nest Hub, with its screen, didn’t have this problem. No other appliance in the house was affected by this outage.

We tried, without success, to reset one of the Google Homes, which turned out to be impossible since it no longer had any access to the internet. We restarted the other Googles. Nothing. In desperation, we reinstalled the old router. All problems are gone.

It may seem unfair to crucify a device because of a single bug, no matter how major. And it must be admitted that other users may never have to suffer it. In our case, it took two weeks to see it appear. Would we have discovered others in the longer term? It is a bad omen.

One thing is certain, we cannot honestly recommend its purchase. The eero 6+ has undeniable qualities, but in our case it did not pass the most important test for a router, reliability.