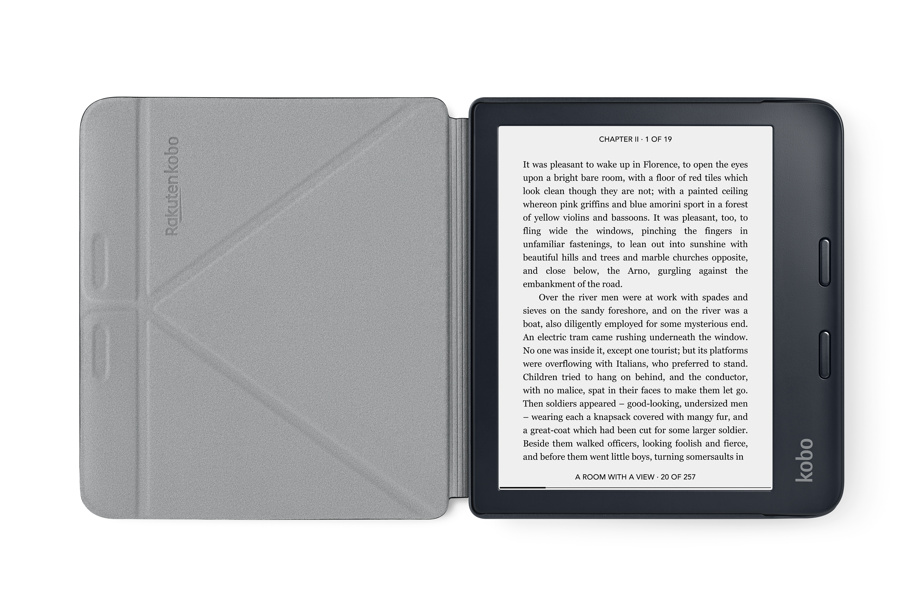 Smaller but improved screen, storage increased from 8 to 32 GB, ability to listen to audio books, still maximum format compatibility: the Kobo Libra 2 is an attractive reader, sold for $80 less than its big sister, the Sage. It’s up to you to decide if this discount is worth some sacrifice.

Launched at the same time as the excellent Kobo Sage last fall, the Libra 2 incorporates essential features, but at a lower price. Paying $219.99 instead of $299.99 still gets 32GB storage instead of 8GB like in older models, and an upgraded touchscreen called E Ink Carta 1200 HD, with 300 resolution dpi and the new Dark mode.

Above all, and this is a decisive element for us, we have the soft orange light, called ComfortLight Pro, which cuts out blue light and is less aggressive.

The Sage and the Libra 2 keep the two mechanical buttons, which can be used instead of the touch screen to turn the pages. The USB-C socket, which is more convenient and allows for better bandwidth, is now the standard.

You can pair the Libra 2 with Bluetooth headphones to listen to audiobooks rented for $ 12.99 from Kobo’s virtual store, which includes some 100,000, including an honest choice in French. The audiobook appears in your library and you control its playback with a graphical interface. We paired the Libra 2 without difficulty with three different models of headphones. Without having the agility of an iPad or a computer, the Libra 2 does its job fluidly.

Like any good Kobo eReader, it is compatible with the 15 most popular formats, including ePub, and can in theory display books borrowed from the library. Finally, it is classified IPX8, waterproof for 60 min up to 2 m deep.

For $80 less, you get a 7″ screen rather than an 8″, but that one isn’t compatible with a Kobo stylus. This smaller device fits better in a coat pocket and weighs 215g rather than 240.8g, which puts a little less strain on the reader’s arm. The downside of a smaller screen is that it obviously displays fewer characters.

The other big compromise is the processor, which is here at 1 GHz rather than 1.8 GHz. The difference is noticeable if you start browsing through your library or move forward several pages at a time. You have to be more patient.

The battery is smaller, containing 1200 mAh rather than 1500 mAh. Surprisingly, and perhaps due to the lower CPU power and smaller screen, we found the Libra 2’s battery life to be better than the Sage’s, around four weeks versus three.

The great function missing from the Libra 2 is the possibility of sending books to it by Dropbox, which saves us from going through the cable and the computer.

The battery life of this Kobo eReader can be temperamental: in one day, at the start of our test, it drained by 33%. It must then be turned off, and not left on standby, which generally solves the problem.

Let’s mention for the umpteenth time the unacceptable headache of borrowing books from Quebec libraries, a problem that Kobo and Adobe seem to have been making fun of for three years. Thanks to the tenacious readers for the advice that follows. In summary, it is impossible to transfer to the reader a recent digital book borrowed using the mandatory software, Adobe Digital Editions 4.5. You have to go back to version 3 of ADE (which is generally not possible on a Mac), or borrow and transfer older digital books at the same time as recent ones.

The most recommendable reader at Kobo remains for us the Sage, much faster and which allows the transfer by Dropbox. But we must agree that with an $80 discount, the Libra 2 is an excellent reader, with a good price-performance ratio that will satisfy the vast majority of users. Its lightness and smaller screen will even be advantages for some.

Too bad we still come up against these problems of the battery emptying inexplicably and of complicated borrowings from the library.