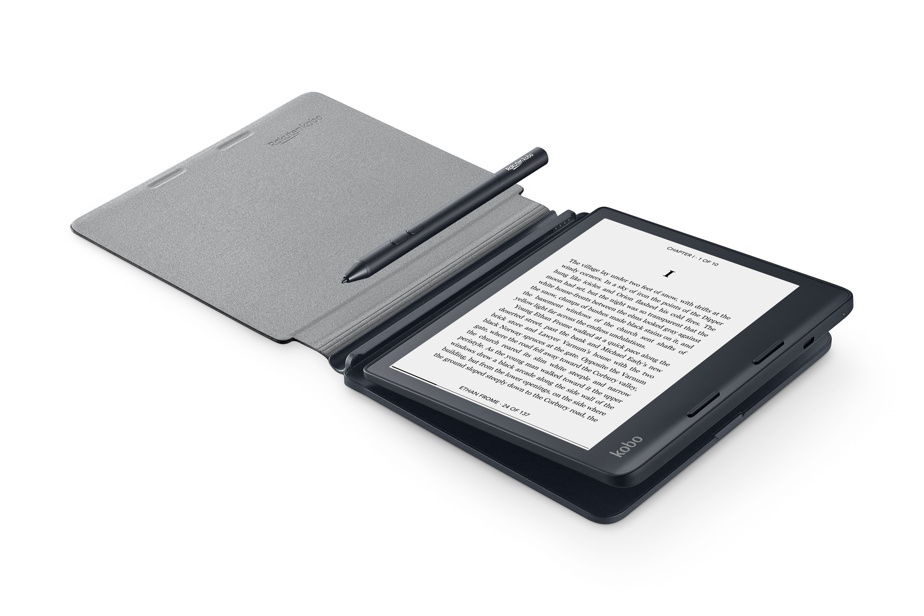 With the Sage, Kobo delivers its best e-reader, more powerful with pen compatibility and audiobook listening. However, the battery life and some software bugs leave us hungry for more.

The Kobo Sage is in many ways similar to the one that was until November the best e-reader available, in our opinion, the Kobo Forma. Equipped with an 8 ” backlit e-ink display, it offers a beautiful resolution of 300 dpi and still includes the soothing orange light.

At 240.8g and with an IPX 8 rated water resistance, the Kobo Sage sits well in the hand and becomes the perfect companion for reading anywhere.

We also kept the two mechanical buttons on the side, which we use as often as the touch keys on the screen to go back or forward. You can send books there by Dropbox, eliminating the need to connect to a computer with a cable for transfer.

The novelty with the Kobo Sage, first, it is a much more powerful processor, quad-core at 1.8 GHz.

You can feel from the first use that this e-reader is faster, that its screen is more responsive to all commands.

The port for charging and transferring is finally USB-C, more convenient and which allows improved bandwidth.

The storage memory has gone from 8 GB to 32 GB. You can download and listen to audio books on Bluetooth headphones on the Kobo library, which includes some 100,000 books, for $ 12.99 per month, including an honest choice in French. The downloaded audiobook appears in your library, you connect the eReader to your favorite headphones or speakers, and then manage playback with a minimalist interface, which basically allows 30 second skips and playback pause.

The experience is smooth, not as efficient as with a more powerful tablet, but quite usable.

As is the standard at Kobo, the Sage is compatible with the most popular formats, including ePub.

What’s new is the possibility of using a stylus, the one sold by Kobo for $ 49.99, which allows you to take notes in read books or jot down diagrams and drawings on blank documents. We were unable to try this option because supply issues prevented Kobo from sending us a stylus. The same reason was given for the case sold for $ 59.99, which automatically puts the e-reader to sleep.

The battery life gave us some concerns. We got a week in November: even though the e-reader was on standby, it seemed to be discharging. It had to be turned off completely so as not to empty the battery, which is tedious since the e-reader then takes a good minute to wake up. An update in early December seemed to alleviate the problem, giving us roughly three weeks of battery life, which is still sub-par for an e-reader.

One of the great advantages of Kobos, the ability to read books borrowed from the public library, is now less easy. This requires the use of external software, Adobe Digital Edition (ADE), of which the most recent versions 4 no longer allow this much appreciated function. The only solution, and it is not accessible to recent Mac owners, is to keep or find ADE version 3.0 on the web. Kobo and Adobe are passing the buck on this issue. The other solution, and we cannot recommend it in Press, is to break the DRM protections of books borrowed from the library.

Despite its few flaws, the Kobo Sage is in our opinion the best e-reader on the market, which has also been restricted to two main manufacturers, the other being Amazon. Its compatibility with popular formats, customization possibilities, blue light filter and improved capabilities make it a worthy successor to the Kobo Forma.

If you’re part of the cult that appreciates e-readers, those little devices that don’t annoy you with notifications and are all about books, the Kobo Sage is your best bet.