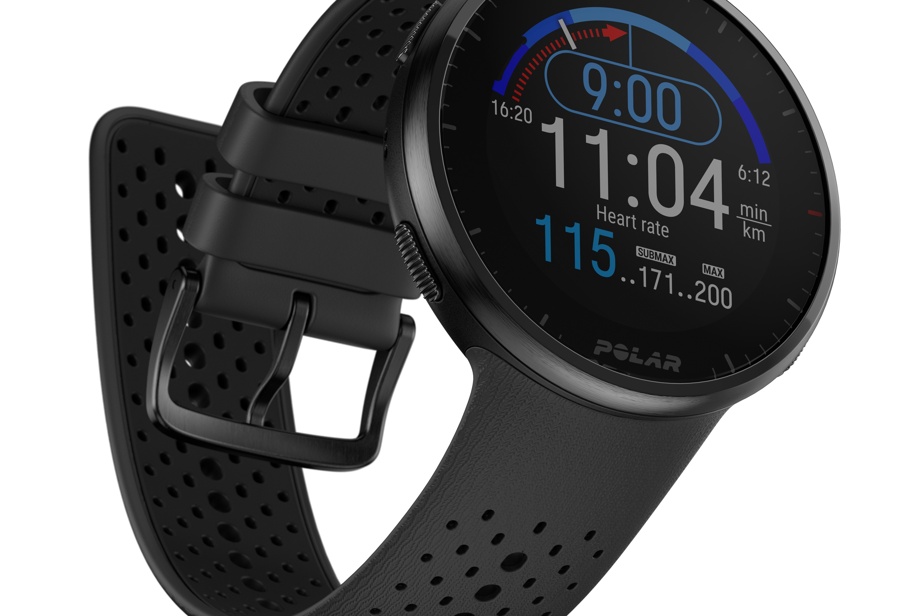 The all-new Pacer Pro essentially takes over the features of more expensive sports watches, including GPS, barometer, and every fitness test imaginable, while still being relatively affordable. But like any Polar, its complexity and messy interface are intimidating for the beginner.

At first glance, the Pacer Pro looks like many previous models from the manufacturer Polar. Same all-round and fairly bulky 45 mm diameter screen, same sobriety in the proposed dials which all revolve around sports performance, and an exceptional battery life of around a week.

It’s like having a Vintage M2 on your wrist, but some new things are appearing quickly. The Pacer Pro is lighter, barely 40 g, and it has been equipped with a processor twice as powerful as that of its predecessor, for 5 MB of RAM. It is indeed faster, but here we are very, very far from the 1 GB offered by an Apple Watch, which quickly closes the debate on the “intelligence” of this Polar watch: its domain is monitoring of sports activities, with some complementary software additions.

It can do things like show notifications from your phone and vibrate, show the weather, and even act as a stopwatch and timer if you’re brave enough to dive into the submenus. But that is clearly not its strength.

It is well equipped, this Pacer Pro, to be the ideal trainer, especially for running, but also for nearly 200 sports activities as varied as kickboxing, handball and swimming in all its forms. It is rated WR50, i.e. water resistant to a depth of 50m, but is not considered a watch for diving. You can choose shortcuts for 20 of these activities and configure the screen that is best suited, choosing up to 8 data among the hundred offered. Don’t be horrified, you are offered by default the dial that seems best suited, which you can then customize to your liking.

Without much originality, running and cycling were our activities for testing the Pacer Pro. We first note that the brightness of the screen, all in color, has been considerably improved and allows you to see the data well, even in direct sunlight. The display isn’t AMOLED like high-end smartwatches, but has a nice resolution.

The result, especially during a race, is that we have clear indications on the wrist of the state of our session, with well-arranged data. A good note once again in the Polar way of presenting the heart rate, at the top of the screen in an arc, from green to red depending on the intensity of the effort.

The Pacer Pro has a built-in GPS and barometer that makes it technically independent of a phone, something long-distance runners will appreciate. It then spits out all its data by synchronizing itself to give the results of the race or the bike ride, with a geographical map, effort zones according to heart rate, gradient, duration and rhythm.

The other great specialty of Polar that we obviously find in the Pacer Pro, are all the physical tests that are offered, from VO2 max to recovery capacity and the quality of your sleep. The Pacer Pro notably offers an evaluation program consisting of a fairly intense course, running, allowing it to judge your athletic abilities. These evaluations are based in particular on an improved heart rate reader, made up of 10 LEDs and 4 photodetectors capturing the light returned by the blood vessels.

This paraphernalia retails for $449.99, which is significantly cheaper than high-end sports watches with such features.

Finally, the syncing issues we’ve had from time to time with other Polar watches are totally gone. The engineers of the Finnish firm have done their job in this regard.

We’re probably on the tenth Polar we’ve tested, and the five-button submenu navigation is just as mysterious as ever. Where we believe to return to the home screen, we rather lock the watch or start a workout.

We had to trim some functions compared to more expensive watches like the Grit X. The main one is that the screen is not touch-sensitive. The Pacer Pro does not emit audible alerts and cannot display a set of data such as elevation, compass and coordinates in a dashboard.

The Pacer Pro won’t compete with an Apple Watch or Galaxy Watch as a do-it-all smartwatch. Nor does she have their elegance. On the other hand, for the sportsman who wishes to have complete reports of his training or his races, this watch does an impeccable job and benefits from the expertise of four decades of Polar.

The beginner is likely to find that this watch far exceeds their needs. Perhaps it will have the effect of pushing it to another level, as these watches often tend to do.