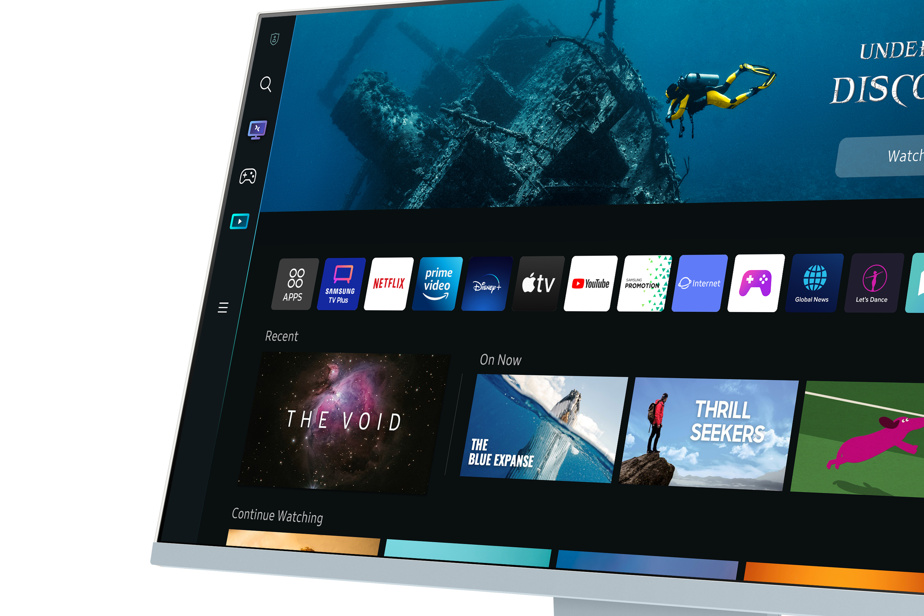 Samsung’s M8 is more like a smart TV, with its streaming apps and remote control, than a classic monitor. But thanks to its 4K resolution, webcam, and multiple connections, it does that job well, too.

With Samsung, there is no question of the relevance of the many features of its devices. They are there because the South Korean manufacturer and main supplier to other manufacturers has the technological capacity, period.

The M8 smart monitor is the perfect illustration of this: we thought we were testing a monitor, we end up with a technological fanfare where almost everything that was possible to include is offered. This 32-inch screen, barely 11.4 mm thick, is labeled 4K with its resolution of 3840 by 2160 pixels in 16: 9 format. The brightness of 400 nits, its contrast ratio of 3000: 1 and its 1 .07 billion colors make it a pleasant working companion, with a sharp and rich image.

On the upper part, a Samsung Slim Fit webcam has been added, with integrated connection, capable of providing Full HD resolution at 1080 p and videos at 30 fps. To connect it to the computer, you have the choice between a Micro HDMI input and a USB-C, the latter can also provide up to 65 watts to charge your device. A second USB-C input is available for connecting peripherals.

So far, we are dealing with a good quality monitor. But now, this M8 comes with a remote control that transforms it into a Samsung smart TV, using its Tizen operating system and therefore having its application store. Without competing with Roku’s 5,000 internet channels, the most popular, from Netflix to Apple TV+ via Plex and Spotify, are there. All that’s missing is the coaxial cable input to make it a complete TV.

The M8 is also AirPlay compatible, accepts Android screen mirroring and Samsung devices with SamsungDeX. It is also possible, in addition to the USB-C connection, to reproduce the screen of a PC or Mac computer by a wireless connection.

You can connect a gamepad to it via Bluetooth and have fun on all cloud computing platforms such as Xbox Cloud Gaming, Stadia and Nvidia’s GeForce. We tested the former with success and got a smooth, glitch-free and pixel-free experience with Fortnite.

Small addition to blur the two worlds even more: we have access to a Multi View mode which allows you to display two contents at the same time, for example your computer and the match in progress on SportsNet.

The M8 also includes a SmartThings integrator that can control all Zigbee devices and integrates Alexa and Bixby voice assistants. The M8 then controls all the home automation devices in the house and displays, when Alexa is called, additional information on the screen or the installed applications.

The reproduction of a computer screen on the monitor using the wireless connection is of poor quality, probably sufficient for a presentation, but certainly not for working.

The two 5-watt speakers do an honest job, nothing more.

The webcam is placed so high and so far that we only occupied a quarter of the image during videoconferences. And Samsung’s touted “face tracking” and “autozoom” never worked, and that’s not for lack of digging into the settings to turn them on.

Plugging the keyboard and mouse directly into the monitor caused delays, especially when it came to waking up the sleeping computer. We preferred to return to the direct connection to the computer.

This intelligent monitor is aimed at a class of users that is undoubtedly numerous, but of which, admission here, we are not part: those who will watch their films and their shows on their computer or on a second monitor. For those, the M8 is an ingenious hybrid that allows you to quickly switch from work to leisure or from the computer to your favorite series with a flick of the zappette.

There is of course something a little paradoxical about making a monitor smart, when that peripheral is already connected to the most intelligent and complete device available in a home, a computer. But it can be interesting to have almost everything on your monitor without having to open the computer. Some will like it.