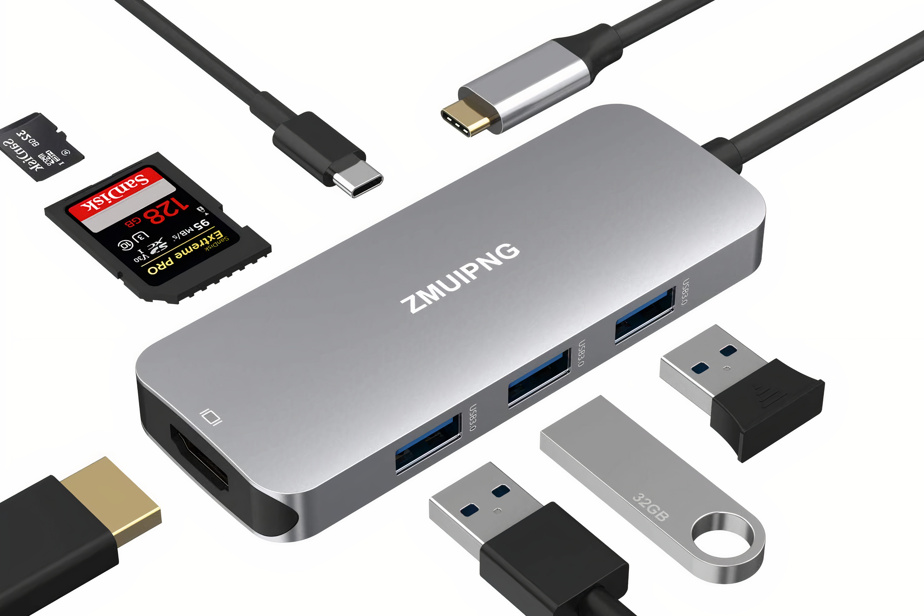 For an unbeatable price, the ZMUIPNG 7-port USB-C adapter multiplies the possibilities of connecting your computer to a monitor, memory cards or good old USB-A peripherals. A few months of testing, however, showed us that the offer was too good to be true.

We don’t talk enough about the importance in 2022 of USB adapters, also called hubs or hubs. With the ever-decreasing number of ports on laptops, and the generalization of USB-C inputs when using USB-A peripherals, these small devices are practically essential.

So here is what turns out to be a promising offer, the 7-port USB-C adapter from the Chinese firm ZMUIPNG, whose products can be found everywhere online and specifically at Walmart in stores. First caveat: an adapter is by definition an interface between many different devices. We multiplied the tests, alternating for example between a MacBook Pro 2020, a MacBook Air M1 and an ASUS ROG GL703, three monitors and two keyboards. Some combinations worked well, others didn’t, but it’s obviously impossible to predict them all.

As its name suggests, this adapter plugs into a USB-C port on your computer to multiply it by seven. First, you can plug in a USB-C power supply that can go up to 100 W, recharging from the same blow your laptop. It also acts as a reader for SD and Micro SD cards, with a transfer speed of 104 MB/s.

These two functions, the ZMUIPNG adapter has assumed for four months without any bugs.

On one side, there are three USB-A 3.0 inputs, capable of transferring data from an external hard drive at up to 5 Gb/s, if that drive is capable of delivering that much. You can also connect all keyboards, mice, USB keys and peripherals that still have a USB-A socket, which still represents the majority.

Finally, the adapter has a 4K HDMI output that allows you to connect your computer to a monitor. We got an output of 3440 x 1440 on a Huawei MateView GT monitor at a refresh rate of 50Hz. The theoretical maximum we got on an LG CX OLED TV is 3840 x 2160 with a refresh rate of 30 Hz.

For the first few weeks, everything went smoothly. Monitors, keyboards, mouse, and computer charging performed flawlessly. For such a versatile adapter that retails for $35.99 online, this is apparently a steal. Adapters to simply connect an HDMI monitor to a USB-C input often cost more.

Different bugs appeared gradually. When a computer resumed from its sleep state, the monitors had difficulty reconnecting. For one of the combinations, the Huawei monitor and the MacBook Air M1, a repetitive and annoying little noise of error appeared, until the adapter was unplugged and then plugged back in.

It was an opportunity to discover an incongruity, which computer technicians surely know: connecting a monitor via HDMI can cause an astonishing loss of quality. By connecting our monitor directly to the computer via USB-C, we reached its maximum refresh rate at 100Hz while maintaining the maximum resolution. Obvious lesson: favor the USB-C connection when possible.

One morning out of three, the Apple Magic Keyboard (connected to USB-A, even if it is Bluetooth compatible) no longer responded. Again, unplugging it and plugging it back in solved the problem.

Over time, we discovered that one of the adapter’s three USB-A ports was unreliable. We had to plug in our peripherals two or three times for them to be detected.

Finally, a bad sign: the Fakespot review service gave this adapter a C rating on Amazon. Which means we’re dealing with a mixture of reliable and unreliable reviews.

With the astronomical number of peripheral models, computers and monitors on the market, you may find the right combination for this ZMUIPNG adapter.

But in our case, we found too many irritants to make it a recommendable purchase.

These bugs have also disappeared since we installed an adapter from another manufacturer in early April. No miracle here: it costs twice as much. Another review to come.