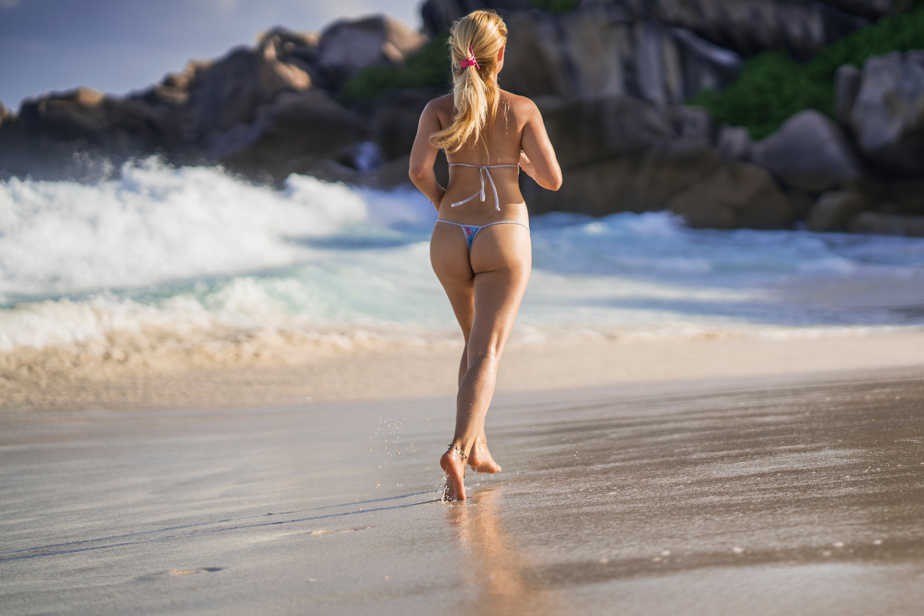 (Paris) After the withdrawal into oneself born of the health crisis and post-#metoo modesty, the ultra sexy is back on the red carpet and at the Salon international de la lingerie in Paris with its ultimate incarnation: the thong.

Rihanna, pregnant, in a transparent babydoll over a black thong at the Dior show in Paris this winter, actress Megan Fox wearing a white thong under a transparent Mugler dress at the MTV Music Awards in 2021…: celebrities are setting the tone.

And the lingerie brands follow, deploying in abundance strings, indentations, games of transparency, for underwear that can also be worn outside, as seen at the International Salon of Lingerie which is held until Monday in Paris.

The opportunity for the French brand Chantelle known for its comfortable products to launch a new Chantelle X line dedicated to ultra-sexy.

“It is a trend that we see a lot in pop culture. Rihanna, Cardi B, Kim Kardashian have seized on these codes in a very extroverted way and with a real feminist dimension. Our goal is to support this movement” with high-end products, explains Renaud Cambuzat, creative and image director for Chantelle, to AFP.

Unveiled on Instagram, this uninhibited sexy is “adopted for personal use by younger and middle-aged generations. I see it in the schools where I teach,” Jacqueline Quinn, designer and professor at the Fashion Institute of Technology in New York, told AFP.

Diversity is at the center of advertising campaigns that now rely on models with different morphologies and ages.

Like Victoria’s Secret, which abandoned its slogan A perfect body, embodied by supermodels (the “Angels” of the brand) in favor of rounder models and strong personalities, such as footballer Megan Rapinoe, LGBT muse .

Despite a different relationship to the body in Europe and the United States, the phenomenon is “internationalizing” thanks to social networks, which was not the case for previous generations, notes Renaud Cambuzat.

“Four-five years ago, we were in #metoo, there was the desire to flee to something perceived as more respectful. The #metoo fight is not completely won, however the fields have opened up. There are women and brands that are legitimate to reinvest in the territory” of committed ultrasexy, he believes.

“Do not confuse #metoo with puritanism. A woman may also wish to seduce, out of her own conviction, ”said Samar Vignals, from Aubade, long known for his black and white campaigns showing buttocks and necklines, to AFP. Today, the French brand shows in its advertisements the faces of women, who look “sometimes straight into the lens”, for “a freed seduction”.

Ensuring that customers are demanding “more audacity” after “the need for comfort” linked to the pandemic, Aubade is exploring a new sensuality by working on the back and multiplying the cutouts and games of transparency.

But “the string or the tanga, it is our best sale in the form of the bottom”, underlines Samar Vignals.

“We are witnessing the return of the scruffy sexuality of the 2000s, codes that refer to the archetype of the woman-object, but which no longer have the same meaning […] It is no longer an injunction to seduction, but a feminist reappropriation of sexualized clothing,” emphasizes Benjamin Simmenauer, philosopher and professor at the French Fashion Institute.

“We talk a lot more about self-acceptance, of one’s body. […] Seduction is a great feminist asset, in this tendency to regain control over one’s body and by extension over one’s mind”.