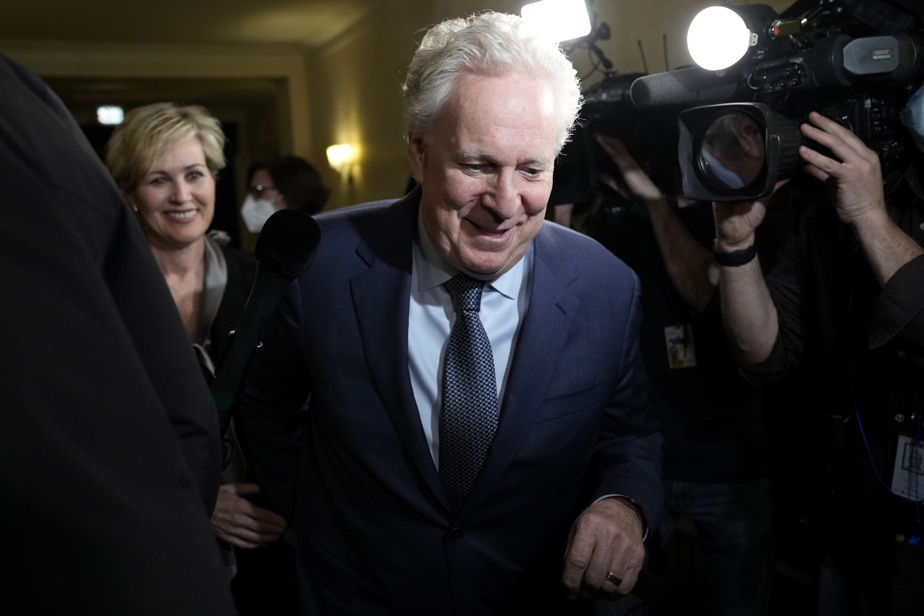 (Ottawa) Several Conservatives said they were impressed by the charisma of Jean Charest when they left a closed-door meeting with the former Quebec premier on Wednesday evening. About forty deputies and senators came to a hotel in downtown Ottawa to talk with him in anticipation of their party’s leadership race. The choice of the new chef will be known on September 10.

Mr. Charest was waiting to know the terms and conditions before formalizing his candidacy. “We’ll make the decision when we know the rules,” he said in a scrum upon his arrival, visibly amused by all the attention he received from the Ottawa parliamentary press. “We are not there yet, but the day is approaching. The rules were announced a few hours later, at the end of the evening.

The event was organized, among others, by Quebec MP Alain Rayes who encouraged Mr. Charest to get started. Deputies and senators from all provinces have been invited. The one whose political career spans 28 years approached them and took the time to answer their questions behind closed doors.

“He still has the sacred fire! exclaimed Saskatchewan MP Kevin Waugh as he left the room. “He led this party when he had only two MPs, so he knows the song, and we’ll see if he can come back and be the person we’re looking for. He said he was satisfied with Mr. Charest’s answers on the development of fossil fuels.

“Mr. Charest is very inspiring and, frankly, I think that’s what we need right now,” said Nova Scotia MP Stephen Ellis. However, he is waiting to know all the candidates who will enter the race before deciding whether he will support him or not.

“It will be interesting to see what people think when he comes to Western Canada,” said Alberta MP Mike Lake.

The former prime minister did not answer questions from journalists after leaving the meeting. Upon his arrival, he had not indicated precisely the subjects he intended to address, but had nevertheless given a hint of his vision of the party in the press scrum.

“A subject on which, I think, we will all agree, is the importance, it is the responsibility of the Conservative Party of Canada towards the country because we need parties that are national in scope . It is absolutely essential,” he said.

It means a political party that is faithful to its history, that represents each region of Canada and that presents a vision that is very inclusive of Canada.

Jean Charest, on his vision of the Conservative Party

If several Conservatives who were present at the meeting believe that Mr. Charest could rally the troops, the same is not true of his only declared opponent to date. Pierre Poilievre’s team attacked the ex-prime minister on Twitter.

Alberta MP Shannon Stubbs compared Mr. Charest, who led the Quebec Liberal Party for 14 years, to Prime Minister Justin Trudeau. She accuses him of having introduced “a carbon tax” in Quebec, of having supported the firearms registry and of having increased the Quebec sales tax by 2% during his mandate. “Our leader must share our values ​​and respect our policies,” she wrote.

A new chef in September

Conservative activists will choose their new leader on September 10, the rules-drafting committee ruled on Wednesday evening to mark Erin O’Toole’s succession, a deadline comparable to the previous race which started in January 2020 and which was originally due to end at the end of June.

The Charest clan feared that the deadline for registering new members would come in mid-May; the rules give her some oxygen. Until June 3, the organizers will be able to sell membership cards to be able to vote at the congress. In the following weeks, the office will verify the admissibility of new members.

“As a party with a long tradition of grassroots engagement, these dates will allow as many people as possible to join the Conservative Party and participate in the election of our next leader,” said Ian Brodie, chair of the committee on the preparation of the rules of the congress. This schedule will allow Conservative MPs to return to the House of Commons in the fall with their new leader, he said.

No more obstacles in front of Charest?

Candidates will have until April 19 to declare themselves in the running and, as in 2020, they will have to pay an entry fee of $200,000, in addition to a refundable “compliance” deposit of $100,000. In 2020, the race had started at the beginning of January. Scheer’s successor was expected to be chosen on June 27, but due to the pandemic, that deadline had been postponed.

Nothing seems to stand in the way of Jean Charest’s candidacy anymore. If he in turn embarked on the leadership race, it would be a return to federal politics for him since he led the Progressive Conservative Party during the 1990s before making the jump to Quebec politics. . He also campaigned for the No side in the 1995 referendum.

On Monday, the Permanent Anti-Corruption Unit closed the Mâchurer investigation into the financing of the Liberal Party of Quebec at the time when the party was led by Mr. Charest, after eight years of unsuccessful proceedings. This is therefore one less obstacle for his candidacy for the leadership of the Conservative Party.