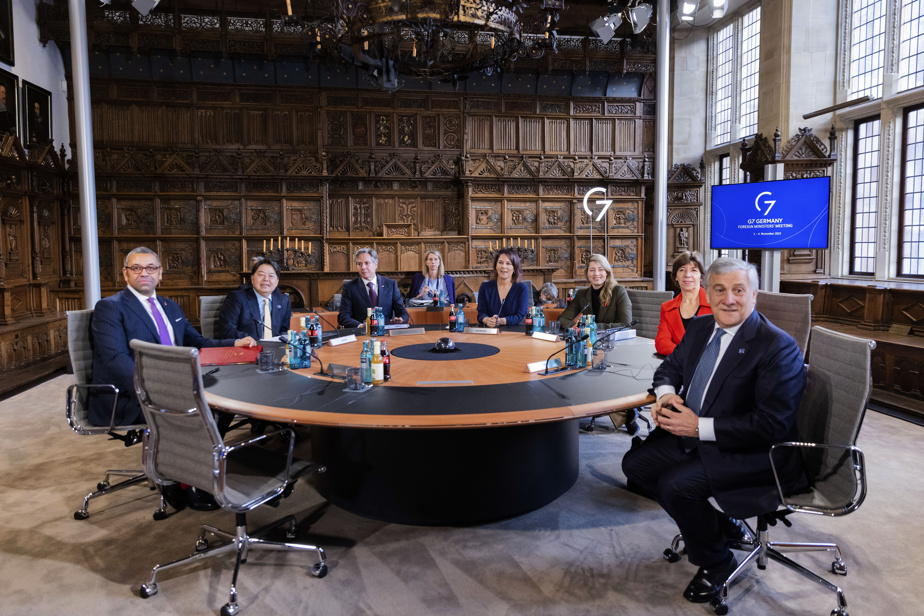 (Münster) Meeting in Germany on Friday, the G7 displayed a united front despite nuances on China in particular, assuring Ukraine of its “unshakable” support for Russia, denouncing the escalation in North Korea and the repression of protests in Iran.

“A remarkable degree of unity on virtually all issues,” said a senior US diplomat, speaking on condition of anonymity, shortly before the plenary adoption of a final communiqué from the two-day meeting of ministers of foreign affairs. Group Foreign Affairs in Münster (West), Germany.

Strong in symbol, the meeting was held in the same room of the Rathaus (town hall) where the Treaty of Westphalia was signed in 1648 which had redesigned Europe.

In their declaration, the heads of diplomacy of the seven industrialized countries notably agreed to set up “a coordination mechanism” in order to help Ukraine to “repair and defend” its essential electricity and electricity supply infrastructure. water pounded in recent weeks by Russia.

It will also be a question of delivering “water pumps, heating appliances, housing and sanitary containers, beds, blankets, tents”, explained the day before the head of German diplomacy Annalena Baerbock, whose country holds the presidency of the G7.

“We reiterate our unwavering commitment to continue to provide the financial, humanitarian, political, technical and defense support that Ukraine […] needs, said the ministers.

This declaration of unity was expected, in the context of recent changes of government in Italy and the United Kingdom in particular, to ensure that the group remains on the same wavelength.

“We will help them to conclude this conflict victoriously for as long as it takes”, summed up the Briton James Cleverly in an interview with AFP, while his Ukrainian counterpart Dmytro Kouleba had intervened the day before at the meeting by video conference.

Worried about the energy crisis, the group also called on oil-producing countries to increase their production to help bring down prices, a month after OPEC+’s decision to drastically reduce its black gold extractions.

Targeting North Korea and Iran, the ministers strongly condemned recent ballistic missile launches by Pyongyang amid a dramatic rise in tensions on the Korean Peninsula, and the crackdown on protests in Iran.

“Any nuclear test or other dangerous action will face a swift, robust and united international response,” they warned Pyongyang.

For the American diplomat quoted above, the G7 has demonstrated its “crucial role” in coordinating the action of rich countries in the face of the turbulence of this world, including on the delicate subject of China where the G7 has demonstrated, according to him. , of a “remarkable alignment of positions and approaches”.

Relations with China were invited to the meeting in full visit of German Chancellor Olaf Scholz in Beijing, seen with a rather bad eye in Paris, Brussels or Washington.

The Chancellor pleaded on Friday for “more” cooperation with China, but also “fair” trade relations, in a climate of growing distrust from the West vis-à-vis the second world power.

Referring to China in their final communiqué in a carefully calibrated manner, the G7 countries said they were ready for “constructive cooperation where possible and in our interest” with Beijing, at the same time partner, competitor and rival, like the underlined Thursday evening the German minister.

At the same time, they called on Beijing “to respect its international obligations” and human rights, and to “refrain from threats or intimidation”, in an allusion to Taiwan.

“We strongly oppose any unilateral attempt to change the status quo by force or coercion,” they said.

The ministers concluded the meeting by focusing on relations with the African continent, in the presence of their Kenyan and Ghanaian counterparts.