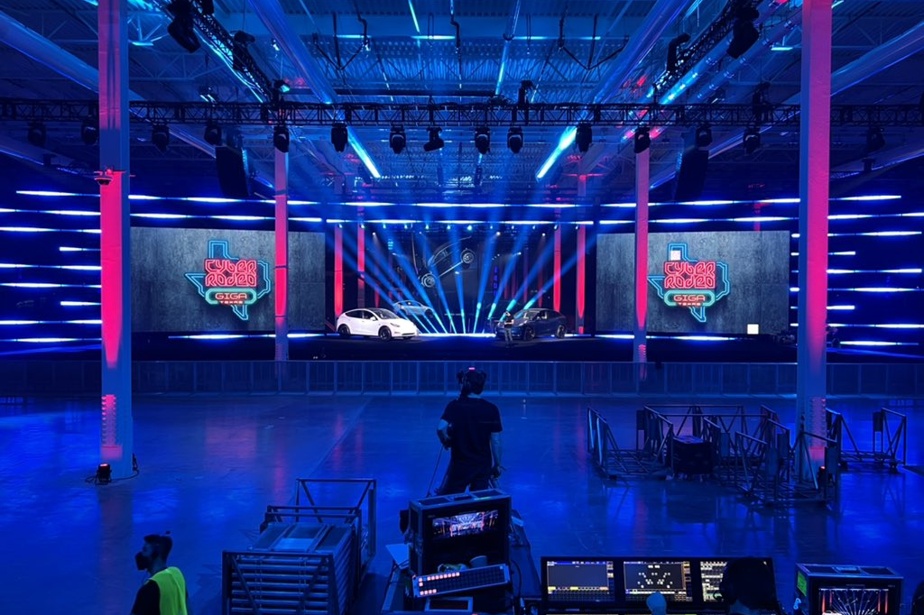 (Austin, San Francisco) Invitations by the thousands, a boss adored by his fans and extraordinary decor: the inauguration of the new Tesla factory in Austin on Thursday looks like a star concert, in the now established tradition of Elon Musk, the whimsical billionaire who celebrates the extraordinary growth of his company and his establishment in Texas, far from Californian culture.

The automaker’s founder and boss tweeted several photos of the preparations, including a psychedelic pentagon-shaped tunnel and Teslas on a stage framed in neon lights. He will deliver a speech around 9 p.m. (10 p.m. ET).

For several days, fans of the brand of high-end electric vehicles have been tweeting for him to claim tickets to the event, scheduled to accommodate up to 15,000 people.

“I found the golden ticket!” “Tweeted Luke Metzger, president of a Texas environmental NGO, on Wednesday, in reference to “Charlie and the chocolate factory”.

“Thank you Elon Musk! he added, along with a screenshot of his invite to the “Cyber ​​Rodeo-Giga Texas -1 Tesla Road, Austin, Texas.”

The company, very secretive, communicates little, but the information circulates through the back door.

“Big party for the opening of Tesla’s new home, which spans 74 acres and is worth $1.1 billion. Free interactive tours. Free barbecue. Open bar, ”said the WhenWhereWhatAustin Instagram account on Tuesday, which lists events in the Texas capital.

“It’s a great day for Texas,” said Courtlan Ross, an Austin native and real estate investor who is looking forward to rising property prices, thanks to the influx of tech companies in his state. .

The opening of the factory is a “good thing”, also believes Davis Galassini, a young analyst. “I’m more of an Elon Musk fan. And I think it will bring lots of jobs”.

Other residents, however, are concerned about the influx of Californian start-ups. “It’s very recent. Austin used to be a small provincial town, but it’s different now, it’s become huge,” remarks David Delarosa, a 28-year-old stay-at-home dad.

Like Oracle and Hewlett Packard Enterprise, which headed to Texas in 2020, Elon Musk moved Tesla headquarters to Austin in late 2021.

This state is known for its conservative policies-it made headlines recently for passing a particularly restrictive law on abortion-and for its tax incentives: there are no taxes on corporations, nor on income .

According to the Austin American-Statesman, Tesla received tax exemptions valued at more than $60 million to build its mega-factory, which is expected to eventually employ 10,000 people.

Texas is also synonymous with oil and big, polluting cars. “I think Elon Musk is having a bit of an identity crisis. He forgot who his clients were,” comments independent analyst Rob Enderle.

But the South African entrepreneur, who has become the richest man in the world, has trouble with California and Silicon Valley, where he founded Tesla in 2003.

In February, the state Democrat filed a lawsuit against the Fremont plant for racial discrimination. The site is also known for failed unionization attempts.

And in May 2020, at the start of the pandemic, when the authorities refused to immediately reopen this same factory because of health measures, Elon Musk challenged them to come and “stop” him.

The county of Hidalgo, in the south of Texas, had jumped at the chance, by offering to come and set up its activities on its territory. But it is that of Travis, in the suburbs of attractive-and Democratic-Austin, who won the favor of the very courted businessman.

“Giga Texas”, whose surface is equivalent to a hundred football fields, has been in operation since the end of 2021.

It is Tesla’s fifth “mega-factory”, after those in Nevada, New York, Shanghai and Berlin – its first European site – which opened to much fanfare in March.

“Tesla has a rich man problem: demand is outstripping supply to the point that Model Ys and some Model 3s are shipping 5-6 months late in some parts of the world,” said analyst Dan Ives of Wedbush Securities. . “The solution lies mainly in Austin and Berlin.”

In the first quarter alone, and despite the shortage of electronic chips, Tesla delivered 67% more vehicles than for the same period in 2021, when Toyota and General Motors saw their sales fall by more than 20% in volume.