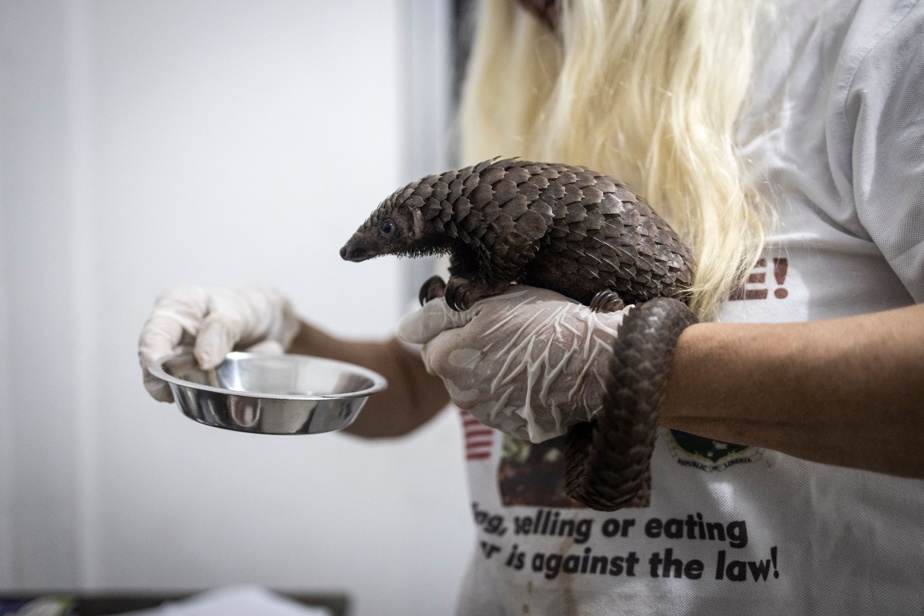 (gbarpolu county) At night, outside the rainy season (from May to October), armed with a single-barrel shotgun and a machete, Emmanuel goes hunting in the north of Liberia.

This is the time when the shy pangolin comes out to rummage in the dead wood in search of ants and termites.

About the size of a large nutria, the animal covered with scales, with small clawed legs, devoid of jaws and teeth, is also easier to flush out in the dark, he explains, because the light of the headlamp is reflected in his eyes.

Emmanuel, 58, grows plantains and peppers in a village in Gbarpolu district, five hours from the capital Monrovia by a bumpy track.

But it is by hunting that he earns money, the monkey and especially the pangolin. If his ten children were able to go to school, it is to his rifle that they owe it, he says.

The only scaly mammal, threatened with extinction on the whole planet, the animal is appreciated in Liberia for its sugar-tasting meat and for its scales, which are sought after in Asia where they are used for traditional medicine.

Since the main source of supply ceased to be Asia in 2013, due to declining numbers, Africa has become the main supplier, according to the United Nations Office on Drugs and Crime. Main origins: Nigeria, Cameroon, Guinea and Liberia.

Among the most poached in the world, the pangolin has been protected since 2016 in Liberia, a poor country in West Africa scarred by almost 14 years of civil war and the aftermath of the Ebola virus disease.

But for Emmanuel and many others in the remote villages of the rainforest that covers the north of the country, where AFP journalists were able to carry out a rare mission, poaching is as much a means of subsistence as a mode of life.

“We kill it, we eat it, summarizes Emmanuel for AFP. Afterwards, the scales, we sell them. »

The Convention on Trade in Endangered Species (Cites) in 2016 banned international trade in pangolins, some types of which are on the International Union for Conservation of Wildlife’s Red List of Threatened Species. nature (IUCN).

But the scales of this animal, present only in Africa and Asia, continue to feed a large world traffic.

China and Vietnam are in high demand because they are known to act on arthritis, ulcers, tumors and menstrual pain – virtues never scientifically established. A kilogram of scales sold for $355 in China in 2019, more than $700 in Laos in 2018, according to a study by the Hague-based Wildlife Justice Commission.

Tons of scales have been seized by customs officers around the world in recent years. In July, for example, China seized 2 tonnes.

For traffickers, Liberia is fertile ground.

And the demand is strong. “There are people who buy, that’s why we sell”, explains the chief hunter of a village, aged in his fifties.

Buyers scour poor villages with cob walls and tin roofs on the edge of thick forests, say poachers whose names are withheld for reasons of confidentiality.

Locally, it is said that it is about Liberians who would provide intermediaries in Monrovia. The path of the goods then darkens.

Last year, hardly any were sold. Perhaps because the COVID-19 pandemic, of which the pangolin was for a time suspected to be the vehicle, slowed down trading.

In 2020, Beijing banned the trade and consumption of wild animals and removed pangolin ingredients from the official list of Chinese pharmacopoeia. And Hong Kong, a hub for the international trade in endangered animal species, particularly because of its port, last August made wildlife trafficking an organized crime.

A young man still says he has managed to sell scales in recent months. According to various sources familiar with the rates, a small bag of scales from several pangolins fetches a few US dollars.

Considering the standard of living locally, it is already that in this country where 44% of the inhabitants live with less than 1.9 dollars per day according to the World Bank. The money is used to buy basic necessities like soap, the same sources say.

Even when the traffic slackens, the villagers flush out the pangolin for its meat.

In one of the villages visited by AFP, a woman comes out of her house with a baby pangolin clinging to her. Her husband found the baby with his mother two days earlier. What happened to the mother? “We ate it right away,” she laughs.

Near Monrovia’s Rally Market, a park ranger spills fuel on a pile of confiscated meat that day after a hard descent and strikes a match. In the brazier are burning the corpses of monkeys and at least one pangolin.

Around, women have gathered and it’s almost a riot. Comfort Saah is mad with rage: it’s the equivalent of 3000 dollars gone up in smoke, she says. A fortune by the standards of the country. “How am I going to send my children to school? How am I going to live,” she laments.

Since the animal is protected in Liberia, hunting and marketing it is punishable by a fine of 5000 USD and up to six months in prison.

After years of trying to raise public awareness, the forest services have only just launched punchy operations.

“Every day, poachers and hunters kill our protected species” for a trade that “annihilates our natural heritage”, notes Edward Appleton, who heads the unit against trafficking within the forest authority.

But it comes up against the utilitarian conception of animals and old consumption habits in rural areas, where there are few signs that the ban on poaching is being applied with vigor.

Pangolin scales can be found almost everywhere in the three villages of Gbarpolu district visited by the AFP team. Many villagers hide them at home in more or less full plastic bags.

Nearly 900,000 pangolins were sold illegally around the world between 2000 and 2019, the NGO Traffic, which monitors illegal animal trafficking circuits, said a year ago.

Its overall numbers in the wild, however, remain a mystery, experts say.

But the little data available is enough to fear a sharp regression. The number of people killed has “really, really increased” in recent years, worries Phillip Tem Dia, a Liberia specialist with the London-based NGO Flora and Fauna International (FFI).

According to the US Development Agency USAID between 650,000 and 8.5 million pangolins were taken from their environment between 2009 and 2020 across West Africa.

For Matthew Shirley, co-chair of the pangolins group at the IUCN, it is “totally unrealistic” to expect poor people to give up such a rich source of protein. The focus should be on conservation, he says.

But the fact that the pangolin is a solitary animal, reclusive, difficult to feed and quickly stressed complicates the efforts.

At the Libassa Wildlife Sanctuary, opened in 2017 near Monrovia, we collect wild animals confiscated from their owners who had kept them as pets or destined them for slaughter.

And we try to return them to nature or, when that is not possible, to take care of them until their death.

But many pangolins die of stress in captivity, despite the care provided, explains the director of the center, the Belgian Julie Vanassche. “They are very sensitive animals.”

The institution, the only one in Liberia to come to the rescue of pangolins, released 42 of them into the wild. A drop in the ocean of conservation. “We have to act quickly, it’s almost the end”, loose Mme Vanassche.