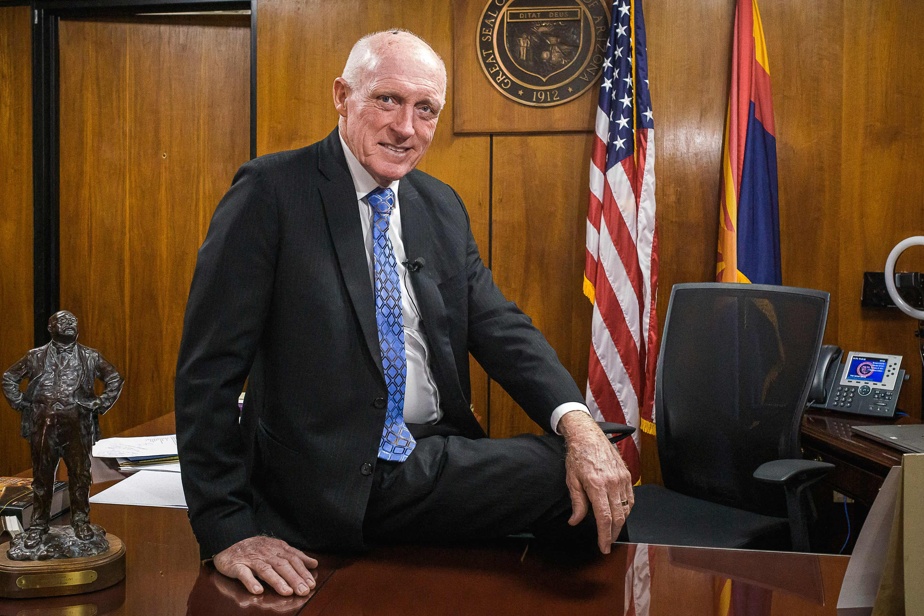 (Phoenix) After 30 years in the service of the Republican Party, Russell “Rusty” Bowers has rarely been so worried: in his native Arizona, the midterm elections are tarnished by the presence of armed lookouts at some polling places and conspiracy from his own side.

In the Grand Canyon region, “civilization is hanging by a thread”, alarmed the speaker of the State House of Representatives to AFP, almost sticking his thumb and index finger together to symbolize what he believes separates American society from perdition.

Sidelined by the “Grand Old Party” (GOP) after resisting pressure from Donald Trump to overturn the results of the 2020 presidential election, won by Joe Biden by just 10,000 votes in Arizona, this conservative Mormon denounces the “lies” of his political family.

In this southwestern state, the three Republican candidates for the posts of governor, senator and secretary of state continue to claim that President Biden is illegitimate, despite multiple investigations having concluded that there was no fraud.

And the new Trumpist guard is trying to reform the electoral system with a “dangerous law”, underlines this 70-year-old political veteran.

On the eve of the midterm elections, the climate is so poisonous that certain metal ballot boxes – similar to mailboxes – where Arizonans can deposit their ballot in advance of the ballot on November 8 are now monitored by anonymous lookouts. In Mesa, where Mr Bowers lives, two gunmen in paramilitary gear were evacuated by the sheriff.

“It’s intimidation, regardless of its degree, regardless of the legal protection” which authorizes the carrying of weapons in Arizona, he is indignant, recalling that the boxes are already video-monitored “24 hours a day. 24”.

The current political atmosphere makes him shudder. “If you confiscate the vote or weaken it, and increase the violence, that gives fertile ground for fascism,” he warns.

In Arizona, “the strength of the current leadership of the party is based solely on popular anger”, he insists, denouncing the Trumpist wing of the GOP which “is approaching a Mussolini model”.

For two years, Mr. Bowers has been a personal victim of America’s ever-increasing polarization. His inbox is full of thousands of abusive emails and death threats since Donald Trump took a dislike to him.

The ex-president called him a “cowardly RINO”, an acronym used to cast shame on those who he considers to be “republican only in name”, when the parliamentarian testified to the pressure exerted on him to distort the presidential election, before the commission of inquiry into the assault on the Capitol, on January 6, 2021 in Washington.

For weeks, Trumpists have regularly demonstrated outside his windows, sometimes with signs inspired by the QAnon conspiracy theory accusing him of being a pedophile. The septuagenarian also had to repel a member of a far-right militia, planted in front of his home with a gun in his belt.

Despite this, this sculptor father of seven children, fervent opponent of the right to abortion, regrets nothing. He smiles again as he remembers the call that started it all.

At the end of the line, Donald Trump and his lawyer Rudy Giuliani assured him that an old Arizona law – which he never found – allowed the Republican Assembly to change the state’s electors, responsible for to formally elect the president after the ballot, in defiance of the popular vote.

“I said to him, ‘Mr. Trump, I voted for you, I walked for you, I campaigned for you, […] but I won’t do anything illegal for you,” says this very pious Mormon. “When they asked me to break my oath to the Constitution, it was like asking me to renounce my religion, my faith, the foundations of who I am. »

Disgraced, Mr. Bowers lost the Republican primary to run for a seat in the Arizona Senate in the November election.

Before leaving his post, he used his prerogatives as Speaker of the Assembly to oppose a Republican bill in February that would have allowed parliamentarians to “power to reject the election” in Arizona after it was held.

“I stopped it… for this year”, he underlines in a silence which says a lot about the stakes of this mid-term election.