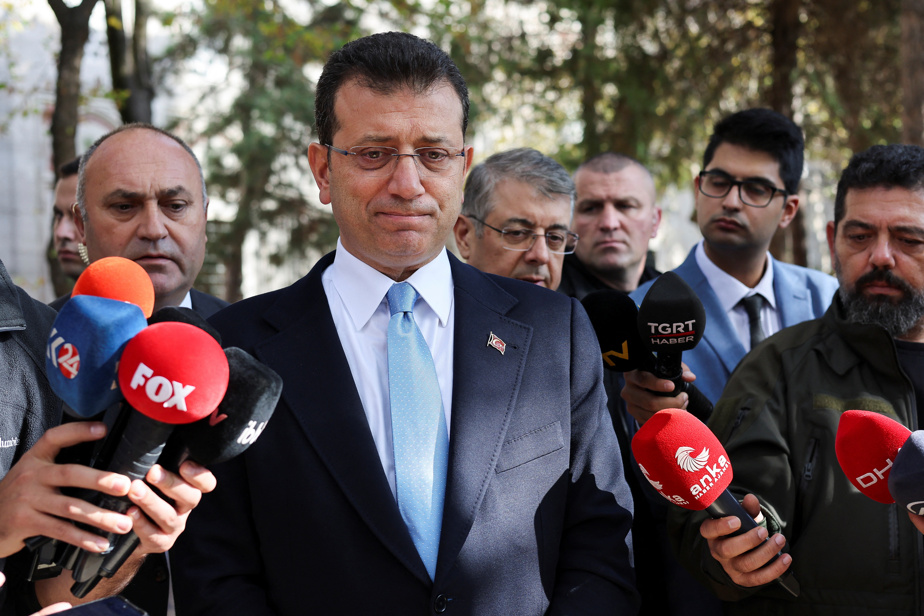 (Istanbul) Istanbul mayor Ekrem Imamoglu, a Turkish opposition figure, was sentenced on Wednesday to more than two years in prison for “insulting officials” and a political ban of the same duration, at six months of crucial elections in Turkey.

The appeal will be suspensive, he said, which means that Mr. Imamoglu will retain his mandate as mayor while his appeal is considered.

The verdict handed down by an Istanbul court adds to Mr. Imamoglu’s prison sentence a “deprivation of certain rights”, including that of eligibility, for the same duration as the prison sentence, the lawyers said.

“This trial sums up the situation in Turkey,” said Mr. Imamoglu in the evening, perched on the roof of a bus, facing thousands of people gathered in front of the town hall chanting “Long live freedom, Death to tyranny!” “, “Government, Resignation! or “Law, Law, Justice!” “.

“It started the day they tried to deprive us of our victory in the Istanbul (municipal) elections. But they will not succeed, ”he hammered.

The 52-year-old mayor is seen as a potential candidate for the June 2023 presidential election against head of state Recep Tayyip Erdogan.

Member of the CHP (social democrat), the main opposition party, he was accused of having described as “idiots” the members of the electoral college who had invalidated his election in March 2019, which earned him to be prosecuted in justice.

“I was only responding, by sending him his own words, to the Minister of the Interior who had called me an idiot,” said the city councilor.

Mr. Imamoglu has always professed his “confidence in Turkish justice” and denounced a “political affair”: “There can be no such judgment. It’s tragicomic, ”he said last month.

He found himself in the regime’s sights after he inflicted his most humiliating defeat on Mr. Erdogan’s party in March 2019, winning the mayoralty of Istanbul, which had been ruled for 25 years by the ruling AKP party.

His election was first canceled by the government, forced to bow three months later in the face of the mobilization of the electorate which offered a larger victory to the opponent.

The mayor of Istanbul is one of a handful of opposition leaders that the polls give winners against Mr. Erdogan, facing a serious economic crisis and official inflation of 85%.

“I am not only addressing Istanbul, but also Ankara, Izmir, Diyarbakir, Trabzon”, he warned on Wednesday evening, listing other cities that have passed into the hands of the opposition, whose elected officials have sometimes been excluded. by power: “To those who try to intimidate us: I am still young and I am still enthusiastic! he proclaimed, using the slogan in force at the time of his election.

For the founding director of the MetroPOLL Survey and Research Institute, Ozer Sencar, “this event can turn into a great opportunity for the opposition if it knows how to take advantage of it…”, he estimated on Twitter.

In the crowd, we approve: “I am here to support him and we will continue like this until the election of 2023”, assures Neslihan Oyku Sahin, a 23-year-old lawyer.

“They punished him to prevent him from being president, but he is the one the public loves and wants: I think he will collect the votes of all categories of society”, adds Firdevs Gulmez, housewife of 55 years.

The opposition alliance, made up of six parties including the CHP, has not yet nominated its common presidential candidate.

Traveling to Berlin, he brought forward his return to Turkey on Wednesday evening: before boarding the plane he denounced, in a video message posted on Twitter, “a massacre of the law” and “rotten justice”.

But while affirming his support for the leader of his party, Mr. Imamoglu assured Tuesday evening on the eve of the trial, in an interview with the television channel TV 100, that his “shoulders” were “capable of carrying all kinds of responsibilities “.