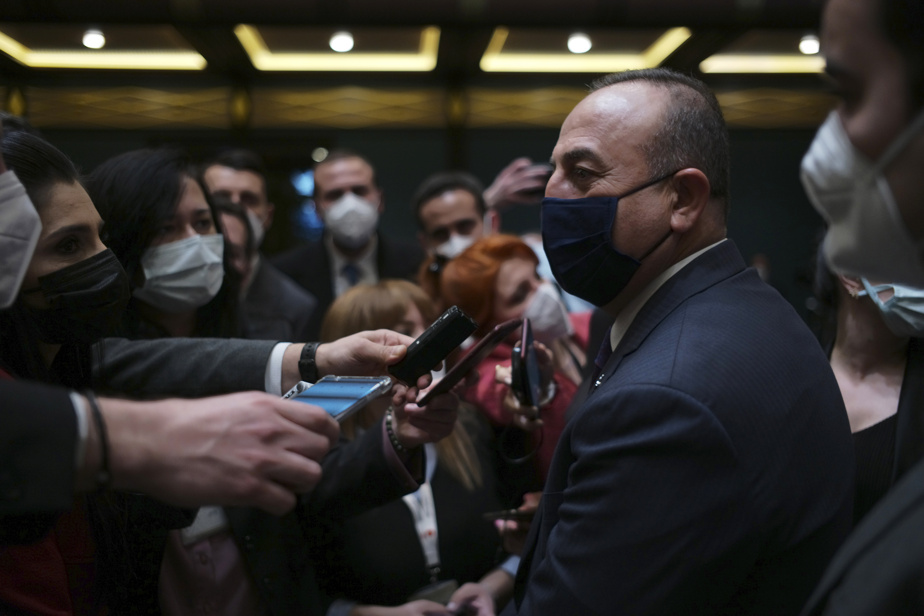 (Antalya) Turkey welcomes the Russian and Ukrainian foreign ministers on Thursday for their first face-to-face meeting since the start of the Russian offensive in Ukraine.

Serguei Lavrov and his Ukrainian counterpart Dmytro Kuleba will be received by Turkish Minister Mevlut Cavusoglu in Antalya, a seaside resort popular with Russian tourists.

Turkish President Recep Tayyip Erdogan, who has stepped up mediation efforts since the start of the crisis, argued on Wednesday that “Turkey can talk to both Ukraine and Russia”.

“We are working to prevent the crisis from turning into a tragedy,” he insisted.

The Turkish president is scheduled to speak by phone with his American counterpart Joe Biden at 10 a.m. (EST), the White House announced on Wednesday evening.

Ukraine and Russia agreed on Wednesday to a 12-hour ceasefire around a series of humanitarian corridors to evacuate civilians.

On Wednesday, Mr. Kuleba assured in a video on Facebook that he would do everything to make the “talks (be) as effective as possible” while confiding that he had “limited expectations”.

“I don’t have high hopes, but we will do everything to get the most out of it,” he said, saying “everything will depend on the instructions Lavrov receives before these talks.”

The atmosphere is likely to be tense, the Ukrainian minister having recently described on CNN his Russian counterpart as “contemporary Ribbentrop”, named after Hitler’s minister during the Second World War.

Antalya is Mr. Lavrov’s first outing from Russia, increasingly isolated by Western sanctions targeting it, since the start of the war on February 24.

He arrived in the Turkish seaside town early Wednesday evening.

The two ministers will be joined on Thursday by the Director General of the International Atomic Energy Agency (AEIA), for meetings to “progress on the urgent issue of safety and security” of Ukraine’s nuclear facilities, according to a Rafael Grossi’s tweet.

Turkey, a member of NATO, is an ally of Ukraine to which it supplies combat drones. While taking care to maintain its relations with Russia, on which its tourism and its wheat and energy supplies are closely dependent.

Before the planned phone call with Joe Biden, Mr. Erdogan had also spoken on the phone on Sunday with Russian President Vladimir Putin to demand a ceasefire.

The Antalya talks come as Russia on Wednesday reported “progress” in talks with Ukraine on the border with Belarus, according to the spokeswoman for Russian diplomacy.

Mme Zakharova also claimed that Russia was not seeking to “overthrow the government” of Ukraine.

Analysts, however, remain cautious as the war has already thrown more than two million Ukrainian refugees out of their country.

“Every effort can help, but I don’t think we should expect an immediate breakthrough” in the negotiations, Aaron Stein, director of the Middle East program at the Foreign Policy Research Institute, told AFP.

“To reach an agreement, both parties will have to make painful compromises,” also warns Berk Esen, of the German Institute for International and Security Affairs.

Mr. Erdogan can boast of having managed to organize this meeting “in neutral territory”, continues Soner Cagaptay, associate researcher at the Washington Institute who would say he is “really surprised” if Antalya reaches an agreement.

He recalls that other leaders have been involved in the file, including French President Emmanuel Macron and Israeli Prime Minister Naftali Bennett. Without result for the moment.

Ankara has stuck to a delicate balancing act between the two belligerents from the start and keeps the channels of discussion open.

“Don’t abandon Kyiv or Moscow” and “don’t give in on Turkey’s interests”, summed up Mr. Erdogan in the first days of the conflict, while denouncing an “unacceptable” invasion of Ukraine by Russia.

On the other hand, it has not joined Western sanctions, maintains its airspace and sea lanes open to Russia.

“This active neutrality has made it possible to put Turkey at the center of the diplomatic game”, believes Berk Esen.

Whatever the results of this meeting, it already constitutes “a major diplomatic success” for the Turkish government, which has been in trouble with Westerners in recent years, he adds.