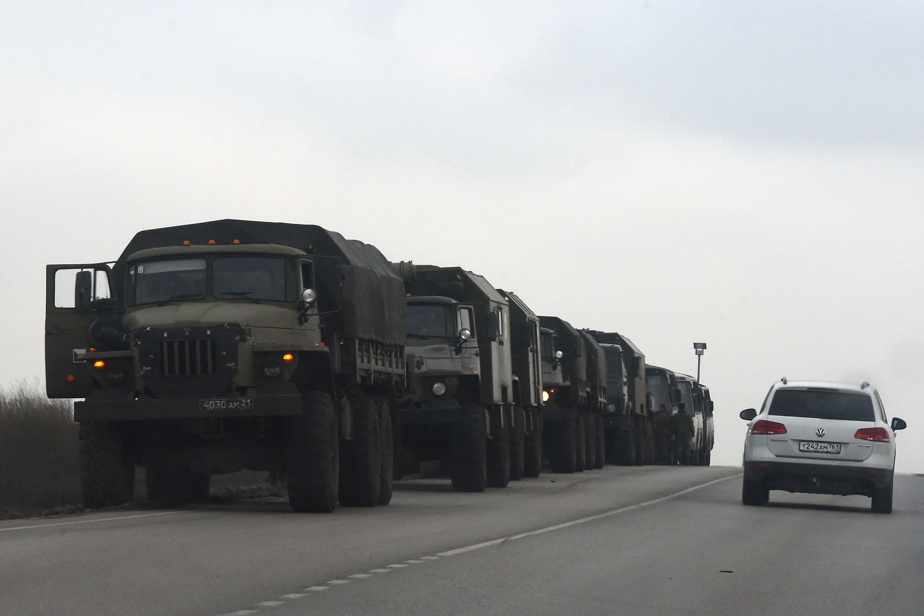 (Rostov region) At the Tchébouretchnaïa café, a few tens of kilometers from the border between Russia and the separatist territories of eastern Ukraine, a Russian soldier is taking a nap, in the ambient smell of frying.

“Thank you, we will be back! “Launches another soldier, unfolding his meter ninety after having swallowed his tchébourek, fried slipper at 65 rubles (1 Canadian dollar), with three comrades.

Suddenly, a soldier knocks on the door of the small room where the AFP team works, the only civilian customers in the place: “Do you want to buy a dry military ration? “.

Suddenly, soldiers running through the mud on the screen showing videos. But it’s not the Western-dreaded Russian invasion of Ukraine, just the video for the song. You’re in the army now, a hit from the 1980s.

In the village, the soldiers are everywhere, wearing camouflage caps or gray synthetic army hats. They hang out in the parking lot, smoking, drinking coffees, bustling about on imposing military vehicles, parked along the rails of the train for several hundred meters.

The Rostov region, bordering the self-proclaimed republics of eastern Ukraine, is shrouded in fog and silence reigns this Wednesday, February 23, a public holiday in Russia where we celebrate the “defenders of the fatherland”, the soviet army.

After the turmoil of the last few days, when the region was crossed by thousands of displaced people transported by the Russians from the separatist regions and by military convoys heading for the border, the atmosphere is one of expectation.

On a soccer field a few hundred meters away, ten men in their fifties, several of whom are veterans, exchange the ball, mismatched overalls stretched over their plump bellies.

Valéri Bélik, a 52-year-old retired policeman, wears a “No Fear” cap and acts as a goalkeeper.

“Of course, we are all worried about the Donetsk People’s Republic, about Lugansk. It’s a pity for the people who are suffering from terror, from the war that the Ukrainian authorities have unleashed,” he accuses, espousing the line of the Kremlin, which claims to have recognized the independence of the separatist territories to protect them from Ukrainian assaults denied by Kiev.

On the road heading towards the border, a bus is at a standstill, looking for a lost passenger. On board, they are not inhabitants of Donbass taking refuge in Russia.

“I went to get my Russian passport,” says Grigory, a 35-year-old mechanic living in Chakhtarsk, Donbass, before boarding the bus to return home.

“I’m a little scared to go back, we hear shots and explosions, but my family is there. I will not leave, my job, my whole life is there, ”he says, his feet in the mud, the land plowed by clearly visible traces of tanks.

As one advances towards the border, the streets empty. In the last village before the border, Valentina Drujinenko, a 75-year-old retired housekeeper, sits in a pink puffer jacket on a bench with her neighbor.

Asked about Vladimir Putin’s decision to recognize the independence of the separatist territories, this Ukrainian of origin married to a Russian is ambivalent: “I understand the consequences, they will be horrible, our grandchildren will not be able to manage them. But if Vladimir Putin did it, that means it’s necessary. I respect him and I adore him”.

His neighbour, Maria Iagnouk, was born in 1941 and recounts having lived under the German occupation. “How not to be afraid? Who can not be afraid? I myself was born in the middle of the war,” she says in Ukrainian. “We don’t even watch the news anymore, it’s so scary.”