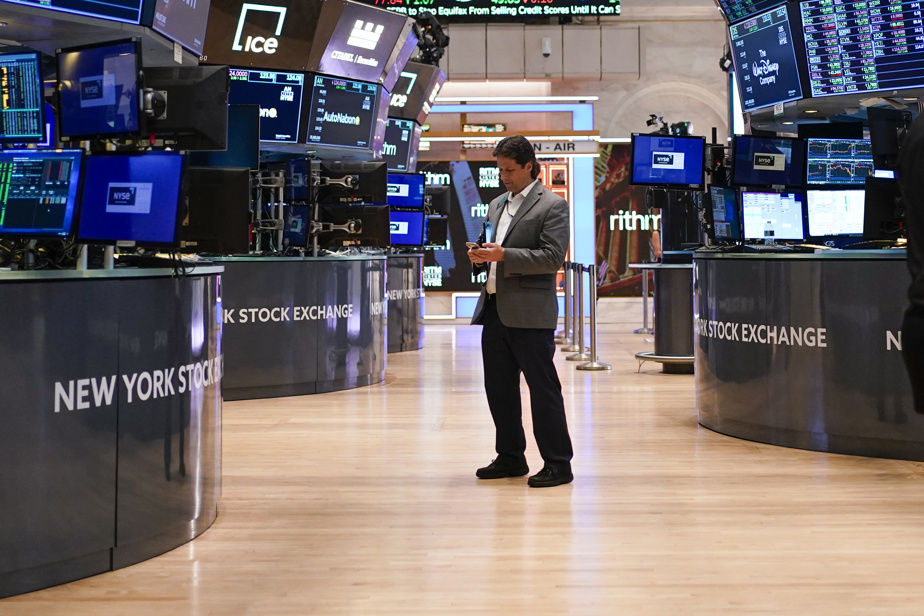 (New York) The New York Stock Exchange ended sharply higher on Friday, the hope of an inflection of the American central bank (Fed) outweighing the poor results of the technology sector.

The session, like the week, was “a standoff”, with “on the one hand, the disappointing results of the giant capitalizations of technology and, on the other, the signs of an economy which is softening and the growing hopes of a Fed deceleration,” explained Angelo Kourkafas of Edward Jones.

Alphabet on Tuesday, then Meta on Wednesday, and finally Amazon on Thursday all surprised Wall Street unfavorably, “but the market didn’t go down much, and even ended up recovering,” said Karl Haeling of LBBW.

“Most of the damage was confined to the technology sector and did not spread to the rest of the market,” he continued.

The analyst also noted that the financial system had seen this week net inflows of money into equity investment funds, which testifies to a renewed appetite of investors for this market.

Another strong marker, according to Karl Haeling, the S&P 500 has crossed, on the rise, an important technical threshold (the average over the last 50 sessions) and has not come down.

The momentum was such Friday that even the technology sector ended in the green, Amazon being the only bad student (-6.80% to 103.41 dollars).

The US retail giant posted a 9% drop in net profit in the third quarter and expects anemic growth for its standards of between 2% and 8% year on year in the crucial fourth quarter of the financial year. because it includes the end of year celebrations.

Apple (+7.56% to 155.74 dollars) has toned down the rather bleak picture painted by the other four technology giants this week. It posted higher-than-expected revenue and profit on Thursday, even as iPhone sales missed the mark.

Unlike its competitors, the apple group also preserved its margins and showed cautious optimism for the current quarter.

For Angelo Kourkafas, the macroeconomic indicators of the week confirmed that the economy was in a cooling phase, in particular those relating to October, the most recent period, such as the PMI indices which revealed that activity was contracting in the United States. -United.

Therefore, it seems “reasonable” to think that “the end of the monetary tightening cycle is in sight”, according to the analyst, which delights traders.

Although they rebounded on Friday, bond yields fell back this week, indicating a change in investor expectations, after 12 consecutive weeks of increases, a sequence not seen for nearly 40 years.

On the side, no trace of Twitter, whose listing was suspended on Friday after the formalization of the takeover by Elon Musk. The New York Stock Exchange said it expects to delist after all shares are repurchased at $54.20 per share, slightly better than the last price ($53.70).

ExxonMobil (+ 2.93% to 110.70 dollars), which had already reached its historic record in session the day before, remained at the forefront after the publication of a quarterly net profit well above analysts’ expectations, even if its turnover came out below forecasts.

The group took advantage of high oil and gas prices, and produced its largest volume of refined products in 14 years.

Its competitor Chevron (+1.17% to 179.98 dollars) did even better, smashing market estimates, with net profit almost doubled over one year. The group of San Ramon (California) notably multiplied by six its profits in international refining.

Carried by the general enthusiasm, Intel (+10.66% to 29.07 dollars) soared despite the fall in its turnover in the third quarter and the lowering of its forecasts for the year.

Colgate-Palmolive advanced (+1.93% to 74.64 dollars), after announcing results generally in line with expectations, but marked by a compression of its margins and an increase in its costs. The group of hygiene and maintenance products has, moreover, revised slightly downwards its forecasts for the whole of the year.

The Toronto Stock Exchange closed higher on Friday for a sixth consecutive session, despite declines in the base metals, telecommunications and battery metals sectors, while the major American indices also advanced.

“Some of the inflation data that came in was really in line with expectations,” he said. So I think the market is recovering. »

Markets in Canada are more mixed, Headland added, with commodities and materials dragging the index lower. He added that the GDP data released on Friday did not bring any major surprises, especially after the Bank of Canada’s revised estimates released earlier this week.

“The Canadian stock market typically doesn’t move as much on national economic data as the US market does,” he explained.

Overall, October was a good month, Headland said. “The way September ended set the stage for a decent recovery in October. »

Markets could become less volatile in the weeks and months ahead as Canada and the United States near the end of central bank tightening cycles, Headland predicted.