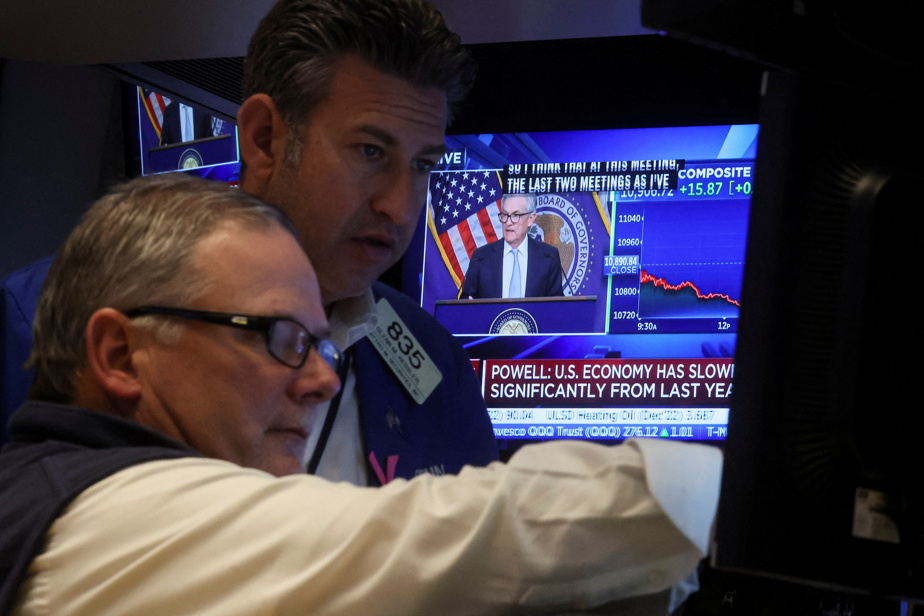 (New York) The New York Stock Exchange ended in the red on Thursday, after the shock of the tone of the Fed even firmer than expected and before US employment.

The shares ended with a loss, “smaller than at the height of the session, following the fourth rate hike of 75 basis points, and strict comments from the Fed”, underlined the Schwab analysts.

Through its President Jerome Powell, on Wednesday, the American Central Bank let it be known that “there was still a lot of work to do, that the terminal rate could be higher, that we had to be aggressive on rates for longer summed up Jack Ablin of Cresset Capital.

“In a nutshell, he blasted the market with a stick,” the analyst said.

During his press conference, the head of the Fed mainly acknowledged that the Monetary Committee now considered that the terminal rate or the target for overnight rates, capable of taming inflation, was higher than what was planned for September. This implies that increases in the cost of money will continue longer to reach this so-called “restrictive” rate threshold.

“As a result, hopes of a ‘pivot’ (or inflection) from the Fed have been dashed,” recalled Patrick O’Hare of Briefing.

Bond rates also took an upward slope, although moderating their surge at the end of the session. The rate on 10-year Treasury bonds was 4.12% against 4.19% in the morning and 4.04% the day before.

Among the indicators of the day, weekly unemployment benefits fell from 1,000 to 217,000 last week, showing a still dynamic and tense job market, which is not sought by the Fed, because it may stimulate inflation.

On Friday, the US Department of Labor will release official employment figures for October.

Analysts are counting on the creation of 220,000 jobs against 263,000 in September and a slight increase in the unemployment rate to 3.6%.

“These forecasts are not an indication that things are slowing down quickly,” doubted Jack Ablin.

In addition, activity in services in the United States has stalled more than expected at 54.4% in October against 56.7% the month before and 55.2% expected, according to the ISM index.

On the stock exchange, the Qualcomm component group lost 7.66%, after quarterly results in line with forecasts, but projections below expectations for the next quarter, given the uncertain economic environment.

The energy sector (+2%) and industrial stocks (+1%) kept the Dow Jones from falling too much. The aircraft manufacturer Boeing thus concluded a strong increase (+6.34% to 156.75 dollars).

The Toronto Stock Exchange also closed lower on Thursday, but the damage was limited by stocks in the energy, industrials and base metals sectors, while the major US indices also finished lower. .

In the currency market, the Canadian dollar traded at an average rate of 72.73 cents US, down from 73.37 cents US on Wednesday.