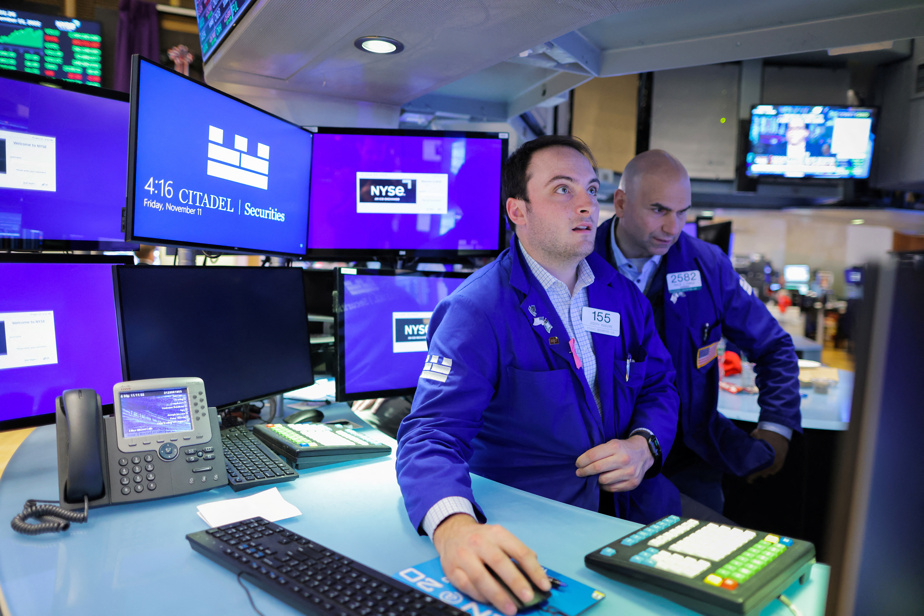 (New York) The New York Stock Exchange ended higher on Tuesday, helped by the confirmation of a slowdown in inflation, but the momentum lost momentum at the end of the session, lack of conviction.

Wall Street had started the session on a high note, the S&P 500 gaining up to 1.80%, driven by a flurry of good macroeconomic indicators and company results deemed satisfactory.

On the one hand, the manufacturing activity index in the New York region returned to positive in November, at 4.5 points, against -9.1 points in October, and -6.0 points expected by economists .

As for the producer price index, it only increased by 0.2 percentage point over one month in October, against 0.4 point expected. Over one year, inflation reached 8.0%, the lowest since July 2021.

After these publications, the operators granted a probability of nearly 60% to the hypothesis of a key rate stopping its course at a range of 4.75% to 5% by June, when they saw it mostly exceed 5% last week.

The possibility of a breather from the Fed put bond yields under pressure. The yield on 10-year US government bonds fell as low as 3.75% for the first time in almost a month and a half, before recovering slightly to 3.76%.

Walmart, in particular, was acclaimed (+6.54% to 147.44 dollars), after the publication of a quarterly turnover well above expectations, boosted by the American market and food products, a market on which the Bentonville (Arkansas) group is gaining market share with its low prices.

Investors did not hold it against the retail giant for its heavy loss of nearly 1.8 billion dollars, entirely attributable to an exceptional charge of 3.3 billion linked to an amicable agreement in the file of opiate drugs .

The strength of Walmart has benefited the rest of the sector, whether it is Target (+3.95%), whose results are expected on Wednesday, or the chain of semi-wholesale Costco (+3.29% ).

The DIY store chain Home Depot only marginally benefited from this momentum (+1.63% to 311.93 dollars), despite results that exceeded expectations. GlobalData analyst Neil Saunders is worried about Americans saving on home improvements and the effects of the housing market slowdown on group sales.

However, the indices ran out of steam at the end of the session and the Dow Jones even briefly went into the red, before ending on a modest increase.

“It’s a scenario we’ve seen in recent sessions, with gains early in the session and loss of momentum at the end,” said Jack Ablin of Cresset Capital.

For him, this recurring movement is due to the fact that individuals tend to intervene in the market at the start of the day, while institutional investors do so rather at the end of the session.

What happened on Tuesday thus shows, according to him, that institutions are showing caution, “and this is generally not a good sign”. For the analyst, “we got carried away” after the publication last Thursday of the CPI consumer price index, which came out lower than expected.

Resuming their yo-yo movement dictated by the oscillations of the bond market, an indicator of the cost of financing their growth, technology stocks had the wind in their sails, from Apple (+1.19%) to Tesla (+1, 82%) and Alphabet (+2.80%).

Several Chinese companies listed in New York surged as investors hoped, according to Briefing.com’s Patrick O’Hare, for stronger support from the Chinese government for the economy after the publication on Tuesday of poor retail sales figures, down in October year on year.