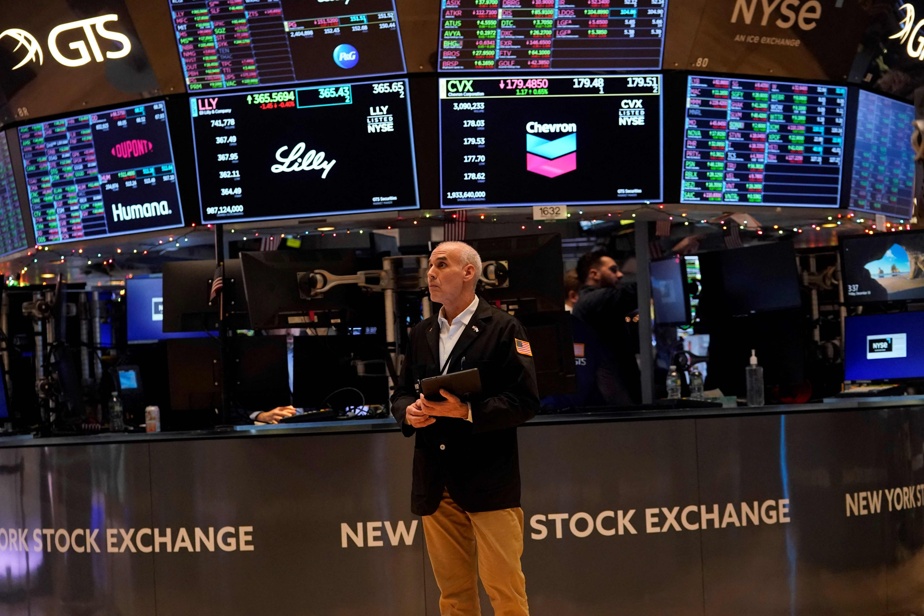 (New York) The New York Stock Exchange ended sharply higher on Friday, buoyed by a series of indicators showing a deceleration in the economy and inflation, but also the resilience of the labor market.

The session was steered even before the opening by the publication of the monthly report from the Department of Labor, according to which the American economy added 223,000 jobs in December, down from the 256,000 in November, but well above the 200 000 creations expected by economists.

This higher-than-expected figure could have upset operators and fuel fears of continued forced monetary tightening by the US central bank (Fed).

But Wall Street has mainly retained the slowdown in the rise in the average hourly wage, to 0.3% over one month against 0.4% in November. This is one of the two elements most followed by the Fed, along with price trends, to assess the effectiveness of its fight against inflation.

“It’s a win-win for the Fed, with wage increases easing while the job market remains stable,” commented Peter Essele of the Commonwealth Financial Network.

The momentum initiated by the employment report was fed, a little later, by another indicator, the ISM index, which showed that activity in services in the United States had contracted in December, for the first time since May 2020.

“We are still in a context where bad (economic) news is welcomed,” explained Nick Reece of Merk Investments, with signs of a weakening US economy that could encourage the Fed to ease off.

For the analyst, the New York market was more sensitive to the ISM than to the employment report, “because it was well below what was expected and below 50%” (49.6% ), indicating a contraction in activity.

“That’s what drove down (bond) rates and pulled the market,” he said.

As for the 2-year rate, which is more sensitive to monetary policy expectations, it dropped 20 basis points (0.2 percentage point), a rare drop in the bond market, at 4.25%.

After a sluggish start, the entire tech sector has been set in motion, driven by a hunt for bargains and the prospect of a more favorable interest rate environment for the significant financing it needs to develop.

Even Tesla, after initially falling to its lowest level in almost two and a half years, managed to take the suction (+2.47% to 113.06 dollars).

“After the jobs report, the scenario of a soft landing (of the economy) seems a little more credible than a month ago,” said Nick Reece, although some data from the report, from same as the ISM index, urge caution, he said.

Elsewhere on the stock exchange, the airline Southwest Airlines (+4.62% to 35.82 dollars) also took off despite the announcement that the major disruptions which led to the cancellation of more than 16,700 of its flights will cost between $725 million and $825 million.

This financial impact, which is due to a shortfall, but also to additional expenses to solve the logistical problems caused by the winter storm Elliott will push Southwest into the red in the fourth quarter, the company has warned.

The chain of semi-wholesale stores Costco paraded (+7.26% to 482.87 dollars) after reporting sales up 5.5% in December compared to the same period last year .

WWE, the American professional wrestling league, listed on the New York Stock Exchange (NYSE), jumped (+ 16.98% to 84.27 dollars) while its former boss, Vince McMahon, took control of authority of the company.

Forced to leave last year after accusations of sexual harassment, the one who is still the group’s reference shareholder says he wants to participate in negotiations on the new television broadcasting contract, but also to lead the search for a potential buyer.

The Toronto Stock Exchange closed up 1.58% on Friday, buoyed by broad-based gains, while major US indices jumped more than 2.0%.

“We are seeing a slight recovery,” said Angelo Kourkafas, investment strategist for Edward Jones, after a more disappointing start to the year earlier in the week.

Mr. Kourkafas noted that the new employment data on both sides of the border, while still strong, gave hope to investors.

Canada reported an astonishing 104,000 job creations in December and the unemployment rate fell to 5.0%, while unemployment also fell in the United States.

Although on the face of it the employment data in Canada and the United States does not look good for investors given concerns about the impact of the labor market on inflation and interest rates Interestingly, a closer look at the figures shows that while unemployment continues to be high, wage growth has slowed somewhat, raising hopes that a wage-price spiral can be avoided, Kourkafas explained.

Further rate hikes were already a certainty in the U.S. and Friday’s data cemented the likelihood of a rate hike in Canada in January, he added, but investors appeared to view those numbers as not all winners, and that they were perhaps even a sign that a recession is not as imminent as some think.

“We still consider the possibility of a so-called soft landing to be slim, but it remains a possibility,” Kourkafas said.

There are also global signs of slowing inflation, such as in Europe, he continued.

U.S. inflation data, due next week, could help bolster investor optimism, he said, although central bankers’ work is not yet done.

In the currency market, the Canadian dollar traded at an average rate of 74.15 cents US, up from 73.72 cents US on Thursday.