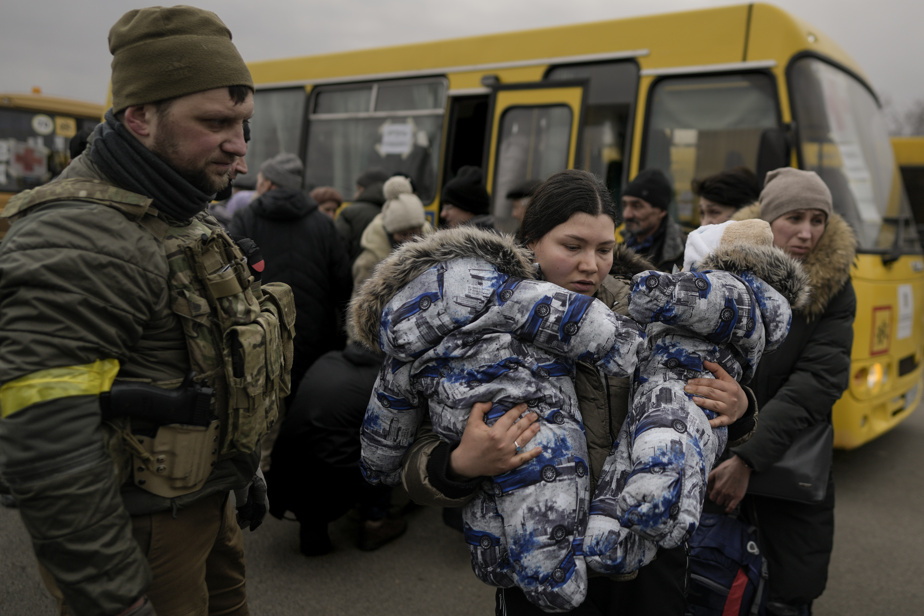 (Kyiv) Exhausted, trembling, some of the approximately 20,000 civilians evacuated Tuesday from Mariupol, a major port city in southeastern Ukraine besieged by Russian forces, arrived in Zaporizhie, 250 km to the northwest.

“Today, around 20,000 people left Mariupol” in 4,000 cars, deputy head of the Ukrainian presidential administration Kyrylo Tymoshenko said in a statement.

“It’s the first time I’ve been able to breathe in weeks,” said Mykola, father of two, at the wheel of his car where blankets, shoes and other hastily loaded possessions are piled up pell-mell.

His family is one of several thousand people who arrived in Zaporizhie on Tuesday in 570 vehicles, many of which had no windows or windshields.

But thousands of other refugees were forced to spend the night on the road, according to Mr Tymoshenko.

Arriving in small groups, these cars carrying bits of white fabric hanging from the mirrors as a white flag parked in the parking lot of a shopping center on the outskirts of the city, which has become a registration center for the thousands of civilians fleeing Russian bombs.

All described a grueling journey during which they were forced to drive off the road to avoid Russian troops and checkpoints, in constant fear of enemy fire.

Mykola, who declined to give his full identity because he has to stay in Ukraine, told how he had to drive through a minefield with his wife and two children in the car, guided by armed forces Ukrainians.

“As we were moving forward, we saw a charred car. The soldiers told us that it had exploded with a woman inside after hitting a mine an hour before we got there,” he said.

The city of Zaporizhie is the first still more or less safe for the thousands of civilians fleeing Mariupol, where hundreds of thousands of people are still living in dire conditions.

A total of around 29,000 people were evacuated from several besieged towns across Ukraine on Tuesday alone, according to the Ukrainian presidency.

By early afternoon, the municipality of Mariupol had reported that 2,000 vehicles had left the city and that 2,000 more were waiting to do the same.

On Monday, 160 vehicles had already left the port city where conditions are catastrophic after days of bombardment and siege by Russian forces and their pro-Russian separatist allies, which force residents to live holed up in cellars.

The humanitarian corridor used by these columns of vehicles connects Mariupol to Zaporozhye, via Berdiansk, that is to say about 270 km of road.

Dmytro, who arrived in Zaporizhie with his wife and two children on Tuesday, said he had tried three times to leave Mariupol with his family. The two previous times, the Russian forces ordered them to turn back.

Black hands, Dmytro explained that he had not been able to wash himself for two weeks and that the inhabitants of Mariupol were forced to drink water from the river. He also said he looted shops to feed his family.

“We lived underground in -4 degrees Celsius,” he said.

After a series of failures, for lack of a Russian-Ukrainian ceasefire, evacuations have accelerated in Mariupol, while in the city, the inhabitants lack water and food.

Regional governor Pavlo Kyrylenko also claimed on Tuesday that Russian forces were holding workers at a Mariupol hospital and 400 nearby residents “hostage” inside the facility, accusations that could not be verified. independently.

The capture by Moscow of this port city, populated before the war by 450,000 inhabitants and located on the shores of the Sea of ​​Azov, would be an important turning point in the invasion of Ukraine.

It would make it possible to make the connection between the Russian forces coming from annexed Crimea, which have already taken the ports of Berdiansk and Kherson, and the separatist and Russian troops in the Donbass.