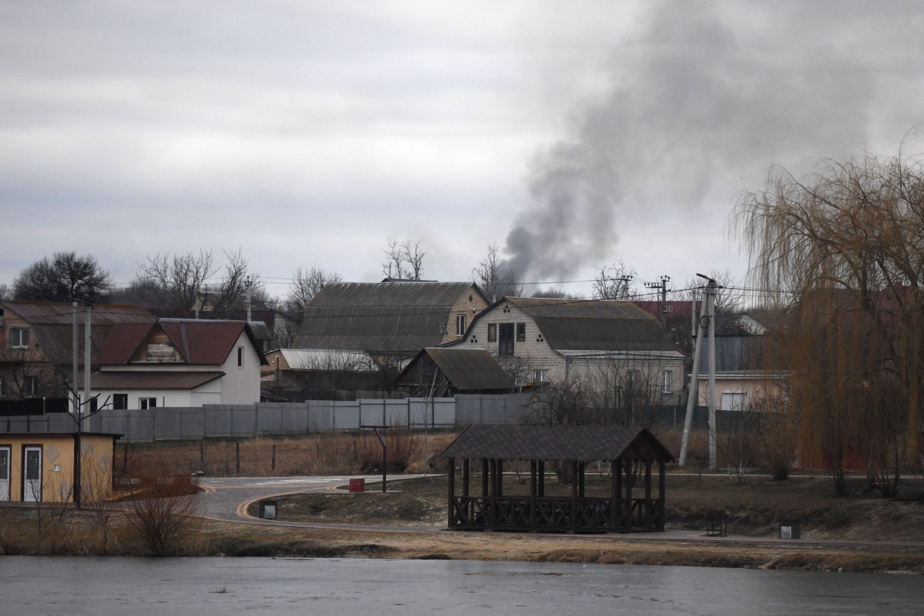 (Gostomel) In a few hours, the Antonov military airport in Gostomel, at the gates of the Ukrainian capital, was theirs. The Russian forces arrived with the doors of the helicopters wide open, firing machine guns in bursts before rappelling down, witnesses told AFP.

“There were people sitting in the helicopters, the doors open, flying over our houses,” says Serguiy Storojouk near the airport, travel bags in hand, fleeing the area looking haggard.

“The helicopters arrived and then the fighting started. They used machine guns, grenade launchers,” he adds.

The swarm of Russian helicopters arrived at the end of the morning from Belarus, skimming the roofs of the houses and sowing terror on its way to the capital Kiev, noted an AFP journalist.

Gostomel Airport is immediately on the northern edge of Kiev, and the fighting there is closest to the capital on the first day of the Russian invasion.

According to Olexandre Kovtonenko, a 30-year-old civilian living nearby, they were supported by two fighter jets which fired missiles at Ukrainian ground units at the start of the assault.

“Then there were shootings, it lasted three hours,” he testified to AFP. “Then three more planes arrived and they started shooting again. »

“The Russian troops are there”

Then, the Russian soldiers fell from the sky, relates Mykola Chymko, a taxi driver who has been commuting since the morning in the area.

“Two helicopters were flying behind me and firing at the side of the road,” he said.

“Then I came back and I see about 100 people. And I see that their uniforms are not ours”.

The soldiers and paratroopers wore white armbands and also an orange and black striped insignia, that of St. George, which identifies them as Russians.

Several times an hour the Ukrainian armed forces and the Russian forces come across artillery fire. After the dull sound of gunfire, black smoke stagnates in the gray sky.

President Volodymyr Zelensky said he hoped the Russian forces would be quickly surrounded and destroyed.

But in the immediate perimeter of the airport, the Ukrainian forces remained inconspicuous, noted AFP journalists.

A few civil defense protection units appeared on the side of the road, guns and shovels in hand.

The service station at the crossroads was swarmed by motorists, hoping for a last fill-up before the leak.

By bike, on foot or trying to hitchhike, provisions and travel bag in hand, some inhabitants wander along this road.

In Gostomel, Ludmyla Klimova, who is shaking like a leaf between each explosion, is also walking, but no longer knows where to go or what to do.

“The base is smoking there, it has been bombed, our houses are nearby. We don’t know where to run, my parents are here, my sister,” she says in the village square.

“The Russian troops are there, a friend of mine lives there, and the Russians have already approached his mother with a machine gun,” she says before recounting that just yesterday her small, uneventful village was teeming with life.

And above all had not fallen into the hands of the enemy.