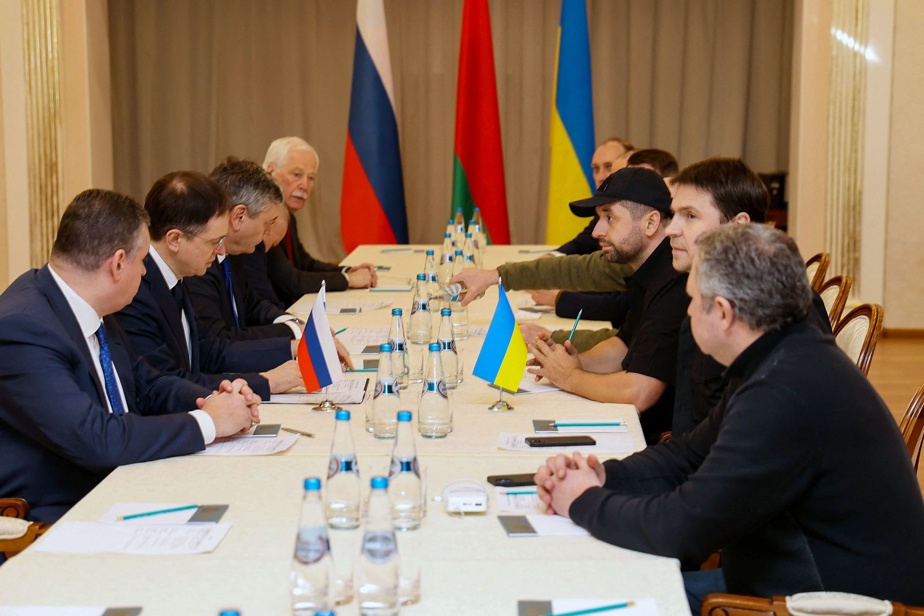 (Kiev) Russian and Ukrainian delegations began first talks in Belarus on Monday on the fifth day of Russia’s invasion of Ukraine, which caused more than half a million Ukrainians to flee their country.

These first negotiations, which began around 6 a.m. EST, come as Vladimir Putin’s forces meet strong resistance from the Ukrainian army, and the sanctions of an unprecedented scale adopted by the West are wreaking havoc on the Russian economy.

According to the Ukrainian presidency, Kiev intended to ask during the discussions – organized in a residence of Belarusian President Alexander Lukashenko, on the Ukrainian-Belarusian border – “an immediate ceasefire and the withdrawal of (Russian) troops from Ukrainian territory”.

President Zelensky, who is not taking part in the negotiations, the Ukrainian delegation being led by Defense Minister Oleksiï Reznikov, called on Russian soldiers from Kiev to “lay down their arms”.

He also asked the European Union (EU) for the “immediate” integration of Ukraine. “I’m sure that’s right. I’m sure it’s possible,” he said.

European Council President Charles Michel, however, stressed that there were “different opinions” on Ukraine’s membership among the Twenty-Seven, seeming to rule out any quick decision.

The head of the Russian delegation, the Kremlin adviser Vladimir Medinski, for his part indicated that he wanted to “find an agreement” with Kiev which would be “in the interest of both parties”.

Kremlin spokesman Dmitry Peskov declined to state Russian demands, stressing that the negotiations should be done “in silence”.

The Belarusian state news agency Belta broadcast images of the negotiation room, with a long table covered with a white tablecloth, a dozen chairs on each side, and the flags of the three countries in the background.

“You can feel totally safe, it’s our sacred responsibility”, declared to the delegations welcoming them the head of Belarusian diplomacy, Vladimir Makeï.

The government of Belarus, where large Russian forces are stationed, had amendments to its Constitution ratified by referendum on Sunday, opening the door to a nuclearization of the country.

The head of European diplomacy Josep Borrell considered this development “very dangerous”, because “it means that Russia will put nuclear weapons in Belarus”.

On the ground in Ukraine, Kiev said on Monday that the Russian army had tried overnight to storm the capital, but that the attacks had been repelled.

The city bristled with makeshift barricades, while public electronic signs warned the Russians that they would be greeted “by bullets.”

“The Russians know very well that our land is burning under their feet,” Pavlo Krasnopruov, ready for combat and actor in civilian life, told AFP.

The Russian army has said that civilians can leave Kiev “freely” and accused the Ukrainian authorities of using them as “human shields”, raising the specter of a large-scale assault.

The Ukrainians claim that Russian forces have suffered heavy losses in northwest Ukraine, and have been stopped southeast of Kiev, but continue their offensive on other localities, in particular Mariupol, an important southern port. -East.

In the absence so far of a major victory for the Russian army, Vladimir Putin has taken a new step in threatening to widen the conflict, already the most serious in Europe since 1945: he declared on Sunday that he had put his nuclear forces in a “special state of alert” in the face of “bellicose declarations by NATO” and the “illegitimate” sanctions imposed on Russia.

Over the weekend, the Europeans tightened their economic sanctions against Russia. They have excluded several Russian banks from the Swift international interbank system, and banned all transactions with the Central Bank of Russia, a measure also announced by the United States on Monday.

The Central Bank should thus see all its assets frozen in the EU and the United States.

The sanctions are beginning to weigh: the European Central Bank has noted the “bankruptcy or probable bankruptcy” of the European subsidiary of the first Russian bank, Sberbank.

To defend the economy and the rouble, which reached historic lows against the euro and the dollar on Monday, the Russian Central Bank announced that it would raise its key rate by 10.5 points to 20%.

Mr. Putin was focusing Monday morning on these economic problems, according to his spokesman. “The sanctions are heavy, they are problematic […]but Russia has all the necessary capabilities to compensate for the damage,” said Dmitry Peskov.

But several Muscovites interviewed by AFP are worried about their savings.

Natalia Prochina, 75, said she was preparing to withdraw all her savings from the big VTB bank “so as not to lose all her fortune again”, as she had already happened during the Russian financial crisis of 1998.

And oligarch Oleg Deripaska, founder of aluminum giant Rusal, called for “a change in economic policy and an end to all this state capitalism,” in a rare criticism of the Kremlin.

The Europeans have also closed their airspace to Russian companies. Russia responded by closing its doors to airlines from 36 countries.

If the European countries are for the most part members of the Atlantic Alliance – which announced that it would not send troops to Ukraine – they announced on Sunday unprecedented measures of military support for Kiev: release of 450 million euros to finance arms deliveries and dispatch of combat aircraft.

US President Joe Biden will meet again with his allies at 11:15 a.m. to “coordinate” a “united response” to the Russian attack, the White House announced.

French President Emmanuel Macron, President-in-Office of the EU, will participate in this videoconference and then have a dinner with German Chancellor Olaf Scholz and European Commission President Ursula von der Leyen.

The flow of refugees fleeing Ukraine continues to grow.

Since Thursday, more than 500,000 refugees have fled to neighboring countries, the UN High Commissioner for Refugees said on Monday. The EU said it expected more than seven million displaced people.

A majority go to Poland. But Romania, Slovakia and Hungary – all NATO member countries – are also concerned.

Known for his anti-migrant positions, Hungarian Prime Minister Viktor Orban eased restrictions on asylum applications, and Hungarians flocked to the Ukrainian border to offer bowls of goulash, offers of accommodation and comfort.

From Moscow also, the departures of Westerners should accelerate. The United States authorized the voluntary departure of non-essential staff from its embassy on Monday, and Italy and Belgium recommended that their nationals in Russia leave the country.

The Russians did not give any figures.

The 193 members of the United Nations General Assembly were to meet in an “emergency special session” on Monday to discuss the conflict.

France was to submit a resolution on humanitarian aid to Ukraine to the Security Council. Russia has a right of veto there which excludes any formal condemnation of the offensive.