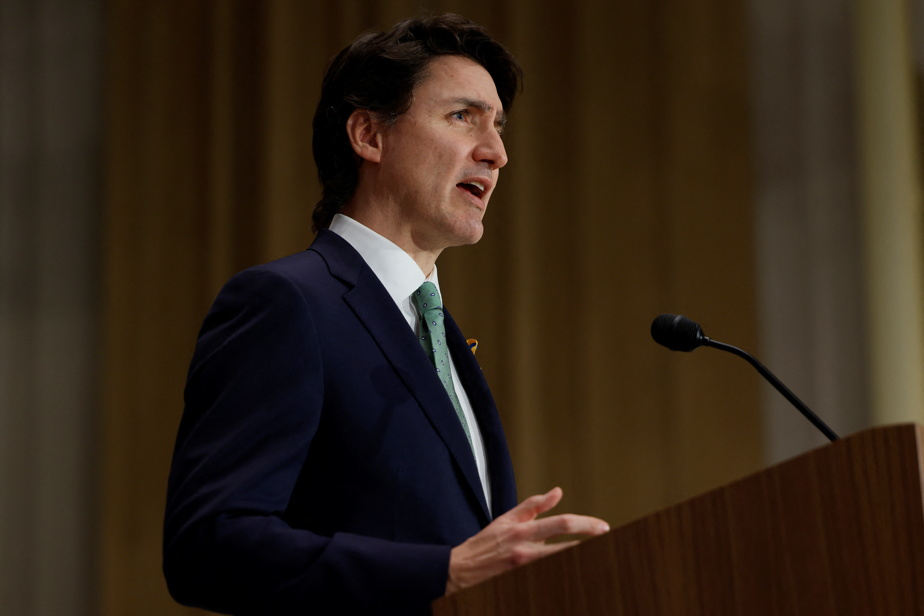 (Ottawa) After sending non-lethal military equipment, the Canadian government will supply anti-tank weapons and ammunition to Ukraine. It also bans imports of Russian oil and asks the CRTC to review the license of the Russian news channel RT. During an emergency debate Monday evening in the House of Commons, the opposition parties demanded that the federal government make other gestures to deter Russia and help the Ukrainians.

“Our message is clear: this pointless war must end immediately,” Prime Minister Justin Trudeau said at a press conference Monday afternoon. “Its cost will increase, and those responsible will have to answer for their actions. »

He praised the courage of Ukrainians who have chosen to defend their country, surrounded by the Deputy Prime Minister, Chrystia Freeland, the Minister of National Defense, Anita Anand, and the Minister of Immigration, Refugees and Citizenship , Sean Fraser. The Prime Minister, along with Ministers Freeland and Anand, ended his address with ” Slava Ukrainian which translates to “Glory to Ukraine”.

The whole world is inspired by the strength and intensity of their resistance.

These new measures are in addition to those announced earlier in the day to cripple the Russian government’s reserve assets. Like its allies, Canada has banned all financial institutions from doing any dealings with Russia’s central bank. He also imposed an asset freeze and a trading ban on Russian sovereign wealth funds.

The day before, the government had announced the dispatch of helmets, bullet-proof vests, gas masks and night vision equipment to help the Ukrainian population to fight. A first Hercules plane flew to Europe on Monday to deliver the equipment. A second is due to leave later this week.

The next delivery of lethal weapons includes 100 Carl Gustaf anti-tank rifles and 2,000 rockets from the Canadian Armed Forces reserve. This is the fourth shipment of military equipment sent by Canada to Ukraine.

“We will deliver them as quickly as possible over the next few days,” National Defense Minister Anita Anand said. However, she declined to provide further information to avoid putting Canadian Armed Forces personnel at risk.

Shipments are channeled to the Ukrainian border through Poland through an agreement negotiated with the government of that country. Foreign Minister Mélanie Joly is due to go there on Tuesday to meet members of the Polish government. “My role is to make sure that this aid reaches the Ukrainian soldiers who are fighting for their lives and for their homeland,” she said during a press briefing on the sidelines of the 49and regular meeting of the United Nations Human Rights Council in Geneva, Switzerland.

In addition to the delivery of weapons, it will also be a question of the Canadian aid which will be brought to the Ukrainian refugees who are pouring into Poland by the thousands. The Conservative Party, the Bloc Québécois and the New Democratic Party are unanimous in calling for the visa requirement for Ukrainians to enter Canada to be lifted.

The leaders of each of the three parties repeated it during an emergency debate in the House of Commons on Monday evening. Bloc Québécois leader Yves-François Blanchet pointed out that asylum seekers entering Quebec via Roxham Road do not have visas. “Isn’t there a reason to show this kind of leniency towards people who want to rejoin their families or come to take refuge in Canada? »

“The government must recognize that Ukrainians seeking security do not have months to lose,” said New Democratic Party leader Jagmeet Singh. ” It is urgent to take action. »

“The visa requirement is not currently being studied,” an official from Immigration and Citizenship Canada had indicated to the parliamentary committee earlier in the day. “We have to make sure that we review and verify the applications properly,” he added.

Nearly 4,000 applications have been approved by the Department so far through the rapid approval process set up in anticipation of the crisis, said Immigration Minister Sean Fraser. Any request made online with the keyword Ukraine2022 is given priority. Application fees are waived.

The federal government on Monday banned all imports of crude oil from Russia in the hope of hurting the oligarchs who profit from the industry to enrich themselves. The oil sector accounts for more than a third of Russian federal budget revenue. “Even though Canada has only imported very limited quantities in recent years, this action sends a powerful message,” Trudeau said.

Conservatives believe Canada should take advantage of the crisis to help Europe reduce its dependence on Russian oil and gas. They are calling on the government to reform its approvals process to allow the construction of new oil and gas pipelines.

“Canadian oil and gas are essential for the security and sovereignty of Canada and Europe,” said the interim leader of the Conservative Party, Candice Bergen, in the chamber. “It is obvious that when the Liberals stop, delay and cripple the extraction and sale of Canadian fossil fuels here and elsewhere, the winner is Putin. Why would we want to fund his war chest? »