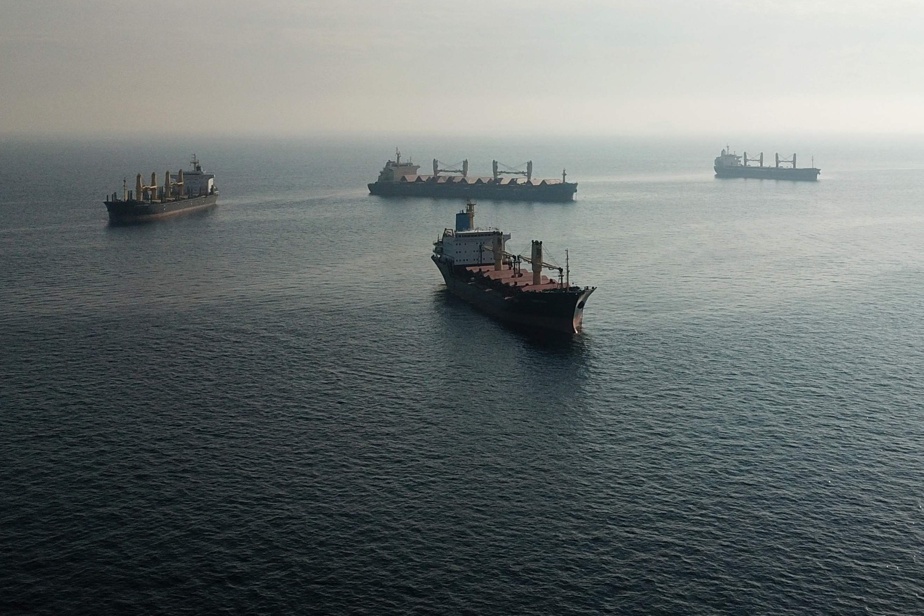 (Kyiv) The departure of freighters loaded with Ukrainian grain, at the center of a global food security issue, was suspended on Tuesday evening after Vladimir Putin demanded guarantees that this shipping lane will not be used to attack the Russian fleet , in the middle of the war against Ukraine.

These demands, expressed during talks on Tuesday with Turkish President Recep Tayyip Erdogan, echo attacks by marine drones, not claimed at this stage by Ukraine, which hit buildings of the Russian military fleet in the bay on Saturday. of Sevastopol (Crimea), hitting at least one.

Russia launched a wave of massive cruise missile strikes on Kyiv and the country’s civilian infrastructure on Monday, and announced on Saturday that it was withdrawing from the agreement which allowed the export of millions of tonnes of Ukrainian grain via the Bosphorus. .

In unison with Western allies and the United Nations, French President Emmanuel Macron on Tuesday denounced “a unilateral decision by Russia which is once again harming world food security”, following a meeting with his Ukrainian counterpart. Volodymyr Zelensky.

He for his part underlined Kyiv’s desire to continue its exports within the framework of the cereals agreement, and asked France to help protect it against Russian missile attacks.

During the day, President Erdogan, who used his preserved ties with both Moscow and Kyiv to stand as guarantor, with the UN, of the July agreement on the export of Ukrainian cereals – in particular to of the Muslim and African world – said he was “confident” about the chances of reaching a solution, after a meeting with Vladimir Putin.

But the Kremlin dampened these hopes by announcing on its side that the agreement could only resume effect if Kyiv presented “real guarantees […] that the humanitarian corridor will not be used for military purposes”.

As a result, the Joint Coordination Center (JCC) based in Turkey and in charge of the application of the agreement in the Black Sea announced on Tuesday evening the suspension of all cargo movements on Wednesday.

“The United Nations Secretariat at the Joint Coordination Center, the delegations of Ukraine, Russia and Turkey have agreed not to plan any movement of cargo ships on November 2 under the Black Sea Grains Initiative” , the JCC said in a statement.

Russia had warned on Monday of the “danger” that cargo ships would incur continuing without its consent to navigate in the corridor leading from the Ukrainian ports to the Bosphorus, and to the Mediterranean.

The UN coordinator, Amir Abdullah, reacted by stressing on Twitter that no civilian cargo should “become a military target or be held hostage”. “Food must pass,” added the Sudanese official.

On the military ground, while it is in the south, in the region of Kherson, that the Russian forces have been waiting for weeks for the launch of a massive Ukrainian attack, the beginnings of a Ukrainian counter-offensive were taking shape on the eastern front, further north, soldiers engaged in this sector said on Tuesday, confirming statements by the Ukrainian authorities.

“The trend is good, indeed on our side, the front line has advanced quickly and well”, confirmed, from a position in the village of Zarichne, an officer of the special forces of the Ukrainian army, with the code name “Iva in operation on this front.

In Kyiv, after destructive strikes on Monday, water and electricity supplies were restored on Tuesday.

The supply “has been fully restored”, said the mayor of Kyiv Vitali Klitschko, while nearly 80% of the capital’s inhabitants were without water and 350,000 homes without power.

Russia has been stepping up drone and missile strikes against water and electricity systems in Ukrainian cities since early October.

Anti-aircraft sirens sounded again in the city in the morning. According to the Ukrainian military, Russia on Monday launched 55 cruise missiles, 22 S-300 anti-aircraft missiles and combat drones for a wave of strikes across the country.

As Moscow and Tehran continue to deny deliveries of Iranian combat drones to the Russian army, the United States said on Tuesday it was “concerned” by the potential delivery this time of Iranian surface-to-surface missiles, to supplement the dwindling stocks of Russia.

The Russian occupation authorities of the Kherson region, in the south, have for their part announced new evacuations, by the thousands, of inhabitants of this zone towards the East, after having transferred nearly 70,000 people last week.

“I have decided to extend the evacuation zone by 15 kilometers from the Dnieper,” said the governor installed by Moscow in Kherson, Vladimir Saldo, in an address published on Telegram.

Ukraine denounces these evacuations as a “deportation” of the inhabitants.

Elsewhere on the front, the Ukrainian presidency reported Russian drone attacks in the Poltava and Dnipropetrovsk regions in the center of the country, and missiles on several other localities.

Five civilians have been killed and nine injured in the past 24 hours in Ukraine, according to Deputy Head of the Presidency Kyrylo Tymoshenko.

In Bakhmout, one of the hotspots on the front in eastern Ukraine, AFP journalists have witnessed artillery fire as fighting for this city with little strategic value has raged for more than four month.

“It’s total war. Total, because we use everything”, said the sergeant in the name of “Petrokha”, describing an intensity of fire unprecedented since the Second World War.