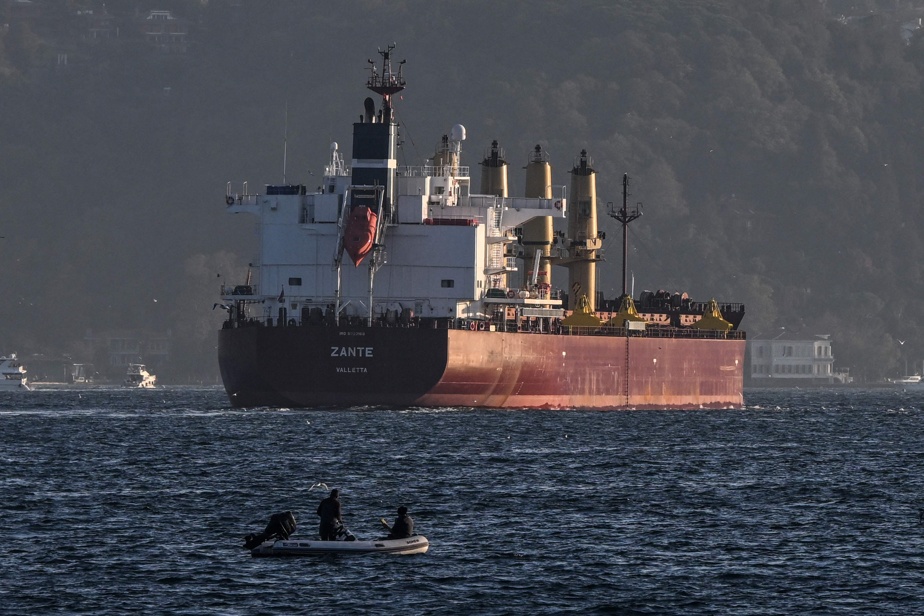 (Kyiv) Cereal exports resumed Thursday morning from Ukrainian ports, after Russia returned to the agreement on a humanitarian corridor, the G7 committing for its part to prevent Moscow from “starving” and making “freeze to death” Ukrainians this winter.

At the same time, the IAEA said Thursday that it had not detected at this stage “no sign of undeclared nuclear activities” in three places inspected at the request of Kyiv, accused by Moscow of having erased evidence of the preparation of a “dirty bomb”.

At midday, “seven cargo ships carrying a total of 290,102 tons of grain and agricultural products are passing through the humanitarian corridor under the Ukrainian Grain Initiative in the Black Sea”, confirmed the UN delegation to the Joint Coordination Center (JCC) in Istanbul, responsible for overseeing the international agreement.

Ukrainian food exports reached ten million tonnes on Thursday thanks to the Black Sea Initiative, said UN Secretary General Antonio Guterres, calling for the renewal of this grain agreement which “reduces the risk of hunger” in the world.

Russia resumed on Wednesday its participation in this agreement, signed in July under the aegis of the UN and Turkey, on the export of cereals and other agricultural products, considering that it had received guarantees from Kyiv on the demilitarization of the humanitarian corridor safe in the Black Sea.

According to the Turkish Ministry of Defense quoted by the official Anadolu agency, 426 boats have already followed this secure route since 1er august.

The United States, like the UN, welcomed this outcome, and praised Turkey’s role, but stressed that the grain agreement must now be extended beyond the scheduled November 19 deadline.

“Before deciding to continue, it will be necessary to carry out an assessment”, however warned the spokesman of the Kremlin, Dmitry Peskov.

Moscow had suspended its participation in the grain agreement on Saturday after an attack carried out with marine drones against its fleet based in the harbor of Sevastopol, in annexed Crimea.

The Russian army has accused Ukraine of having carried out this operation, which hit at least one Russian military building, with the help of “British experts” and using the maritime corridor reserved for grain exports.

Russia also summoned the British ambassador to Moscow on Thursday to tell her that “such hostile actions by the United Kingdom risk leading to an escalation of the situation which could have unforeseeable and dangerous consequences”, declared Russian diplomacy in a statement. London denies any involvement.

Faced with the war, Switzerland invoked its neutrality to prohibit Germany from sending Swiss-made ammunition to Ukraine for the anti-aircraft defense tanks that Berlin wants to deliver to Kyiv. Conversely, the Bulgarian parliament decided on Thursday to help Ukraine militarily by sending weapons after procrastination linked to the country’s historical proximity to Russia.

The G7 countries, meeting in Münster, Germany, denounced the “treacherous methods” of Russia in its way of waging war by trying to “starve, thirst or freeze people by attacking civilian infrastructure and should consider “ways to continue to support Ukraine”, according to diplomatic sources.

On the ground, the separatist authorities in eastern Ukraine announced Thursday the release of 107 soldiers in a new exchange with Kyiv, which will recover the same number of prisoners on its side.

“We are bringing back 107 of our fighters from Ukrainian jails”, of which “65 come from the People’s Republics of Donetsk and Luhansk”, said one of the main leaders of the pro-Russian separatists, Denis Pushilin, on Telegram.