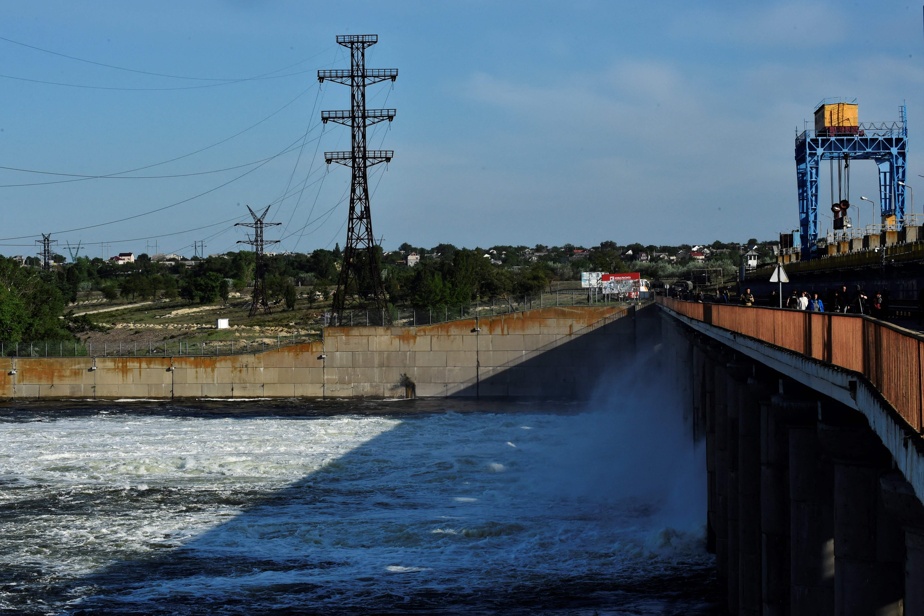 (Kyiv) After two strikes for which Russians and Ukrainians blame each other, the city of Kherson, in southern Ukraine, still occupied by the Russian army despite a Ukrainian push, was without electricity or water on Sunday and the dam of Kakhovka, in the same region, was damaged.

Vladimir Saldo, head of the Moscow-installed Kherson regional administration, told Russian broadcaster Rossiya-24 that “the power supply should be back today” on Sunday.

“Three concrete pylons carrying high-voltage lines were damaged on the Berislav-Kakhovka axis” by a Ukrainian strike, the occupation administration said earlier on Telegram. “Currently, there is neither electricity nor water in the city (of Kherson) and in certain districts of the region”, annexed by Moscow at the end of September.

For his part, the head of the Ukrainian military administration of the Kherson region, Yaroslav Yanouchevych, declared that “the Russian army blew up high-voltage lines” over a length of 1.5 km in Berislav. “Occupiers also destroyed high-voltage lines leading to the city of Kherson”, causing “supply problems” for the city and other municipalities, according to the same source.

This is the first known power and water cut in Kherson, at the hands of the Russian army since the start of its offensive in Ukraine on February 24.

Kherson is the main Ukrainian city taken by Russian forces since February. Ukrainian troops have been closing in for several weeks.

Since the start of the conflict, the Ukrainian military has very rarely touched the civilian energy infrastructures that the Russians have seized, targeting instead the supply lines of the Russian army.

Russia, for its part, has destroyed around 40% of Ukraine’s energy infrastructure in recent weeks with the help of missiles and suicide drones, which have caused power and water cuts in many places, including the capital Kyiv.

Kyiv Mayor Vitali Klitschko said in a television interview on Sunday that he could not rule out a total blackout scenario in his city. “We calculate different scenarios in order to resist and be ready,” he says.

More than 4.5 million Ukrainians were without electricity on Sunday evening, most of them in Kyiv and its region, Ukrainian President Volodymyr Zelensky said in his daily address, acknowledging a “very difficult” situation.

The national electricity company Ukrenergo plans a new “energy deficit” for Monday and rotating blackouts from 6 a.m. until the evening. “Consumption should be reduced by 30%” to stabilize the network, explained Ukrenergo.

Mr. Zelensky said “to be aware that the terrorist state (Russia) is concentrating forces and means for a possible repetition of massive attacks on our infrastructures, in particular energy”, and accused Iran of providing for this missiles in Moscow.

He said he discussed Sunday with the President of the European Commission, Ursula von der Leyen, how to “increase the pressure” on Tehran, whose “complicity with Russian terrorism must be punished”.

Also on Sunday, the Kakhovka dam, located 60 km as the crow flies from Kherson and under Russian control, was hit by a Ukrainian missile, without causing any death or injury, according to the Russian occupation authorities.

The Ukrainian general staff assured for its part that in Kakhovka, “an attack (Ukrainian) was carried out against a building housing up to 200 enemy soldiers” and that the Russians “are carefully hiding the consequences of this attack” .

The Kakhovka hydroelectric dam, built along the Dnieper, notably supplies water to the Crimean peninsula, annexed in 2014 by Moscow.

Quoted by Russian agencies, Ruslan Agaev, representative of the administration installed by Moscow in Nova Kakhovka, the village where this work is located, assured that the strike “did not cause critical damage”.

The risk of strikes on this strategic installation has been brandished since October by the Ukrainians and the Russians, who accuse each other of endangering the lives of “thousands” of inhabitants in this part of the region where Kyiv troops have been advancing since september.

The Ukrainian president had accused Moscow two weeks ago of having “undermined the dam”, one of the largest in Ukraine. “Lies”, reacted the Russian occupation authorities.

Over the past three days, the Russian occupation authorities have carried out “evacuations” of civilians in the villages around the site in the face of a “possible missile attack” on the dam, the destruction of which would lead to “the flooding of the left bank of the Dnieper, according to local authorities.

Kyiv has on several occasions condemned these “deportations” of inhabitants of the region to territories less exposed to fighting, even to Russia itself.

On the ground, a 25-year-old Taiwanese volunteer against Russian forces was killed in action, the first known casualty from Taiwan since the start of the invasion of Ukrainian territory, the Foreign Ministry said in Taipei. .

In the Sumy region (north-east), a 62-year-old woman was killed and another woman injured in sustained daytime Russian bombardments on Vorozhbyanska, which included destroying electricity, gas and railway infrastructure, wrote on Twitter regional governor Dmytro Zhivitsky.

In the Donetsk region (east), “violent Russian attacks are underway […] The enemy suffered heavy losses but […] continues to lead its mobilized soldiers and its mercenaries to death,” said the Ukrainian president.

Traveling to Bahrain, Pope Francis said he prayed on Sunday for “Ukraine so martyred and for this war to end”, after more than eight months of conflict which left tens of thousands dead.