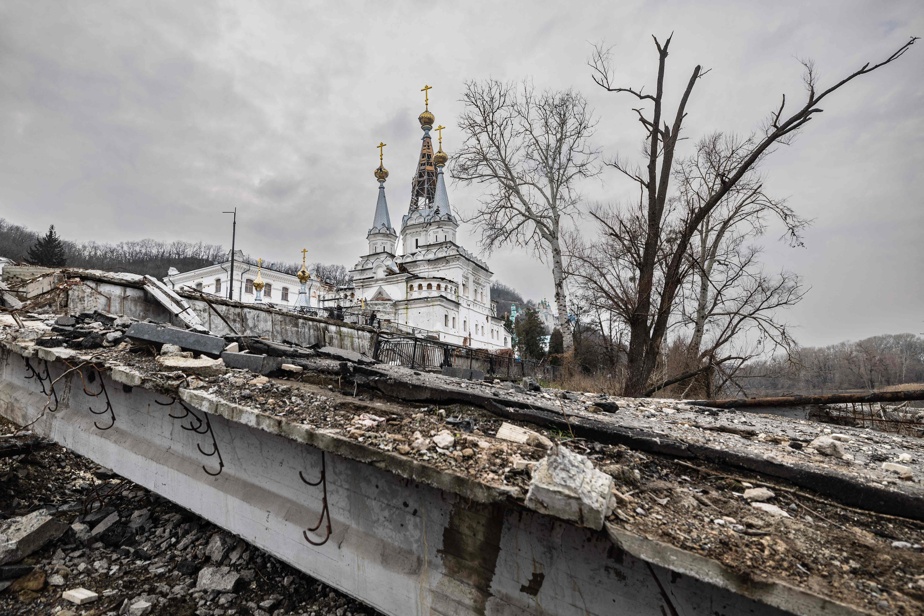 (Moscow) Russia on Monday accused Ukraine of attacking its territory, including launching a drone against an air base in Russian territory, hundreds of kilometers from the front, the second such operation this month.

The Russian security services (FSB) also claimed to have “eliminated” Ukrainian “saboteurs” who were trying to enter the Russian region of Bryansk from Ukraine.

The Ukrainian authorities made no comment, as usual, on these two incidents.

According to Russian news agencies, a Ukrainian drone was shot down as it approached the Engels base in the Saratov region overnight, some 600 km from Ukraine.

“As a result of the fall of the wreckage of the drone, three Russian technicians who were on the airfield were fatally injured”, according to the TASS agency quoting the Ministry of Defense.

This report of three soldiers killed was confirmed by the regional governor, Roman Boussarguine, on his Telegram account.

On December 6, this same Engels base, which houses Russian strategic bombers, had been targeted by Ukrainian drones, according to Moscow, testifying to the ability of certain Ukrainian devices to deceive Russian anti-aircraft defenses.

The FSB also said Monday that a group of Ukrainian “saboteurs” had tried to enter Russian territory on Sunday, in the Briansk region, bordering Ukraine, in possession of weapons and explosives.

“Following armed clashes on December 25, four saboteurs were eliminated,” said the FSB, which is also in charge of border protection.

A video, broadcast by the Ria-Novosti news agency and attributed to the FSB, shows bloodied corpses, surrounded by weapons and dressed in winter camouflage uniforms.

AFP was unable to confirm this information from an independent source.

In recent months, Russia has accused Kyiv of numerous attacks on military sites and important infrastructure.

The truck bomb attack which had partially destroyed the Crimean Bridge, connecting this Ukrainian peninsula annexed by Moscow in 2014 to Russian territory, had constituted a snub for the Kremlin in early October, which also chained setbacks on the battlefield.

Kyiv has never confirmed its involvement in the explosion on this viaduct, but this one led Vladimir Putin to multiply the strikes against the Ukrainian energy infrastructure.

Today, millions of civilians have to live, in the middle of winter, with only a few hours of electricity per day. A large part of the population is also faced with cuts in district heating and running water.

Exclude Moscow from the UN

It is in this context that Ukraine on Monday called for Russia’s exclusion from the UN.

“Ukraine calls on UN member states […] to deprive the Russian Federation of its status as a permanent member of the UN Security Council and to exclude it from the UN as a whole,” the Ukrainian Foreign Ministry said in a statement.

On Sunday, Russian President Vladimir Putin once again sought to justify his military offensive against Ukraine which has lasted for more than 10 months at the cost of heavy losses.

According to him, the West was using Ukraine as a bridgehead to threaten Russia.

“Everything is based on the policy of our geopolitical adversaries, which aims to divide Russia, historic Russia”, denounced Vladimir Putin, ensuring that he wanted to “unite the Russian people” which, according to him, includes the Ukrainians.

According to him, the Russian army is “moving in the right direction”, despite a catastrophic autumn for Moscow, which saw Ukrainian counter-offensives resume in the north, east and south of the territories occupied by Russian forces.

The Ukrainians surprised Russia by fiercely resisting the Russian army for 10 months. Ukrainian forces have also been able to string together military successes since September thanks to increasing military and financial aid from the West.

For Moscow, this is proof that Europeans and Americans are engaged in a proxy war against Russia.

Last week, Ukrainian President Volodymyr Zelensky, leaving his country for the first time since the start of the conflict, traveled to Washington, where his American counterpart Joe Biden promised him a Patriot air defense system and a new envelope of $45 billion.

In the absence of a truce for the end-of-year celebrations, bombardments and fighting still continued in Ukraine.

In recent days, the city of Kherson, reconquered on November 11 by the Ukrainian army, has been particularly targeted, with in particular the bombardment of the city center on Saturday which killed 10 people.

According to the Ukrainian presidency, surrounding localities were struck on Sunday, but without causing any deaths.

Returning to the bloody toll in Kherson, Mr. Zelensky stressed that the Ukrainians should “be aware” that Russia was trying to impose a “dark and difficult” end of the year on them.