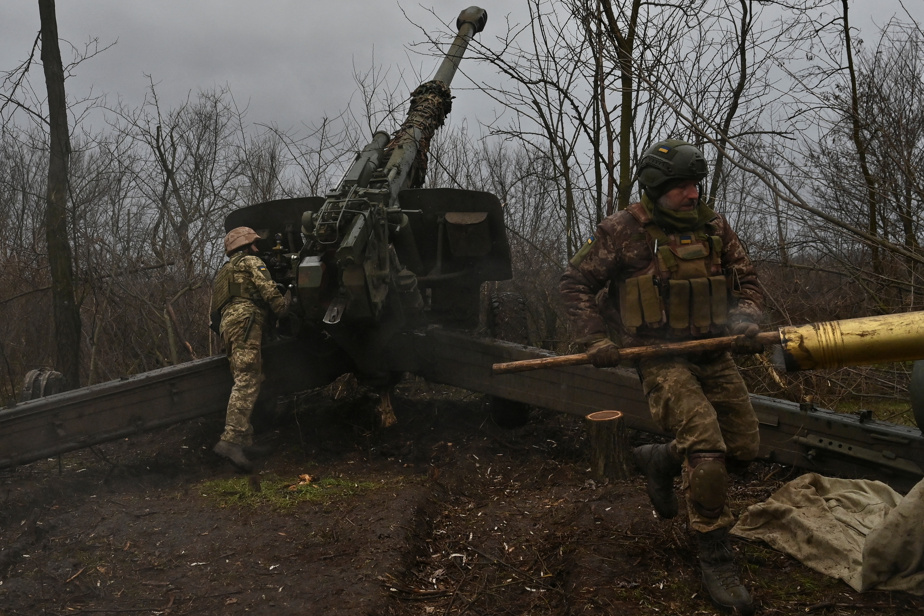 (Moscow) Germany will not “oppose” Poland’s desire to deliver Leopard tanks to Ukraine, which is insistently demanding them, if Warsaw asks for permission, the head of the Russian Federation said on Sunday. German diplomacy, Annalena Baerbock.

“If we were asked the question, we would not oppose it”, declared the minister of the Green Party, which governs in coalition with the Social Democrats of Olaf Scholz, about the delivery to Kyiv of these tanks of German manufacture.

“For the moment, the question has not been asked” by Poland, required to make an official request to Berlin, said the minister, interviewed in Paris on the French channel LCI.

The German government is under increasing pressure to supply Ukraine with heavy Leopard tanks, which could have a significant impact on the battlefield against Russian troops.

“I understood how important these tanks are, we are fully aware of that,” added Mr.me Baerbock

Poland and Finland have offered to deliver Leopards that they own, but they need official approval from Berlin for re-export.

However, Olaf Scholz has so far refused to comment on the question of these indirect deliveries, just like on that of directly supplying Leopards from German stocks.

Again questioned on the question Sunday in Paris, during a press conference alongside Emmanuel Macron, the Chancellor was evasive, repeating the need to act in consultation with the allies of Ukraine on the questions arms delivery.

It is not the first time that the government’s green ministers, in particular Mme Baerbock, take a more proactive line than the Chancellor on the subject of military support for Ukraine.

At a meeting on Friday at the US Ramstein base in Germany, Ukraine’s western allies pushed back on any decision on the matter, angering Kyiv who criticized their “indecision”.

“The front is mobile, especially in two directions: Orikhiv and Gulyaipole,” said Vladimir Rogov, a leader of the regional occupation authority installed by Moscow, quoted by the Russian news agency Ria Novosti.

These two towns, each of about 15,000 inhabitants before the war, are respectively 65 km and 100 km south-east of Zaporijjia, capital of the eponymous region, controlled by Ukrainian troops.

According to Mr. Rogov, “the initiative is in our hands” and fighting is ongoing in these areas.

The Russian Ministry of Defense, for its part, assured Sunday, in its daily update, that “the units of the Eastern Military District occupied more advantageous lines and positions, during offensive operations in the Zaporizhia region”, reiterating its remarks from yesterday.

In its morning bulletin, the Ukrainian army, for its part, only indicated that, on Saturday, “more than 15 localities had been targeted by Russian artillery” in the region of Zaporijjia.

Also on Saturday, the Russian army claimed to have carried out “offensive operations” in this region, taking “advantageous lines and positions” along the way.

Earlier this week, Vladimir Rogov had, for his part, indicated that “the intensity of hostilities” had “sharply” increased “across the entire front line” in this region of southern Ukraine.

The line of contact between the Ukrainian and Russian armies in the Zaporijjia region has been stabilized for several months without major combat, unlike the regions of Donetsk (East) and Kherson (South).

A senior Ukrainian ministerial official suspected of embezzlement was sacked on Sunday, while an internal audit was launched at the Ministry of Defense after press revelations about an alleged contract signed at an inflated price.

“The Cabinet of Ministers of Ukraine orders the dismissal of VM Lozynkiy as Deputy Minister of Development of Communities, Territories and Infrastructure of Ukraine,” Ukrainian Prime Minister Denys Shmygal said on Telegram.

Mr. Lozynkiï, in office since May 2020, “received (400,000 dollars) to facilitate the conclusion of contracts for the purchase of equipment and generators at inflated prices”, had indicated the NABU in a press release.

This dismissal of a politician comes as Ukraine faces electricity shortages following Russian strikes on its energy facilities in the middle of winter.

Embezzlement remains frequent in Ukraine, a country plagued by corruption for decades.

In another case of alleged corruption, the Ukrainian Ministry of Defense on Sunday ordered the launch of “an internal audit” and the holding on Monday of an “emergency meeting” around the Minister of Defense, Oleksiï Reznikov, to shed light on possible inflated contracts by the ministry.

On Saturday, press reports in the national media had accused the Ukrainian ministry of having signed a contract at an overvalued price on food products intended for its soldiers.

According to the ZN news site. UA., the signed contract in question, for 2023, would be for 13 billion hryvnias, or just over $350 million at the current rate, with prices set “two to three higher” than the current tariffs in force for basic food products.

“In case of detection of violations in the activities of officials of the Ministry of Defense, they will be responsible in accordance with the applicable law,” the Ukrainian ministry said in a statement.

“The ministry purchases the relevant products in accordance with the procedure established by law”, however underlined the Ukrainian Ministry of Defense, judging “false” and “misleading” the information released in the press.

“These are disseminated with the intention of deliberately manipulating” and “harm the interests of the defense during a special period”, he lambasted, recalling again that “checks are carried out” on the contracts signed .