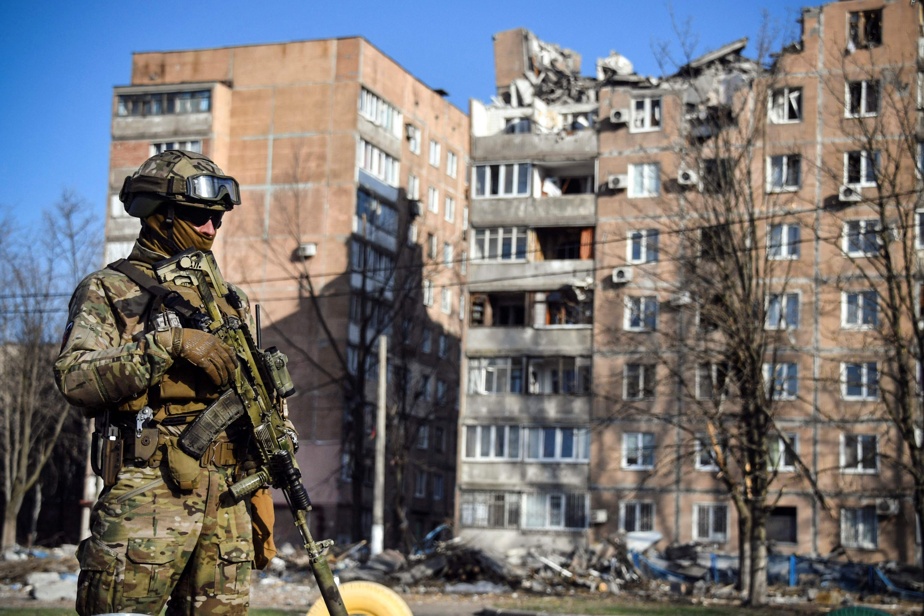 (Kramatorsk) Russian forces are maintaining pressure on the port city of Mariupol and eastern Ukraine on Tuesday, as Kyiv denounces “hundreds of rapes” committed by Russian soldiers since the start of the invasion.

The noose has tightened further on the last Ukrainian troops defending Mariupol, a port city in the south-east of the country besieged for more than 40 days by the Russian army, largely destroyed and where the humanitarian situation is dramatic.

According to Ukrainian presidential adviser Mykhaïlo Podoliak, on Twitter, “Ukrainian soldiers are surrounded and blocked” in the city where “tens of thousands” of people have died and “90% of the houses” have been destroyed.

Taking Mariupol would allow the Russians to consolidate their territorial gains on the coastal strip along the Sea of ​​Azov by connecting the Donbass regions to the Crimean peninsula, which they annexed in 2014.

The Ukrainian forces “continue to defend Mariupol”, assured the Ukrainian army on Telegram on Monday, ensuring that it was always in contact with the units which “heroically hold the city”.

The Russian army said for its part that it had failed on Monday an attempt to break through by a hundred Ukrainian soldiers with armored vehicles which were in a factory in the north of the city, and who were trying to flee it according to it.

Their exit was postponed with “air strikes and artillery fire”, according to Moscow, which says it notably destroyed three tanks and killed around fifty “enemies”, adding that 42 others surrendered.

On Monday evening, Ukrainian President Volodymyr Zelensky again called on his foreign allies to send him more weapons to resist Russian forces and “unblock” the siege of Mariupol.

He also indicated that he takes “very seriously” the threats of chemical weapons in Mariupol brandished by the Russian camp, which denies having already used them so far.

“The information about the chemical attack is not currently confirmed,” moderated Petro Andryushchenko, an adviser to the mayor of Mariupol, on Telegram.

On Tuesday, President Zelensky denounced “hundreds of cases of rape” observed according to him in the areas previously occupied by the Russian army after the start of the invasion on February 24, “including underage girls and very small children “.

The day before, UN officials had called for investigations into violence against women in Ukraine and to protect millions of children displaced by the conflict. “We hear more and more about rape and sexual violence,” said Sima Bahous, director of the UN agency UN Women.

“Almost daily, new mass graves are found,” said Mr. Zelensky, who was addressing the Lithuanian parliament by video link. “Thousands and thousands of victims. Hundreds of cases of torture. We continue to find bodies in the pipes and cellars, ”he continued.

Russian President Vladimir Putin, whose country denies any abuse in Ukraine, on Tuesday described as “fake” reports accusing his soldiers of having massacred hundreds of civilians in Boutcha, a town in the northwestern suburbs of Kyiv, after the withdrawal at the end of March of the Russian soldiers who besieged it for several weeks.

Around Kyiv, the bodies of six people killed by bullets found in a basement in the eastern suburbs, according to the Ukrainian General Prosecutor’s Office, were added on Tuesday to hundreds of others found in the past two weeks in the vicinity of the capital.

These six victims are civilians killed by Russian soldiers, the General Prosecutor’s Office said on Telegram.

In Andriïvka, a village 30 km west of Kyiv which was still on the front line a few weeks ago, AFP journalists witnessed the exhumation of the bodies of other victims, three men in civilian clothes.

Among them, that of Yuri Kravtchennia. According to his wife, Olessia, he was shot dead in the street just after the Russian invasion began, as he held his hands up.

As her remains emerged from the ground, Olessia screamed in pain. She rushed to his side but her legs gave way, and she collapsed. Before lamenting: “It’s been 41 days since he’s been gone and I’m crying. I can’t go on without him.”

In the east, bordering Russia and where Moscow has made the total conquest of the Donbass its priority objective, Kyiv has announced that it expects a major offensive in the short term.

“According to our information, the enemy has almost completed its preparation for an attack on the east. The attack will take place very soon,” warned Ukrainian Defense Ministry spokesman Oleksandre Motouzianik.

“The battle for the Donetsk and Luhansk regions is a crucial moment in the war,” Zelensky’s chief of staff Andrii Yermak said on Telegram.

Civilians continued to flee Luhansk and Donetsk regions, from where six evacuation trains were to leave on Tuesday according to the Luhansk regional administration.

Analysts believe that Vladimir Putin, mired in the face of fierce Ukrainian resistance, wants to secure a victory in this region before the May 9 military parade in Red Square marking the Soviet victory over the Nazis in 1945.

Visiting the Russian Far East on Tuesday, Mr. Putin assured that the offensive of his forces in Ukraine was continuing “calmly” and minimizing losses.

“We are going to act harmoniously, calmly, in accordance with the plan proposed from the outset by the general staff,” Mr. Putin said during a press conference in the Russian Far East, refusing by somewhere else to set a timetable.

Mr. Putin also denounced the attitude of the Ukrainian negotiators which, according to him, prevents an agreement between Kyiv and Moscow from being reached to put an end to the Russian offensive. “I was informed last night that the Ukrainian side had changed something again […] Such a lack of consistency on fundamental points creates difficulties,” he said.

In Warsaw, Polish counterintelligence announced on Tuesday that it had identified and arrested in recent days a Russian spy who was collecting intelligence on Polish and NATO forces, as well as two Belarusians, also suspected of espionage.

More than 4.6 million Ukrainian refugees have fled their country since the invasion ordered by Vladimir Putin on February 24, according to the latest figures published on Tuesday by the High Commissioner for Refugees (UNHCR).

The war in Ukraine has triggered a chain reaction in the global economy with rising energy and food prices that will deepen poverty and hunger, and increase the debt burden, the President of Ukraine said on Tuesday. the World Bank.